Clermont is a city in Lake County, Florida, United States, about 22 miles (35 km) west of Orlando and 22 miles (35 km) southeast of Leesburg. The population was 28,742 in 2010. The city is residential in character and its economy is centered in retail trade, lodging, and tourism-oriented restaurants and bars. It is part of the Orlando–Kissimmee–Sanford Metropolitan Statistical Area.

Clermont is home to the 1956 Florida Citrus Tower, one of Florida's early landmarks. [7] 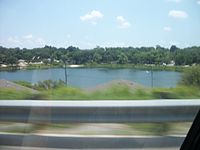 Lake Sunnyside as seen from high above eastbound SR 50, one of many lakes in Clermont.

The Clermont area lies on the northern part of the Lake Wales Ridge. There are rolling hills atypical of the Florida peninsula. Nearby are the Clermont Chain of lakes [9] and Lake Apopka.

According to the Köppen climate classification, Clermont has a humid subtropical climate (Cfa).

Clermont was founded in 1884 and named for the French birthplace of A.F. Wrotniski, manager of the Clermont Improvement Company, formed for land development. [12] The city was incorporated in 1916. Much of the county initiallly was developed as orange and other citrus groves, which was the basis of the economy through the mid-20th century. For instance, Apshawa Groves owned and worked large expanses of land in the county. It later became a major real estate company. Tourism also became increasingly important.

The appearance of the historic downtown district has not changed much since 1962. [13]

The population grew 207% from 2000 to 2010, with commensurate economic growth, attracting big box retail stores. In Spring 2010, the Clermont Landings shopping center opened, featuring 20 shops and restaurants and the city's first cinema. Increased pollution from runoff and residential development has hurt the city's lakes and other natural resources. [14]

21.28% of households had children under the age of 18 living with them, 55.1% were married couples living together, 10.3% had a female householder with no husband present, and 31.5% were non-families. 26.3% of all households were made up of individuals, and 12.5% had someone living alone who was 65 years of age or older. The average household size was 2.29 and the average family size was 2.73.

Lake-Sumter State College and the University of Central Florida have a joint-use campus in Clermont.

The Cooper Memorial Library in Clermont is a joint-use Library staffed by the Lake-Sumter State College and the Lake County Library System.

Downtown Clermont has restaurants, shops, the local Art League, Clermont City Center, and City Hall. [16] The downtown's western area, known as Historic Village, includes sites such as the Townsend House, home to James and Sallie Townsend, the first African-American couple in Clermont. The Historic Village is maintained by the South Lake County Historical Society and the City of Clermont. [17]

The United States Triathlon National Training Center is located in Clermont. Duathlons, Triathlons and cross country races are held at the facility.

Waterfront Park is located along Lake Minneola, The park includes picnic areas, a swimming area, fishing piers and a playground. There are rentals of paddleboards, kayaks and bicycles. A fitness trail that is part of a 30-mile system runs through the park.

The main roads through Clermont consist of State Road 50 and U.S. Route 27.