The park was the site of extensive mining of white kaolin clay in the 19th century that provided the raw material for bricks and terra cotta. After the abandonment of the quarrying operations, rainwater, natural springs, and vegetation filled in the pits. [3] The preserve also contains archaeological evidence of settlements of the Lenape, early European settlers, and the Free Blacks of Sandy Ground.

The park was created in 1977 after extensive lobbying by the Protectors of Pine Oak Woods, a local conservation organization. [3]

Groundbreaking for a $1.3 million nature center was held on May 4, 2007. [6] In October 2008, the center opened with exhibits on the history of the Charleston area and wildlife and plants found within the park. [7] The 3,000-square-foot (280 m2) facility contains exhibit space, classrooms, and an outdoor pavilion. [6] 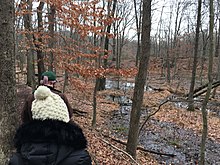 Characteristic park topography and wetlands left over from its prior history, as seen from one of its hiking trails

The purpose of the preserve is to retain the site's unique ecology, as well as to provide educational and recreational opportunities, such a nature walks, pond ecology programs, and birdwatching. Two hiking trails – the Abraham's Pond Trail and the Ellis Swamp Trail – are open to the public near the park headquarters, and horseback riding is permitted on five miles (8.0 km) of bridle paths.

The park has two designated areas, which are set aside for endangered species and are off-limits to the public. [3]