In the city of Atlanta, while the Civil War was well underway, two literate African American ex-enslaves, James Tate, and Grandison B. Daniels in 1862 established the first school in Atlanta for African American children on the corner of Courtland and Jenkins Streets in an old church building of Friendship Baptist Church the original home of First Baptist Church. Ex-enslaves Tate and Daniels along with 25 enslave's founded Friendship Baptist Church, the first black Baptist autonomous congregation. They began holding classes in an old church building built in 1848. The building was badly damaged during the Siege of Atlanta in 1864. The school would later become Atlanta University in September 1865. When white missionary Reverend Frederick Ayer, along with his wife, arrived in Atlanta in November 1865 under the auspices of the American Missionary Association, the AMA church purchased a boxcar for $310 in Chattanooga, Tennessee, and sent it to Friendship by the Ninth Street Baptist Church of Cincinnati, Ohio. The modest space of the boxcar served two purposes: a new teaching space for Atlanta University and a meeting space for the Friendship Church congregation. Tate and Daniels readily transferred their responsibilities to Ayer who was better prepared to lead the educational effort in 1865. [9] [10] [11]

Stone Hall - now Fountain Hall (Morris Brown College) Erected in 1882 on the crest of Diamond Hill on the Morris Brown College campus, Fountain Hall is one of the earlier structures for the original site of Atlanta University. Historically, Fountain Hall is significant to the city, state, and nation for its role in providing higher education to blacks in this country. It was for this reason that Fountain Hall was made a National Historic Landmark in 1975. Architecturally, this building is important as a work of G. L. Norrman. This Atlanta architect was active during the late nineteenth and very early twentieth centuries, but few of his works have survived. The three-story, red brick structure is also an excellent example of the High Victorian style, its clock tower a rare sight in Atlanta. Over its 138yrs. history, Fountain Hall has served as the location for administrative offices, as well as a number of other university activities, contributing greatly to the cultural fabric of the city through the education of its citizens.

From its construction in 1882 until 1929, Fountain Hall primarily functioned as the administration building for Atlanta University, though it contained a chapel, library, recitation rooms, and laboratories during various times in its history. It served in a similar capacity for Morris Brown College for many years. Currently, the structure contains offices, a chapel, art studios, and a gallery. Fountain Hall has been a gathering place and focus of activity in the education process of many of the mostly black Americans attending the university and college since its construction. Because of the building's location, Fountain Hall can be seen from some distance and has long served as an impressive and identifying landmark for the historic Atlanta University Center.

In the early 1930s, Morris Brown College was in financial trouble and was forced to give up its property at Houston and Boulevard. Since its affiliation with Spelman and Morehouse, Atlanta University was no longer using several of its original buildings. So In 1932, Bishop W. A. Fountain, former college president and then Chairman of the Board of Trustees, and his son, W. A. Fountain, Jr., President of Morris Brown, negotiated for the college to become part of the university system and lease some of the vacant buildings on the old campus. It was after this, that Stone Hall became known as Fountain Hall, named for Bishop William A. Fountain. In the 1929, the college deeded the buildings, establishing a permanent home for Morris Brown College. [22]

Clark College was founded in 1869 by the Methodist Episcopal Church, which later became the United Methodist Church as the nation's first four-year liberal arts college to serve the primarily African-American student population. Clark University was chartered and incorporated in 1877; first offered instruction at the postsecondary level in 1879; awarded its first degree (baccalaureate) in 1880 and became Clark College in 1940. [23] It was named for Bishop Davis Wasgatt Clark, who was the first President of the Freedman's Aid Society and became Bishop in 1864. A sparsely furnished room in Clark Chapel, a Methodist Episcopal church in Atlanta's Summerhill section, housed the first Clark College class. In 1871, the school relocated to a new site on the newly purchased Whitehall and McDaniel Street property. In 1877, the School was chartered as Clark University.

An early benefactor, Bishop Gilbert Haven, visualized Clark as the "university" of all the Methodist schools founded for the education of freedmen. After the school changed locations several times, Bishop Haven, who succeeded Bishop Clark, was instrumental in acquiring 450 acres (1.8 km2) in South Atlanta, where in 1880 the school conferred its first degree. In 1883, Clark established a theology department named for Dr. Elijah H. Gammon. In 1888 the Gammon School of Theology became an independent theological seminary and is currently part of the Interdenominational Theological Center. Clark College merged with Atlanta University July 1, 1988 to form Clark Atlanta University.

In 2020, MacKenzie Scott donated $15 million to Clark Atlanta University. Her donation is the largest single gift in the history of the institution. [24] 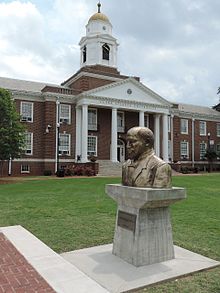 All undergraduate students with under 58 credits hours are required to live on campus. [25]

Clark Atlanta is the most comprehensive institution in the Atlanta University Center offering over 40 degrees at the bachelor's, master's, and doctoral levels.

The Isabella T. Jenkins Honors Program is a selective academic program established to provide a close-knit and uniquely stimulating community for high-achieving undergraduates at Clark Atlanta. [29]

Clark Atlanta is annually ranked on the list of The Washington Monthly "Best Colleges and Universities" and consistently ranked a top 20 HBCU by US News & World Report (No. 13). [30]

Clark Atlanta's social work graduate program consistently ranks among the 100 best in the nation by US News & World Report. [31]

Clark Atlanta's Center for Functional Nanoscale Measures (CFNM) has produced more black Ph.D.s in Nanoscale Science than any HBCU in the nation. [32]

All new undergraduate students are required to attend "CAU Experience", which is five days of events orchestrated to help them get better acquainted with the legacy, traditions, culture, and community of Clark Atlanta University. The preeminent scheduled event is the formal induction ceremony where new undergraduate students are officially inducted as CAU Panthers. "CAU Experience" is mostly led by enthusiastic and trained student leaders known as "OGs" which is an abbreviation for Orientation Guides. [35]

The university's marching band is known as the Mighty Marching Panther Band. "Essence" is the dance-line featured with the marching band. The band was featured in the 2002 movie Drumline.

The CAU Panther is the student newspaper.

CAU operates WCLK (91.9 FM), Atlanta's only jazz radio station and one of the longest running in the world.

See also: Category:Clark Atlanta University alumni
This is a dynamic list and may never be able to satisfy particular standards for completeness. You can help by adding missing items with reliable sources.