Chiyoda (千代田区, Chiyoda-ku) is a special ward located in central Tokyo, Japan. It is known as Chiyoda City in English. [2]

It was formed in 1947 as a merger of Kanda and Kōjimachi wards following Tokyo City's transformation into Tokyo Metropolis. The modern Chiyoda ward exhibits contrasting Shitamachi and Yamanote geographical and cultural divisions. The Kanda area is in the core of Shitamachi, [3] the original commercial center of Edo-Tokyo. On the other hand, the western part of the Kōjimachi area typically represents a Yamanote district.

Chiyoda consists of the Imperial Palace and a surrounding radius of about a kilometer. As of October 2020, the ward has a population of 66,680, and a population density of 5,709 people per km², making it by far the least populated of the special wards. The total area is 11.66 km², of which the Imperial Palace, Hibiya Park, National Museum of Modern Art, and Yasukuni Shrine take up approximately 2.6 km², or 22% of the total area.

Chiyoda is an economical powerhouse, the small area East of the palace in the districts of Otemachi, Marunouchi and Yurakucho (colloquially "Daimaruyu") houses the headquarters of 19 Fortune 500 companies, and is the source of roughly 10% of the combined revenue of all Japanese companies [4] and produced in 2017 the equivalent of around 1/4th of the GDP of the country. [5] With a day population of around 850,000, its day/night population ratio is by very far the highest of all municipalities in Japan.

Chiyoda is also the political center of the country. [6] Chiyoda, literally meaning " field of a thousand generations", inherited the name from the Chiyoda Castle (the other name for Edo Castle, today's Imperial Palace). With the seat of the Emperor in the Imperial Palace at the ward's center, many government institutions, such as the National Diet, the Prime Minister's Official Residence, the Supreme Court, ministries, and agencies are also located in Chiyoda, as are Tokyo landmarks such as Tokyo Station, Yasukuni Shrine and the Budokan. The neighborhood Akihabara is also located in Chiyoda, as are twenty embassies and consulates.

Chiyoda has been a site of a number of historical events.

At the tip of Musashino plateau, Chiyoda is located at the very heart of former Tokyo City in eastern mainland Tokyo. The central area of the ward is furthermore occupied by the Imperial Palace. The east side of the ward, bordering Chūō, is the location of Tokyo Station. The south side, bordering Minato, encompasses Hibiya Park and the National Diet Building. It is almost exclusively occupied by administrations and agencies. The west and northwest are primarily upper class residential; the Yasukuni Shrine is also there. The "high lantern" of Kudanzaka slope was not originally built as a lighthouse, but was built as a lantern for the Shrine. Originally steep and with steps, the slope was considerably softened during remediation after the Kanto earthquake. [7] To the north and northeast of the ward are several residential neighborhoods and the Akihabara commercial district. 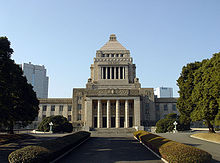 Chiyoda is run by a directly elected mayor and a city assembly of 25 elected members. The current mayor is Takaaki Higuchi.

For the Metropolitan Assembly, Chiyoda forms a single-member electoral district. It had been represented by Liberal Democrats for 50 years until the landslide 2009 election when then 26-year-old Democratic newcomer Zenkō Kurishita unseated 70-year-old former Metropolitan Assembly president and six term assemblyman, Liberal Democrat Shigeru Uchida. [8] In the 2013 election, no Democrat contested the seat and Uchida won back the district against a Communist and two independents.

The Tokyo Fire Department has its headquarters in Ōtemachi in Chiyoda. [9]

For the national House of Representatives, Chiyoda, together with Minato and Shinjuku, forms the prefecture's 1st electoral district since the electoral reform of the 1990s. The district is currently represented by Constitutional Democrat Banri Kaieda.

Embassy of the United Kingdom, Tokyo

Some of the districts in Chiyoda are actually not inhabited, either because they are parks (Hibiya Koen), because they consist only of office buildings (Otemachi or Marunouchi), and/or because they are extremely small. The area on the eastern side of Akihabara Station is the location of several districts that cover at most a few buildings. Kanda-Hanaokachō is, for example, limited to the Akihabara Station and the Yodobashi Camera department store. Understanding the address system in the Kanda area can be particularly troublesome for non-locals.

The list below consists of the many smaller neighborhoods of the Kanda area, for which a modernization of the addressing system has not been enforced yet except Kanda-Sarugakuchō and Kanda-Misakichō. All officially start with the prefix "Kanda-", but it is sometimes omitted in daily life. Note that Iwamotochō and Kanda-Iwamotochō are different districts (as is the case for Kajichō and Kanda-Kajichō) 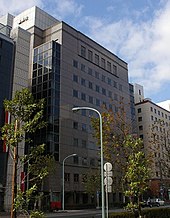 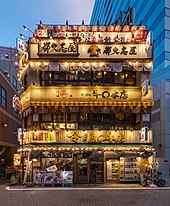 Illuminated facade of a 3-storey restaurant in Chiyoda

Home to the massive Tokyo station with a multitude of subways, railways and long-distance services.

Hitotsubashi University's Graduate School of International Corporate Strategy is located in the National Center of Sciences in Hitotsubashi. Both of the Sophia University Campuses are in western Chiyoda. The main Yotsuya campus lies adjacent to Yotsuya Station and the Ichigaya Campus just south of Ichigaya Station.

East Imperial Garden, located on the eastern portion of the Tokyo Imperial Palace grounds and housing the castle tower and the outer defense positions of the former Edo Castle, opened to the public in 1968. Kitanomaru Park, located on Edo Castle's former northern section, has the Tokyo National Museum of Modern Art and the Nippon Budokan, a venue for performances. Chidorigafuchi Boat Arena and Chidorigafuchi Moat Path includes a waterway for boats. National Diet Building Park, located adjacent to the Diet Building and divided in two by a street, includes American dogwoods planted to symbolize the relations between the United States and Japan. Hibiya Park, Japan's first western-style park, includes restaurants, open-air concert halls, and tennis courts. Imperial Palace Outer Garden, in the front of Nijubashi Bridge, serves as a jogging trail and a tourist site. [91]

Wikivoyage has a travel guide for Chiyoda.
Retrieved from " https://en.wikipedia.org/?title=Chiyoda,_Tokyo&oldid=1108609079"
Categories:
Hidden categories: