Waves of Chinese emigration have happened throughout history. They include the emigration to Southeast Asia beginning from the 10th century during the Tang dynasty, to the Americas during the 19th century, particularly during the California gold rush in the mid-1800s; general emigration initially around the early to mid 20th century which was mainly caused by corruption, starvation, and war due to the Warlord Era, the Second Sino-Japanese War and the Chinese Civil War; and finally elective emigration to various countries. Most emigrants were peasants and manual labourers, although there were also educated individuals who brought their various expertises to their new destinations. 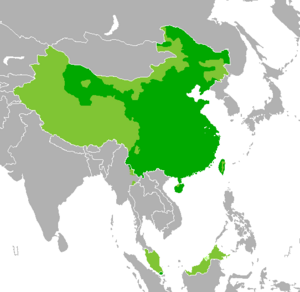 The Sinophone world, a legacy of Chinese emigration to Southeast Asia (Nanyang) 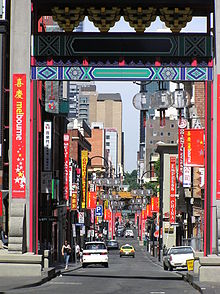 Established in the 19th century by Chinese immigrants, Chinatown, Melbourne is the longest continuous Chinese settlement in the Western World and the oldest Chinatown in the Southern Hemisphere. [25] [26] [27] [28]

The Buddha Tooth Relic Temple and Museum in Singapore. Singapore is a Chinese-majority multi-cultural and multi-racial country in Southeast Asia.

In the early 1960s, about 100,000 people were allowed to enter Hong Kong. In the late 1970s, vigilance against illegal migration to Hong Kong（香港） was again relaxed. Perhaps as many as 200,000 reached Hong Kong in 1979, but in 1980 authorities on both sides resumed concerted efforts to reduce the flow.

More liberalized emigration policies enacted in the 1980s as part of the Opening of China facilitated the legal departure of increasing numbers of Chinese who joined their overseas Chinese relatives and friends. The Four Modernizations program, which required Chinese students and scholars, particularly scientists, to be able to attend foreign education and research institutions, brought about increased contact with the outside world, particularly the industrialized nations.

In 1983, emigration restrictions were eased as a result in part of the economic open-door policy. In 1984, more than 11,500 business visas were issued to Chinese citizens, and in 1985, approximately 15,000 Chinese scholars and students were in the United States alone. Any student who had the economic resources could apply for permission to study abroad. United States consular offices issued more than 12,500 immigrant visas in 1984, and there were 60,000 Chinese with approved visa petitions in the immigration queue.

The signing of the United States–China Consular Convention in 1983 demonstrated the commitment to more liberal emigration policies. Both sides agreed to permit travel for the purpose of family reunification and to facilitate travel for individuals who claim both Chinese and United States citizenship. However, emigrating from China remained a complicated and lengthy process mainly because many countries were unwilling or unable to accept the large numbers of people who wished to emigrate. Other difficulties included bureaucratic delays and, in some cases, a reluctance on the part of Chinese authorities to issue passports and exit permits to individuals making notable contributions to the modernization effort.

New York City's multiple Chinatowns in Queens (法拉盛華埠), Manhattan (紐約華埠), and Brooklyn (布鲁克林華埠) are successful as traditionally urban enclaves, as large-scale Chinese immigration continues into New York during the late 20th century [1] [2] [34] [35] with the largest metropolitan Chinese population outside Asia, [36] The New York metropolitan area contains the largest ethnic Chinese population outside of Asia, comprising an estimated 893,697 uniracial individuals as of 2017. [37] There has additionally been a significant element of illegal Chinese emigration to Brooklyn and Queens, most notably Fuzhou immigrants from Fujian Province and Wenzhou immigrants from Zhejiang Province in Mainland China. [38]

A much smaller wave of Chinese immigration to Singapore came after the 1990s, holding the citizenship of the People's Republic of China and mostly Mandarin-speaking Chinese from northern China. The only significant immigration to China has been by the overseas Chinese, who in the years since 1949 have been offered various enticements to repatriate to their homeland. Several million may have done so since 1949.