From Wikipedia, the free encyclopedia
Annual music festival in the United States

The Chicago Blues Festival is an annual event held in June, [1] that features three days of performances by top-tier blues musicians, both old favorites and the up-and-coming. It is hosted by the City of Chicago Department of Cultural Affairs and Special Events (formerly the Mayor's Office of Special Events), and always occurs in early June. Until 2017, the event always took place at and around Petrillo Music Shell in Grant Park, adjacent to the Lake Michigan waterfront east of the Loop in Chicago. In 2017, the festival was moved to the nearby Millennium Park. [2]

History of the festival 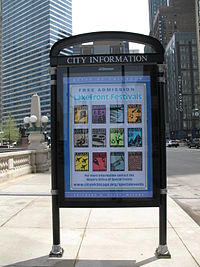 The Blues Festival is among the most important annual public festivities in the city.

Chicago has a storied history with blues that goes back generations stemming from the Great Migration from the South and particularly the Mississippi Delta region in pursuit of advancement and better career possibilities for musicians. [3] [4] Created by Commissioner of Cultural Affairs Lois Weisberg, the festival began in 1984, [4] a year after the death of McKinley Morganfield, better known as Muddy Waters, who is generally considered "the father of Chicago blues". [5] Each year the organizers choose a theme, generally to honor a recently departed blues musician. [6] Obviously, Chicago blues acts are common. In 2015, the festival celebrated the centenary of the births of Muddy Waters and Willie Dixon. The Centennial Tribute featured several musicians who had played with Muddy Waters as well as his sons Mud Morganfield and Big Bill Morganfield, with Alex Dixon playing bass. Also, in keeping with the blues' influence on other musical genres, there are some soul, jazz blues and blues-rock acts.

Since those early beginnings the festival has risen to a status that the City of Chicago has billed as the world's largest free concert of its kind, and the largest of the city's music festivals. [7] For many years through 2016, the festival's "Route 66 Roadhouse" side stage was located a few yards north of historic old U.S. Route 66 (Jackson Boulevard, with traffic closed off for the festival), and a block west of Route 66's former eastern terminus at US 41 Lake Shore Drive. [8]