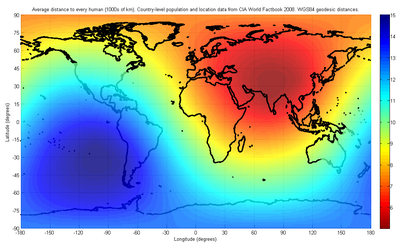 For representational purposes only: The point on earth closest to everyone in the world on average was calculated to be in Central Asia, with a mean distance of 5,000 kilometers (3,000 mi). Its antipodal point is correspondingly the farthest point from everyone on earth, and is located in the South Pacific near Easter Island, with a mean distance of 15,000 kilometers (9,300 mi). The data used by this figure is lumped at the country level, and is therefore precise only to country-scale distances, larger nations heavily skewed. Far more granular data -- kilometer level, is now available -- and compares with this old "textbook" example.

In demographics, the center of population (or population center) of a region is a geographical point that describes a centerpoint of the region's population. There are several ways of defining such a "center point", leading to different geographical locations; these are often confused. [1]

A further complication is caused by the curved shape of the Earth. Different center points are obtained depending on whether the center is computed in three-dimensional space, or restricted to the curved surface, or computed using a flat map projection.

The mean center, or centroid, is the point on which a rigid, weightless map would balance perfectly, if the population members are represented as points of equal mass.

Mathematically, the centroid is the point to which the population has the smallest possible sum of squared distances. It is easily found by taking the arithmetic mean of each coordinate. If defined in the three-dimensional space, the centroid of points on the Earth's surface is actually inside the Earth. This point could then be projected back to the surface. Alternatively, one could define the centroid directly on a flat map projection; this is, for example, the definition that the US Census Bureau uses.

Contrary to a common misconception, the centroid does not minimize the average distance to the population. That property belongs to the geometric median.

The median center is the intersection of two perpendicular lines, each of which divides the population into two equal halves. [2] Typically these two lines are chosen to be a parallel (a line of latitude) and a meridian (a line of longitude). In that case, this center is easily found by taking separately the medians of the population's latitude and longitude coordinates. John Tukey called this the cross median. [3]

The geometric median is the point to which the population has the smallest possible sum of distances (or equivalently, the smallest average distance). Because of this property, it is also known as the point of minimum aggregate travel. Unfortunately, there is no direct closed-form expression for the geometric median; it is typically computed using iterative methods.[ citation needed]

Practical uses for finding the center of population include locating possible sites for forward capitals, such as Brasília, Nur-Sultan or Austin, and, along the same lines, to make tax collection easier. Practical selection of a new site for a capital is a complex problem that depends also on population density patterns and transportation networks.

It is important to use a method that does not depend on a two-dimensional projection when dealing with the entire world. In a study from the Institut national d'études démographiques, [4] the solution methodology deals only with the globe. As a result, the answer is independent of which map projection is used or where it is centered. As described above, the exact location of the center of population will depend on both the granularity of the population data used, and the distance metric. With geodesic distances as the metric, and a granularity of 1,000 kilometers (600 mi), meaning that two population centers within 1000 km of each other are treated as part of a larger common population center of intermediate location, the world's center of population is found to lie where South Asia meets Central Asia [5] with an average distance of 5,200 kilometers (3,200 mi) to all humans. [4] The data used in the reference support this result to a precision of only a few hundred kilometers, hence the exact location is not known. Another analysis utilising city level population data found that the world's center of population is located close to Almaty, Kazakhstan. [6]

Australia's population centroid is in central New South Wales. By 1996 it had moved only a little to the north-west since 1911. [7]

In Canada, a 1986 study placed the point of minimum aggregate travel just north of Toronto in the city of Richmond Hill, and moving westward at a rate of approximately 2 metres per day. [8]

China's population centroid has wandered within southern Henan from 1952 to 2005. Incidentally, the two end point dates are remarkably close to each other. [9] China also plots its economic centroid or center of economy/GDP, which has also wandered, and is generally located at the eastern Henan borders. 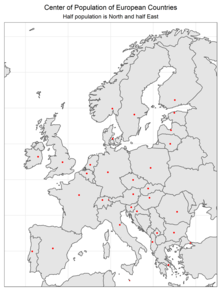 In Finland, the point of minimum aggregate travel is located in the former municipality of Hauho. [11] It is moving slightly to the south-west-west every year because people are moving out of the peripheral areas of northern and eastern Finland.

In Germany, the centroid of the population is located in Spangenberg, Hesse, close to Kassel. [12]

The centre of population in Great Britain did not move significantly in the 20th century. In 1901, it was in Rodsley, Derbyshire and in 1911 in Longford. In 1971 it was at Newhall, Swadlincote, South Derbyshire and in 2000, it was in Appleby Parva, Leicestershire. [13] [14] Using the 2011 census the population center can be calculated at Snarestone, Swadlincote. [15]

The centroid of population of Japan is in Gifu Prefecture, almost directly north of Nagoya city, and has been moving east-southeast for the past few decades. [18] More recently,[ when?] the only large regions in Japan with significant population growth have been in Greater Nagoya and Greater Tokyo. 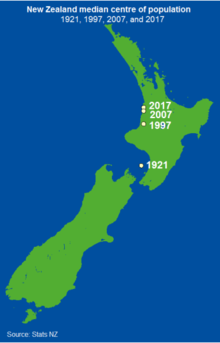 In June 2008, New Zealand's median center of population was located near Taharoa, around 100 km (65 mi) southwest of Hamilton on the North Island's west coast. [19] In 1900 it was near Nelson and has been moving steadily north (towards Auckland, the country's most populous city) ever since. [20]

The demographical center of Sweden (using the median center definition) is Hjortkvarn in Hallsberg Municipality, Örebro county. Between the 1989 and 2007 census the point moved a few kilometres to the south, due to a decreasing population in northern Sweden and immigration to the south. [21]

The center of population of Taiwan is located in Heping District, Taichung. [23]

The mean center of the United States population (using the centroid definition) has been calculated for each U.S. Census since 1790. Over the last two centuries, it has progressed westward and, since 1930, southwesterly, reflecting population drift. For example, in 2010, the mean center was located near Plato, Missouri, in the south-central part of the state, whereas, in 1790, it was in Kent County, Maryland, 47 miles (76 km) east-northeast of the future federal capital, Washington, D.C.