From Wikipedia, the free encyclopedia
(Redirected from Caribbeans in New York City)

Caribbean immigration to New York City has been prevalent since the late 1800s and the early 1900s. [1] This immigration wave has seen large numbers of people from Jamaica, Haiti, Cuba, Dominican Republic, Antigua and Barbuda, Guyana, and Trinidad and Tobago, among others, come to New York City in the 20th and 21st centuries. (There has also been significant migration from Puerto Rico, but this is not considered immigration as Puerto Ricans hold United States citizenship.)

In 1613, Juan (Jan) Rodriguez from Santo Domingo became the first non-indigenous person to settle in what was then known as New Amsterdam. [2]

In the early 1900s, the largest number of black immigrants were English-speaking Caribbeans ( West Indians) who settled in the Northeast, mainly in New York City. These immigrants were only 1.3 percent of the NYC population and faced intense racism and xenophobia, but by 1923 they became a 12.7 percent of the city's population. Many of these immigrants were young, unmarried men. According to Winston James[ citation needed], a few women arrived and held occupations as teachers, doctors, lawyers, and craftsmen. James also comments that many of these immigrants had literacy levels above American blacks and even some whites. In New York, many Caribbean immigrants entered the service sector working as doorman, laborers, and porters. Women often worked in the domestic field as maids and nannies. Reimers points out that a substantial number of Caribbean immigrants attended night school and pursued higher education while in America.

New York City also witnessed the institution building of Caribbean blacks. Majority of Caribbeans were Anglican and after being denied entry into white Episcopal churches, they formed Black Episcopalian churches such as Saint Augustine and Christ Church Cathedral in Brooklyn. In Harlem, West Indian Methodist and Episcopalian churches thrived. West Indians also developed non-religious institutions with the purpose of fostering mutual benefits societies. The intention of these organizations was financially and socially assist "newcomers" or recent immigrants. Membership was based on the immigrant's country of origin. Some of these groups include the Bermuda Benevolent Association (founded 1897), the Sons and Daughters of Barbados, Trinidad Benevolent Association, and the Grenada Mutual Association. Perhaps the most well-known Caribbean emigrant of the 20th century was Jamaican-born Marcus Garvey who came to America and established his organization, Universal Negro Improvement Association (U.N.I.A.). This organization was based on Black nationalism that promoted the economic development of blacks. Garvey's program gained widespread support of the many Caribbean and native-born blacks. Winston James shows that many West Indians wanted UNIA to move beyond economic emphasis and to overtly oppose racism that they faced on a daily basis as black immigrants. Radical West Indians, like Hubert Harrison (a Virgin Islander), wanted to do away with what they believed to be a racist capitalist society. These politically radical West Indian immigrants vied for socialism. The African Blood Brothers was founded by Caribbeans in 1919 and was an organization that combined socialism and Black Nationalism. However, this organization never gained a substantial following. Evidence shows that most West Indians who were able to attain citizenship voted for the Democratic Party. In New York, as black Caribbean immigrants began to grow in size, a small number ran for political offices. During the 1930s and the Depression era, Caribbean immigration trailed off and fewer black immigrants traveled to New York City because of the scarcity of employment opportunities. [3]

New York City has large populations of Caribbean including Puerto Ricans, Dominicans, and with smaller numbers of Panamanians, Cubans, Hondurans, and Costa Ricans.

Immigration records of Dominicans in the United States date from the late 19th century and New York City has had a Dominican community since the 1970s. From the 1960s onward, after the fall of the Rafael Trujillo military regime, large waves of migration have thoroughly transnationalized the Dominican Republic, metaphorically blurring its frontier with the United States.

Puerto Ricans are Americans citizens by birth, so they are not immigrants. 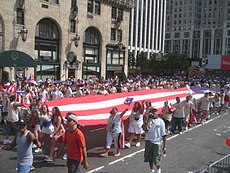 New York City has the largest Puerto Rican population outside of Puerto Rico. Puerto Ricans, due to the forced change of the citizenship status of the island's residents, can technically be said to have come to the City first as immigrants and subsequently as migrants. The first group of Puerto Ricans moved to New York in the mid-19th century, when Puerto Rico was a Spanish colony and its people Spanish subjects. The following wave of Puerto Ricans to move to New York did so after the Spanish–American War of 1898 made Puerto Rico a U.S. possession and after the Jones–Shafroth Act of 1917 gave Puerto Ricans U.S. citizenship, which allows travel without the need of a passport between the island and the United States mainland. The largest wave of migration came in the 1950s, in what became known as "The Great Migration"; as a result, more than a million Puerto Ricans once called New York City home. Presently the Puerto Rican population is around 800,000.

Puerto Ricans have historically lived in neighborhoods such as the Lower East Side (also known in the community as Loisaida), Spanish Harlem and Williamsburg, Brooklyn since the 1950s. There are large Puerto Rican populations throughout the 5 boroughs, with the Bronx having the largest. Currently, Bushwick and several South Bronx neighborhoods, such as Soundview, have some of the largest numbers of Puerto Ricans in the city. However, there has been an increase in Puerto Ricans in outlying areas of the city, such as the North Shore of Staten Island, and the eastern Bronx.