From Wikipedia, the free encyclopedia
Historical aspects of the capital cities of Japan

The current capital of Japan is Tokyo. [1] [2] [3] In the course of history, the national capital has been in many locations other than Tokyo.

Traditionally, the home of the Emperor is considered the capital. From 794 through 1868, the Emperor lived in Heian-kyō, modern-day Kyoto. [4] [5] After 1868, the seat of the Government of Japan and the location of the Emperor's home was moved to Edo, which it renamed Tokyo. [6]

In 1941, the Ministry of Education published the "designation of Tokyo as capital" (東京奠都, Tōkyō-tento). [7]

While no laws have designated Tokyo as the Japanese capital, many laws have defined a "capital area" (首都圏, shuto-ken) that incorporates Tokyo. Article 2 of the Capital Area Consolidation Law (首都圏整備法) of 1956 states: "In this Act, the term 'capital area' shall denote a broad region comprising both the territory of the Tokyo Metropolis as well as outlying regions designated by cabinet order." This implies that the government has designated Tokyo as the capital of Japan, although (again) it is not explicitly stated, and the definition of the "capital area" is purposely restricted to the terms of that specific law. [8]

Other laws referring to this "capital area" include the Capital Expressway Public Corporation Law (首都高速道路公団法) and the Capital Area Greenbelt Preservation Law (首都圏近郊緑地保全法). [9]

This term for capital was never used to refer to Kyoto. Indeed, shuto came into use during the 1860s as a gloss of the English term "capital".

The Ministry of Education published a book called "History of the Restoration" in 1941. This book referred to "designating Tokyo as capital" (東京奠都, Tōkyō-tento) without talking about "relocating the capital to Tokyo" (東京遷都, Tōkyō-sento). A contemporary history textbook states that the Meiji government "moved the capital (shuto) from Kyoto to Tokyo" without using the sento term. [7]

As of 2007, there is a movement to transfer the government functions of the capital from Tokyo while retaining Tokyo as the de facto capital, with the Gifu-Aichi region, the Mie-Kio region and other regions submitting bids for a de jure capital. Officially, the relocation is referred to as "capital functions relocation" instead of "capital relocation", or as "relocation of the Diet and other organizations". [10] [11]

This list of legendary capitals of Japan begins with the reign of Emperor Jimmu. The names of the Imperial palaces are in parentheses:

This list of capitals includes the Imperial palaces names in parentheses. 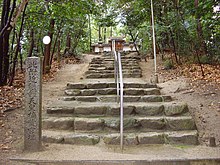 Media related to Capital of Japan at Wikimedia Commons