Canary Wharf is an area of London, England, located near the Isle of Dogs in the London Borough of Tower Hamlets. Canary Wharf is defined by the Greater London Authority as being part of London's central business district, alongside Central London. [1] With the City of London, it constitutes one of the main financial centres in the United Kingdom and the world, [2] containing many high-rise buildings including the third-tallest in the UK, One Canada Square, [3] which opened on 26 August 1991. [4]

Developed on the site of the former West India Docks, Canary Wharf contains around 16,000,000 sq ft (1,500,000 m2) of office and retail space. It has many open areas, including Canada Square, Cabot Square and Westferry Circus. Together with Heron Quays and Wood Wharf, it forms the Canary Wharf Estate, around 97 acres (39 ha) in area. 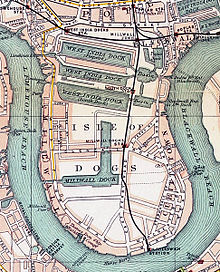 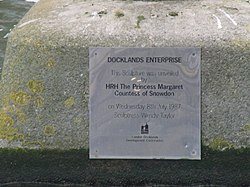 Canary Wharf is located on the West India Docks on the Isle of Dogs.

From 1802 to the late 1980s, what would become the Canary Wharf Estate was a part of the Isle of Dogs ( Millwall), Limehouse, and Poplar and was one of the busiest docks in the world. West India Docks was primarily developed by Robert Milligan (c. 1746–1809) who set up the West India Dock Company.

The Port of London Authority was established in 1909 and took control of West India Dock. Canary Wharf itself takes its name from No. 32 berth of the West Wood Quay of the Import Dock. This was built in 1936 for Fruit Lines Ltd, a subsidiary of Fred Olsen Lines for the Mediterranean and Canary Islands fruit trade. It is located on the Isle of Dogs, the quay and warehouse were given the name Canary Wharf. [5]

After the 1960s, when cargo became containerized, port industry began to decline, leading to all the docks being closed by 1980. [6] [7] After the docks closed in 1980, the British Government adopted policies to stimulate redevelopment of the area, including the creation of the London Docklands Development Corporation (LDDC) in 1981 and the granting of Urban Enterprise Zone status to the Isle of Dogs in 1982. [7]

The Canary Wharf of today began when Michael von Clemm, former chairman of Credit Suisse First Boston (CSFB), came up with the idea to convert Canary Wharf into a back office. Further discussions with G Ware Travelstead led to proposals for a new business district and included the LDDC developing an inexpensive light metro scheme, the Docklands Light Railway, to make use of a large amount of redundant railway infrastructure and to improve access.

The project was sold to the Canadian company Olympia & York [8] and construction began in 1988, master-planned by Skidmore, Owings & Merrill with Yorke Rosenberg Mardall as their UK advisors, and subsequently by Koetter Kim. The first buildings were completed in 1991, including One Canada Square, which became the UK's tallest building at the time and a symbol of the regeneration of Docklands. By the time it opened, the London commercial property market had collapsed, and Olympia and York Canary Wharf Limited filed for bankruptcy in May 1992.

Initially, the City of London saw Canary Wharf as an existential threat. It modified its planning laws to expand the provision of new offices in the City of London, for example, creating offices above railway stations (Blackfriars) and roads ( Alban Gate). The resulting oversupply of office space contributed to the failure of the Canary Wharf project.

In October 1995, an international consortium that included investors such as Alwaleed, bought control for $1.2 billion. Paul Reichmann, of Olympia & York, was named chairman, and Canary Wharf went public in 1999. [9] The new company was called Canary Wharf Limited, and later became Canary Wharf Group.

In 1997, some residents living on the Isle of Dogs launched a lawsuit against Canary Wharf Ltd for private nuisance because the tower interfered with TV signals. The residents lost the case. [10]

Recovery in the property market generally, coupled with continuing demand for large floorplate Grade A office space, slowly improved the level of interest. A critical event in the recovery was the much-delayed start of work on the Jubilee Line Extension, which the government wanted ready for the Millennium celebrations.

In March 2004, Canary Wharf Group plc. was taken over by a consortium of investors, backed by its largest shareholder Glick Family Investments [11] and led by Morgan Stanley using a vehicle named Songbird Estates plc.

This table lists completed buildings in Canary Wharf that are at least 100 metres tall.

West India Quays and Poplar Dock are two marinas that are used as moorings for barges and private leisure river craft and is owned by the Canal & River Trust. [28] [29]

A local public library, called Idea Store Canary Wharf, is in Churchill Place shopping mall and run by Tower Hamlets Council which opened on Thursday 16 March 2006 as part of the Idea Store project [30] and is the borough fourth Idea Store. [31]

Canada Square is one of the central squares at Canary Wharf. It is a large open space with grass, except during the winter when it is converted into an ice rink. The square is named after Canada, because the original developers of modern Canary Wharf, Olympia & York, wanted to reflect their heritage. Underneath the square is Canada Place shopping mall.

Westferry Circus is on the west side of Canary Wharf. It is a garden at ground level, and below is a roundabout allowing traffic to flow through. The garden is enclosed by bespoke hand-crafted ornamental railings and entrance gates by artist Giuseppe Lund. The area has a long history, dating back to 1812, when the Poplar and Greenwich Roads Company operated a horse ferry between Greenwich and the Isle of Dogs. It operated on the West Ferry and East Ferry Roads, which the names survived. Westferry Circus was chosen as the name for the roundabout and park by virtue of its proximity to Westferry Road.

Cabot Square is one of the biggest squares at Canary Wharf, with a large fountain at the centre. The inner perimeter has additional fountains covered by trees. The square has large circular glass ventilation holes to allow gases to escape from the underground car park. The square is named after John Cabot and his son Sebastian, who were Italian explorers who settled in England in 1484.

Churchill Place is an area on the east side of Canary Wharf. It is named after Winston Churchill.

A passageway south of Cabot Square. Named after Richard Chancellor who sailed with Sir John Willoughby from Greenwich on their voyage through the White Sea to Moscow.

Canary Wharf is in London fare zone 2, and several stations can be found throughout the estate. 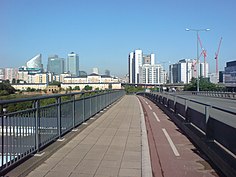 The A1020 Lower Lea Crossing, heading towards Canary Wharf. A shared use path for cycles and pedestrians also crosses the bridge.

Major roads near Canary Wharf include: 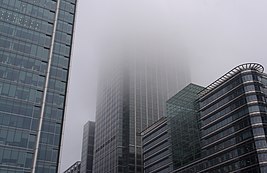 Transport for London (TfL) and the London Borough of Tower Hamlets monitor the air quality around Canary Wharf.

In 2017, an automatic monitoring station in Blackwall found that local air quality failed to meet UK National Air Quality Objectives, recording an annual average Nitrogen Dioxide (NO2) concentration of 56 μg/m3 ( micrograms per cubic metre). The National Objective is set by the government at 40 μg/m3. 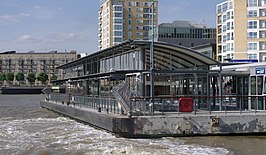 Tower, London Bridge City and Blackfriars are in the City of London. Oyster Cards are valid for travel on TfL-coordinated riverboat services. [41]

London City Airport is on the DLR. Passengers from Canary Wharf can change trains at Poplar for services to the Airport. [36]

The Canary Wharf Group, London Borough of Tower Hamlets and Transport for London (TfL) provide cycling infrastructure in and around Canary Wharf. Several leisure and commuter routes pass through or near the estate, including: 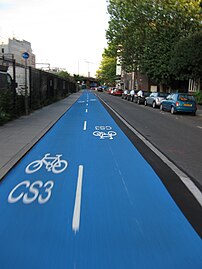 Cycle Superhighway 3 passes to the north of Canary Wharf and links the estate to the City of London, Westminster and Hyde Park on a predominantly traffic-free route.

Opened in 2003, [50] the Museum of London Docklands is one of the main attractions in the area.

Canary Wharf has been reported since 2017 as part of the Pokémon Go augmented reality game to being the home for the most wanted Pokémon gyms in London including Canary Wharf DLR station and Montgomery Square. [51]

Canary Wharf Group published an official Pokémon map for PokéStop's and Pokémon Gyms, the managing director for retail Camille Waxer said in 2016 that Pokémon Go has serious potential to attract new audiences to the area, particularly food and drink outlets are seeing an increase in footfall. [52]

Canary Wharf features in both the Doctor Who and Torchwood franchises as the fictional base of the Torchwood Institute, an organisation created by Queen Victoria to combat extraterrestrial threats. Canary Wharf features heavily as the staging post for the 2007 Cyberman invasion of Earth and is heavily damaged during a resulting battle between the Cybermen and the Daleks.

Thom Yorke of Radiohead, during their concert Live at the Astoria in May 1994, [54] explained their song Fake Plastic Trees is about Canary Wharf.