From Wikipedia, the free encyclopedia
Species of amphibian

The California red-legged frog is found in California and extreme northern Baja California, northwestern Mexico. [1] This species now occurs most commonly along the northern and southern Coast Ranges, and in isolated areas in the foothills of the Sierra Nevada mountains. [1] The current southernmost California populations are on the Santa Rosa Plateau in Riverside County, and within the Upper Las Virgenes Canyon Open Space Preserve in the Simi Hills in eastern Ventura County, near the community of West Hills. [1] [4] In 2015, egg masses from the nearby Simi Hills were introduced to two streams in the Santa Monica Mountains. Juvenile frogs were found living at the locations a year later. [5] [6]

R. draytonii is a moderate to large (4.4–14 cm (1.7–5.5 in)) frog. The back is a brown, grey, olive, or reddish color, with black flecks and dark, irregular, light-centered blotches, and is coarsely granular. A dark mask with a whitish border occurs above the upper jaw, and black and red or yellow mottling is in the groin. The lower abdomen and the undersides of its hind legs are normally red. The male can be recognized by its large fore limbs, thumbs, and webbing. The juvenile frog has more pronounced dorsal spotting, and may have yellow, instead of red, markings on the undersides of the hind legs. A characteristic feature of the red-legged frog is its dorsolateral fold, visible on both sides of the frog, extending roughly from the eye to the hip. R. draytonii looks very similar to the northern red-legged frog.

This species has disappeared from an estimated 70% of its range, and is now only found in about 256 streams or drainages in 28 counties of California. [7] However, the species is still common along the coast, and most of their population declines are in the Sierra Nevada and Southern California. The California red-legged frog is an important food source for the endangered San Francisco garter snake in San Mateo County.

Breeding occurs from November to March, or sometimes earlier toward the southern limits of its range. The male frog's advertisement call is a series of a few small grunts, usually given while swimming around under water. Choruses are weak and easily missed. This species is usually active in daylight and inhabits dense, shrubby, or emergent riparian vegetation and still or slow-moving perennial and ephemeral water bodies that also serve as breeding sites.

The tadpoles (larvae) of this species may metamorphose into frogs within about 7 months of hatching from the egg, or may overwinter, taking up to 13 months. [8] This is a recent discovery, which may have management implications for the species, particularly when aquatic habitat undergoes modification. 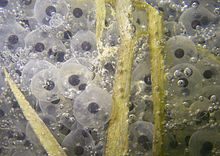 This frog is listed as threatened and is protected by federal and California law. The main cause of the population decline is habitat loss and destruction, but introduced predatory species, such as American bullfrogs, might also be a factor.

After years of litigation initiated by land developers' organizations, specifically the Home Builders Association of Northern California, and scientific back-and-forth, the US Fish and Wildlife Service announced in April 2006 the designation of about 450,000 acres (1800 km2) of critical California habitat for the threatened frog. This protected habitat did not include any land in Calaveras County, the setting of Mark Twain's short story, " The Celebrated Jumping Frog of Calaveras County", which features this species.

On September 17, 2008, the US Fish and Wildlife Service proposed to more than triple the habitat of the California red-legged frog, citing political manipulation by former Deputy Assistant Secretary Julie MacDonald at the United States Department of the Interior. According to the Los Angeles Times, "development and destruction of wetlands have eliminated the frogs from more than 70% of their historic range. MacDonald would have reduced what was left of the frog's range by 82%." [9] San Mateo County and Monterey County seem to have some of the largest healthy populations of these frogs, especially in coastal wetlands. [10] [11]

A new law designates the California red-legged frog the “state amphibian.” Presently, it is subject to protection under both federal and state laws passed in 1996. Although the designation as official state amphibian does not provide legal protection to the frog as a threatened species, it does highlight the importance that California places on the frog's preservation. [15]