The California State Guard is authorized under the provisions of the Title 32, United States Code, Section 109(c) [12] and the California State Military Reserve Act (codified in the California Military and Veterans Code). [13] It has legal standing as part of California's Active Militia. [14] Activations are mandatory at times and service members are covered under the Uniformed Services Employment and Reemployment Rights Act (USERRA) as enacted by California state law (7 MVC 394 et. seq. and 566). Employers are required to comply with these laws when service members are called to Emergency State Active Duty (ESAD). Each service member is subject to the Uniform Code of Military Justice (UCMJ) per CMVC § 560. [15]

All citizens over the age of 18 and possess a high school diploma or GED may apply for enlistment. Military veterans and those with special skills which materially contribute to the National Guard are of particular interest.

Training is administered by the Joint Training Command (JTC). The JTC conducts training year round and trains an average of 475 service members per training year.

The JTC provides training, including mission rehearsals, of individuals, units, and staffs using joint service doctrine and tactics, techniques, and procedures (TTPs) to prepare joint forces or joint staffs to respond to strategic, operational, or tactical requirements that are considered necessary to execute their assigned or anticipated missions. All JTC School Houses utilize the Train, Assess, and Counsel method when conducting training.

Any MOS, awards, medals, or badges earned in federal service transfer to the CSG. Depending on rank and time since separation, previous rank also transfers. CSG service members are held to the same regulations and training requirements for promotion as their National Guard counterparts.

All new members must attend the Basic Training Course (BOC). [18] New members without prior military experience must attend Initial Entry Training (IET), a three-month Asynchronous Learning online course where members report to a student learns the fundamentals of the CSG. They are given monthly homework and E-Learning tasks to strengthen their knowledge and train how to interact with the chain of command. Each month new materials are released and students are exposed to another element of becoming a proficient member of their Unit and the CSG. Members are required to maintain physical fitness standards, done on their own time.

While prior military members retain any Military Occupational Specialty (MOS) previously held, non-prior service members have no MOS qualification. Members with civilian qualifications that meet or exceed standards for a particular MOS are used as Subject Matter Experts (SME) to train their Army/Air Guard counterparts. An example of this is the firearms training team, which is responsible for administering weapons training throughout the California National Guard. 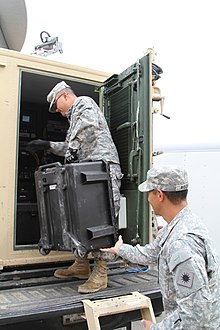 WO1 Joshua Zollo, a firefighter who serves with Alpha Company, 1st Special Troops Battalion, Regional Support Command-North, checks under the hood of a Humvee. 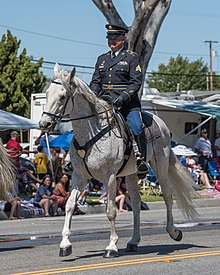 On 18 March 2017, the CSG established the Maritime Support Command (MARSCOM) under the command of CAPT M. Hanson, with SCPO E. Anderson as the MARSCOM Senior Enlisted Advisor, in a ceremony aboard the decommissioned WWII-era carrier USS Hornet. [19]

The Emergency Response Command is the CSG's rapid response force.

Team Blaze responds to wildfires throughout California. Team Blaze works with Cal Fire as a Type 2 Fire Team. These members are activated to prevent, contain, and fight wildfires.

The California State Guard established the Joint Medical Command (JMC) on 18 July 2019. The JMC has the responsibility of overseeing CSG medical personnel as they perform their mission of keeping California’s military and citizens healthy. The JMC provides military leadership to doctors, nurses, surgeons, and technicians.

Unit Training Assemblies (UTAs, also referred to as "drills") are one weekend each month. Some units require longer drills depending on their mission and aligned units.

2018: CSG service members were activated to assist with evacuations during the Camp Fire in Butte County in 2018.

2017: CSG service members were activated to assist during winter storms resulting in mudslides and flooding, and the Mendocino Complex Fire and the Carr Fire in 2017.

A large-scale operation of the CSG was during Operation Fall Blaze in October/November 2007, in which over 100 CSG service members were activated with their National Guard counterparts to help fight wildfires.

The CSG had a vital role in the 2008 Operation Lightning Strike, when Governor Arnold Schwarzenegger activated over 2,000 troops to help overwhelmed firefighters. [20]