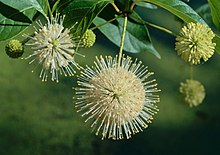 The town was originally called Buena Vista when it was founded in 1895, but the name quickly became Buttonwillow. [3]

Buttonwillow was named for the buttonbush ( Cephalanthus occidentalis). A lone buttonbush served as a landmark on an old trans-valley trail and was used by ancient Yokut Indian as a meeting place, later becoming the site of settlers' stock rodeos. The Miller-Lux holdings company eventually established a headquarters and store near the tree. [5] This tree is listed as California Historical Landmark No. 492. This landmark is now known as the Buttonwillow Tree. California Historical Landmark reads:

.NO. 492 BUTTONWILLOW TREE - This lone tree, which gave the town of Buttonwillow its name, served as a landmark on an old trans-valley trail. An ancient Yokuts Indian meeting place, it later became the site of settlers' stock rodeos. Miller and Lux established their headquarters and store here about 1885." [6]

The first United States Post Office at Buttonwillow was established in 1895. [3] 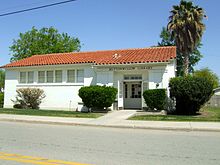 Buttonwillow is a major stop for motorists traveling on Interstate 5. It includes gas stations including ( Exxon, Shell, Chevron, and Arco), a McDonald's, a Carl's Jr., a drive-thru Starbucks, Willow Ranch BBQ restaurant, an Indian restaurant, Subway, a Mexican-Salvadoran restaurant, TravelCenters of America, Denny's, and Castro Tire & Truckwash. These are all at the exit of State Route 58.

There is a large electrical substation next to the town that is a part of a major north–south transmission corridor. It marks the northern end of Path 26 across the Transverse Ranges and the southern end of the Path 15 power lines. Buttonwillow is the motel hub for members of the Sports Car Club of America's Cal Club region when they hold events at Cal Club-owned Buttonwillow Raceway Park – a Super 8, a Motel 6 and the Homeland Inn are the motels of note there.

The town is also known for hosting the Best in the West jet rally, an annual gathering of model jet enthusiasts. [7]

According to the United States Census Bureau, Buttonwillow has an area of 6.9 square miles (18 km2), all of it land. Buttonwillow is also locally known as the cotton country, due to the abundant planting of cotton in the vicinity.

Beginning about four miles (6.4 km) south of town along Elk Hills Road, between Buttonwillow and Taft, is the enormous Elk Hills Oil Field, formerly the Naval Petroleum Reserve No. 1, which figured prominently in the Teapot Dome scandal that tarnished the administration of President Warren G. Harding. Occidental Petroleum bought the reserve from the U.S. Department of Energy in 1998, and is the current primary operator of the oil field.

Buttonwillow has a cold desert climate ( BWk) typical of the southern part of California's Central Valley with hot, dry summers and cool winters.

Tule Elk at the state reserve

Buttonwillow, California, is the host to one of California's three toxic waste dumps: the Lokern Facility. The facility, owned and operated by a company then known as Laidlaw Environmental, which subsequently became Safety-Kleen and was later purchased in 2012 by Clean Harbors, lies eight miles (13 km) west of the community. [13] It was created in the 1970s, without the notification of any of the county's residents. [14] Furthermore, Highway 58, a busy road through the community, was used as the main route for trucks from the facility to transport toxic loads. At times, as many as 200 trucks would travel through the community per day. [13]

According to a study performed by Lisa Schweitzer, “transport spills [from toxic waste transporters, such as trucks] generally cluster near origins more than destinations." In the study, Schweitzer observed the amount of toxic waste that is spilled during transportation and the area where spills are generally located. If intermodal facilities and transfer points are considered origins, Laidlaw Environmental would qualify. Furthermore, the hundreds of trucks that transport toxic loads travel in and out of the community every day. Given the results of Schweitzer's study, the residents of nearby communities (Buttonwillow, especially) are at the highest risk of experiencing side effects from the spills. Generally, spills occur as a result of human error, in which the load was packaged incorrectly or the driver experienced a vehicle accident or some other force which allowed for the leaking of toxins. [15]

It was nearly ten years before the residents of Buttonwillow became aware of the facility. Even then, residents felt as if they could do nothing to stop it. In 1988, Laidlaw Environmental proposed to build a toxic waste incinerator, which would burn up to 108,000 short tons (216,000,000 lb; 98,000,000 kg) of toxic waste each year. Then in 1992, the birth and death of a child with a physical defect— anencephaly—stirred suspicion from several residents.[ citation needed] The tragedy created a bond between these residents, and they began to look to Laidlaw Environmental and the toxins that it released as the root of the issue.

Also in 1992, Laidlaw Environmental proposed an expansion of its facility in Kern County. It wanted to double the dump's capacity, making it the largest in the United States. Furthermore, it wanted to change the types of chemicals it took from strictly petroleum waste to more than 450 different types of substances, many of which were highly toxic. [13] According to Juanita Fernandez, a resident of Buttonwillow, those in attendance at the community meeting which discussed the proposed acts appeared to be businessmen and women who were mostly of a Caucasian background. [13] The name of the committee in charge of the meeting was the Local Assessment Committee (LAC), which was formed in accordance with a law passed by California in the 1980s known as the Tanner Act. The law attempted to give county residents a say in the environmental occurrences and developments in their area. The LAC consisted of seven members, all of which met to discuss events and proposals such as those of Laidlaw Environmental. [16] Despite the apparent effort, the rules and regulations of the LAC were not fairly implemented. Even though LAC meetings were held in Buttonwillow, there were no residents from Buttonwillow on the committee. Furthermore, no members were of a Latino descent, although nearly all of Buttonwillow's residents belonged to this demographic group. While many Buttonwillow residents attempted to participate in meetings, there was no one in attendance who was willing to translate for Spanish speakers. Because the majority of Buttonwillow residents predominantly spoke Spanish, their presence at the meetings had little influence. Finally, in June 1992, a Spanish translator was provided at the meetings. One month later, the Local Assessment Committee was suspended indefinitely. [13]

In September 1994, the committee was reinstated. During the two-year span, a draft and final Environmental Impact Report (EIR) was designed for Laidlaw Environmental. [16] The EIR, required by the California Environmental Quality Act (CEQA), “examines the potential environmental impacts of many projects such as toxic waste dumps”. [13] In addition, speculation surrounded the decisions that were made in appointing new committee members. Many people believed the decisions were made based upon race rather than qualification. In fact, a white applicant was chosen over a Latino, even though this applicant had failed to submit their application. Because of the tension, the LAC decided to appoint a Latino member, Eduardo Montoya. [16]

After the application process, the LAC was told that it had ten weeks to convene and discuss the upcoming December hearing about the proposed expansion of Laidlaw Environmental. In this short amount of time, the LAC battled not with Laidlaw Environmental, but rather with the county. It appeared to many as if the county would not let the committee run their own meetings. The committee wanted control—the ability to set their own agenda and hire outside consultants. However, the county did not want to grant this authority to the LAC. Ten weeks later, in December, Laidlaw Environmental proceeded with the hearing and the Board of Supervisors disbanded the LAC. Montoya said that “the Board knew beforehand they would approve the dump” and that “they were just going through the motions”. [16]

A major divider in the struggle of Buttonwillow against Laidlaw Environmental was the issue of race. While the LAC could have spent time gathering community support and increasing awareness about the toxins, the committee members were instead battling racial discrimination and a debate with the county about Spanish translation. A local community group, known as Padres Hacia una Vida Mejor, worked for these particular rights. [17] Furthermore, the translation issue seemed to create a division among the county's residents. For example, in their efforts to institute Spanish translation of the EIR and public hearings, the Latino residents isolated themselves from the black and white people in the community. Many English-speaking residents did not support the translation and felt that speaking English was key if Latinos “wanted to live in [their] country”. [13] Because of these divisions, a racial streak emerged in the community, further dividing the community and decreasing the strength of their resistance.

The struggles of the Buttonwillow community still persist, and even as the residents make progress, they also face additional setbacks. Many of the myths that are often disproved by similar environmental justice cases apply to Buttonwillow. One of the primary myths initially believed by communities facing environmental injustice is that the government is “on our side.” According to Luke W. Cole, this myth is shared more widely among white Americans than among minorities, probably because minorities have historically faced several levels of governmental injustice. [18]