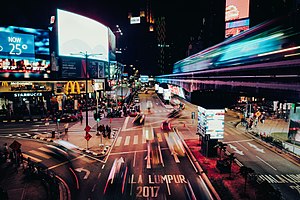 Bukit Bintang ( Malay  [ˈbu.ket̚ ˈbin.taŋ]; stylised as Bintang Walk or Starhill, the latter being a translation of the Malay name) is the shopping and entertainment district of Kuala Lumpur, Malaysia. It encompasses Jalan Bukit Bintang (Bukit Bintang Road in English) and its immediate surrounding areas. The area has long been Kuala Lumpur's most prominent retail belt that is home to many landmark shopping centres, al-fresco cafés, bars, night markets, food street, mamak stalls as well as hawker-type eateries. This area is popular among tourists and locals, especially among the youths.

In June 2021, the local municipal and authority, Kuala Lumpur City Hall (DBKL), has created a Shibuya-style pedestrian crossing at the junction of Bukit Bintang, located in front of the iconic ' Mekdi' Bukit Bintang outlet, just below the KL Monorail Line. This is done to increase the walkability in the area. 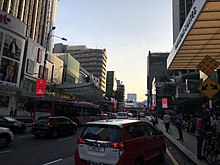 Bukit Bintang borders Pudu and Cheras to the south, Petaling Street (Chinatown) to the west, Bukit Nanas to the north, Kuala Lumpur City Centre (KLCC) to the northeast as well as Tun Razak Exchange and Maluri district to the east.

Back in the late 1980s, corporate magnate Tan Sri Yeoh Tiong Lay proposed a rejuvenated retail cluster in Kuala Lumpur. He started retail developments through a conglomerate YTL Corporation and branded the area as Bintang Walk. The district has since transformed to become one of the hippest destinations in the city. However, the decentralisation of malls in Kuala Lumpur of late has seen more sophisticated malls sprouting around the fringes of the city proper at an unprecedented rate.

Bintang Walk refers to the more developed stretch along the main Bukit Bintang Road and Sultan Ismail Road roads, with the intersection of these two roads as its axis. This place has been transformed over the last five years to become one of the city's most trendy and busiest shopping clusters.[ citation needed] Street furniture lines the pavements here. Upscale cafes, restaurants and clubs continue to make their presence felt here. On weekends, thousands of locals and tourists throng Bintang Walk and its shopping centres. Many major nightlife events take place here, such as the New Year's countdown, Merdeka eve celebrations, street concerts and parties. The annual Malaysian F1 Grand Prix pit stop and Guinness St Patrick's Day Celebrations are held here too.

The Starhill in 2021
Main article: Shopping in Kuala Lumpur

Imbi is a commercial area located near Bukit Bintang and being a popular tourist spot, the district is especially crowded during public holidays and peak hours. The Berjaya Times Square shopping complex and hotel is located in Imbi. Imbi Road is the main road running through this area.

LaLaport BBCC side view from Jalan Hang Tuah in 2022

Restaurants dedicated to Arabian gastronomy have been sprouting along with the core of the Bintang Walk of late due to a recent general initiative to lure Arab tourists to this region. Popular Maghreb and Lebanese alongside Iranian delicacies are increasingly served by restaurants. However, plenty of trendy restaurants cater to international fare, especially in the BB park area.

BB Park as of October 2021, not operating due to the pandemic

Previously an entertainment park owned by Low Yat Plaza and Sons Realty, BB Park has been extensively revamped to keep abreast with changing times. Its axis is located along the lower section of Bintang Walk, and its concept revolves around social dining and cultural themes. It hosts themed restaurants in a semi-open-air setting that serves up mainly foreign foods, including French and German cuisines. The park features live entertainment in live bands and cultural shows and are held during some weekdays alongside during weekends. Besides food joints, some of BB Park's tenants include local art galleries. [8]

Changkat Bukit Bintang is located perpendicular to Bintang Walk and Alor Street. This is the upmarket gastronomy district of Bukit Bintang. Fine dining joints line the street. It boasts pre-war, colonial buildings which have been refurbished into upmarket restaurants and pubs, serving up Western dining. Changkat Bukit Bintang is also home to one of Kuala Lumpur's hippest and happening party venues. The street is also home to brothels as well as massage parlors offering "happy endings", it is best known as one of Kuala Lumpur's red light districts. [9]

Changkat Bukit Bintang during the day

Alor Street, or Jalan Alor in Malay, is an entire street dedicated to cheap hawker food of mainly local Chinese cuisines. Located within walking proximity of Bintang Walk, it is popular among the locals for offering food served in a traditional open-air atmosphere, with chairs and tables dotting the curbs and road-sides. This is a place burgeoning with activity both during night and day. While some hawkers erect stalls along curbs, others operate food stalls from utilitarian restaurants. The food served in local hawker stalls is generally cleaner than their counterparts in Malaysia's less-developed neighbouring countries. For local and foreign Muslim, most of the stalls are non-halal which served pork, frog and beer.[ citation needed]

The Bintang Walk district is famous for its specialist foot/body massages and spas-related services. There are numerous shops along the district offering different types of massages inspired by Chinese traditions. These stores also provide exotic foot treatments. These incorporate reflexology, which stimulates acupressure points on foot. Among the claimed benefits of the foot, massages are better blood circulation, cures to specific ailments and a balanced, detoxified body. In these shops, patrons sit on reclining long chairs and spend up to an hour or more getting their feet treated to a thorough massage. Duration and types of massages measure charges. The shops are usually open till the wee hours of the morning, which is when the bulk of the business comes.

The underground  KG18A  Bukit Bintang MRT station, part of the MRT Kajang Line, opened on 17 July 2017 as part of Phase 2 of the system. Early proposals envisioned two stations- Bukit Bintang East [10] and Bukit Bintang West (alternately Bukit Bintang 1 and Bukit Bintang 2) which were later combined into one, and made into a connecting station (without paid zone integration) with the eponymous Monorail station. The MRT station features five exits, serving the nearby shopping malls.

In 2011, Petronas spent RM100 million under its social contribution programme to build an elevated, air-conditioned walkway from Suria KLCC shopping centre to Pavilion shopping centre in Bukit Bintang. The walkway includes a 562m long and five-metre wide elevated walkway [11] that traverses through the busy areas of Pinang Road, Perak Road and Raja Chulan Road with escalator and staircase entry and exit points at strategic and convenient locations as well as security guards for the safety of the pedestrians. The walkway is also linked to the Raja Chulan Monorail station, Impiana Hotel and Kuala Lumpur Convention Centre. An average walk from Suria KLCC to Pavilion through the elevated walkway would take approximately 15 minutes.