From Wikipedia, the free encyclopedia
1994 single by Weezer

"Buddy Holly" is a song by American rock band Weezer. The song was written by Rivers Cuomo and released as the second single from the band's debut album, Weezer (The Blue Album) on September 7, 1994, which would have been Buddy Holly's 58th birthday. The lyrics reference the song's 1950s namesake and actress Mary Tyler Moore. It reached number two and number 34 on the US Modern Rock Tracks chart and the US Mainstream Rock Tracks chart, respectively. The song also reached number six in Canada, number 12 in the United Kingdom, number 13 in Iceland and number 14 in Sweden.

Songwriter Rivers Cuomo wrote "Buddy Holly" after his friends made fun of his Asian girlfriend. [9] He originally planned to exclude it from the album; he felt it was "cheesy" and perhaps did not represent the sound he was pursuing for Weezer. Producer Ric Ocasek persuaded him to include it. In the book River's Edge, Ocasek is quoted saying: "I remember at one point he was hesitant to do 'Buddy Holly' and I was like, 'Rivers, we can talk about it. Do it anyway, and if you don't like it when it's done, we won't use it. But I think you should try. You did write it and it is a great song.'" Bassist Matt Sharp recalled: "Ric said we'd be stupid to leave it off the album. We'd come into the studio in the morning and find little pieces of paper with doodles on them: WE WANT BUDDY HOLLY." [10]

An early demo of "Buddy Holly" recorded by Cuomo in 1993 has a different feel, as the song is played at a much slower tempo than the version that appears on the album. This version appeared on Alone: The Home Recordings of Rivers Cuomo. The liner notes for Alone explain that the chorus, in its most primitive form, originally was sung as: "Oo-wee-oo you look just like Ginger Rogers / Oh, oh, I move just like Fred Astaire". The rest of the chorus stayed the same as the Blue Album version.

The song was released on what would have been its namesake's (left) 58th birthday. The song also references American actress Mary Tyler Moore (right).

Steve Baltin from Cash Box commented, "You’ve gotta love a song that makes reference to Mary Tyler Moore. Slightly poppier in its guitar sound than their first single, (...), this Ric Ocasek-produced song could help expand their already-growing fan base. Besides that, it mentions Mary, the woman who could turn the world on with her smile. Therefore, it has to be a hit." [11] Pan-European magazine Music & Media wrote, "Made loud to play loud and sing along, it's the ideal power pop to cruise round this summer. That silly twin synth/guitar, betrays producer Ocasek, the one-time driver of New York's Cars." [12] A reviewer from Music Week gave the song four out of five, adding, "A short and sweet taster from the album which may not have the same quirky appeal of Undone (The Sweater Song), but has an attractive hook and a video to arouse interest." [13] 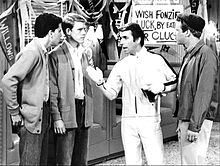 The music video takes place at Arnold's Drive-in on Happy Days (pictured in a 1975 episode).

According to Matt Sharp, Spike Jonze came up with three ideas for the music video for "Buddy Holly". Sharp stated that two of the ideas "weren't great". When Jonze pitched the idea that came to be the song's video, Sharp told Jonze "I don't think you'll be able to pull it off", but the band agreed to do it. [14] The video was filmed at Charlie Chaplin Studios in Hollywood over a single day and portrays Weezer performing at Arnold's Drive-In from the 1970s television show Happy Days, combining footage of the band with clips from the show. Happy Days cast member Al Molinaro made a cameo; he introduces the band by saying, " Kenosha, Wisconsin's own Weezer"; in fact it's Molinaro himself who was from Kenosha, while Weezer is from Los Angeles. [15] 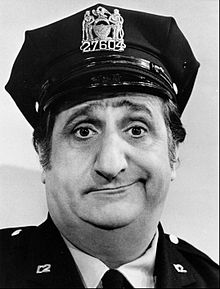 Happy Days cast member Al Molinaro reprises his role as Al Delvecchio in the video. Other cast members make cameos throughout the video.

In the climax, the video's stylist Casey Storm body doubled, and this allowed Fonzie to dance to the band's performance. The video also features brief cameos by some members of the band as dancers at Arnold's. Anson Williams, who played Potsie on Happy Days, objected to footage of him appearing in the video, but relented after receiving a letter from David Geffen, founder of Geffen Records. [10] According to drummer Pat Wilson, the video was achieved without computer graphics, only "clever" camerawork and editing. [16] Sharp stated that the video was "pretty fucking wacky". [14]

The video was met with great popularity, and heavy rotation on MTV. [17] At the 1995 MTV Video Music Awards, it won Best Alternative Video, Breakthrough Video, Best Direction and Best Editing, and was nominated for Video of the Year. [18]

The "Buddy Holly" video was included on the Windows 95 CD-ROM, resulting in a skyrocket in popularity and earning Weezer a place in the history of MTV Music Video Awards. [19] [20] Geffen did not tell Weezer they had negotiated with Microsoft to include the video; the band members, none of whom owned computers, were oblivious to the implications. [16] According to Wilson, "I was furious because at the time I was like, 'How are they allowed to do this without permission?' Turns out it was one of the greatest things that could have happened to us. Can you imagine that happening today? It's like, there's one video on YouTube, and it's your video." [16] [21]

The video also appears in the music exhibit in the Museum of Modern Art. The music video was featured in Season 5, Episode 30 of MTV's Beavis and Butthead entitled "Here Comes the Bride's Butt" on June 9, 1995.

In 2016, the song was covered by Canadian nerd rock trio Double Experience with an accompanying video [44]

In 2017, the song was chosen by Finn Wolfhard on the show Lip Sync Battle during the Stranger Things episode. [45]

In 2022, the song went viral on TikTok, with several memes popping from the song, most famously the riff that's played before the final chorus. Videos of this meme has racked up several million views.