In 1852, several prominent citizens established the "Brooklyn Athenaeum and Reading Room" for the instruction of young men. It was as was the practice in those times, a private, subscription library for members, who were recruited and encouraged by the up-rising mercantile and business class of young men, to continue by constant reading whatever formal education they had received through a university, college, high school/private academy, or trade school. Its collections focused on the liberal arts and the humanities such as biography, economics, history, literature, philosophy, and other applications later labeled social studies.

Five years later, in 1857, another group of young men, along with businessmen, manufacturers, and merchants, founded the "Brooklyn Mercantile Library Association of the City of Brooklyn", with holdings more pronounced in the business, commercial, economics, mathematical, scientific, and technical fields. The Librarian-in-Charge was Stephen Buttrick Noyes, who later went to the Library of Congress in 1866 but returned to Brooklyn three years later, in 1869. This collection and the previous one were merged in 1869 and later moved to a headquarters building on Montague Street. In 1878, the Library Associations were renamed the "Brooklyn Public Library". Stephen Buttrick Noyes commenced developing an extensive catalog for the collections which he completed in 1888.

The first free public library in Brooklyn was that of Pratt Institute, a collegiate institute founded by Charles Pratt in 1888. Available not only for its own students and faculty, the library was also open to the general public at that early time. 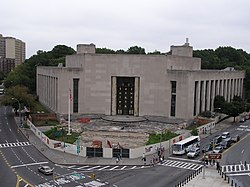 The Central Library at Grand Army Plaza in October 2005, during construction of a new entrance plaza and underground auditorium.

There are 60 neighborhood branches throughout the borough, of which many are Carnegie libraries. The library has four bookmobiles, including the Kidsmobile, which carries children's materials, and the Bibliobús, which carries a Spanish language collection. [8]

The Bookmobile is a 32-foot (9.8 m)-long, 11.5-foot (3.5 m)-high vehicle housing a mobile library. Carrying up to 6,000 books, the Bookmobile serves communities whose local branches are closed for renovation. The Bookmobile offers many of the services available at other branches.

The Kidsmobile is a smaller, more colorful version of the Bookmobile. During the school year, the Kidsmobile visits schools, day care centers, Head Start, after-school programs and community events. In the summer, the Kidsmobile also travels to parks and camps. In addition to books, the Kidsmobile offers storytelling and arts and crafts.

The Bibliobús is a mobile Spanish-language library. It brings books and other media to Spanish-speaking communities in Brooklyn. The Bibliobús serves sites such as schools, daycares, community-based organizations, senior centers, nonprofit organizations, and community events. [10]

The Shelby White and Leon Levy Information Commons opened at Central Library on January 15, 2013. It features an open workspace with 25 computers and seating and outlets for more than 70 laptop users; 7 meeting rooms, including one that doubles as a recording studio; and a 36-seat training lab. [11]

The Brooklyn Public Library has a Free Speech Zone. This was created in response to the attempt to ban several 20th century texts. The increase in attempts at restricting free speech has prompted this installment at the library. The display includes two sets of illuminated triptychs and backlit portraits of individuals from the library's community who are affected by the censorship. The display also includes passages from the challenged books, including Ulysses, Naked Lunch, The Well of Loneliness, Lysistrata and Tropic of Cancer. Recently challenged books, including Harry Potter and the Sorcerer's Stone, The Color Purple, Native Son and Heather Has Two Mommies are featured as well.

Brooklyn Public Library's governing board is the board of trustees, consisting of 38 members, all serving in non-salaried positions. The Mayor and the Brooklyn Borough President each appoint eleven of the trustees. These appointed trustees elect twelve additional board members to serve. [14] The mayor, New York City Comptroller, Speaker of the City Council and Brooklyn Borough President are ex officio members of the board. All non-ex officio members of the board serve three-year terms. [15]

Linda E. Johnson was named president and CEO on August 16, 2011, after having served as the institution's interim executive director since July 1, 2010. She replaced Dionne Mack-Harvin, who served as executive director from March 2007. Mack-Harvin was the first African American woman to lead a major public library system in New York state. [16] [17] Previously, Ginnie Cooper had been the executive director of the BPL since January 2003. Other notable executive directors include Kenneth Duchac, who ran the system from 1970 until his retirement in 1986. Duchac is the father of John Doe, founder and lead singer of seminal 1980s punk band X.

The president of the Brooklyn Public Library, Linda E. Johnson, was quoted as saying: “Access to information is the great promise upon which public libraries were founded. We cannot sit idly by while books rejected by a few are removed from the library shelves for all. Books UnBanned will act as an antidote to censorship, offering teens and young adults across the country unlimited access to our extensive collection of ebooks and audiobooks, including those which may be banned in their home libraries." [26]