Douglas, on the South Side of Chicago, Illinois, is one of Chicago's 77 community areas. The neighborhood is named for Stephen A. Douglas, Illinois politician and Abraham Lincoln's political foe, whose estate included a tract of land given to the federal government. [3] This tract later was developed for use as the Civil War Union training and prison camp, Camp Douglas, located in what is now the eastern portion of the Douglas neighborhood. Douglas gave that part of his estate at Cottage Grove and 35th to the Old University of Chicago. [4] The Chicago 2016 Olympic bid planned for the Olympic Village to be constructed on a 37-acre (15 ha) truck parking lot, south of McCormick Place, that is mostly in the Douglas community area and partly in the Near South Side. [5]

The Douglas community area stretches from 26th Street, south to Pershing Road along the Lake Shore, including parts of the Green Line, along State Street and the Metra Electric and Amtrak passenger railroad tracks, which run parallel to Lake Shore Drive. Burnham Park runs along its shoreline, containing 31st Street Beach. The community area also contains part of the neighborhood of Bronzeville, the historic center of black culture in the city, since the early 20th century and the Great Migration.

Bronzeville is the area comprising the Douglas, Grand Boulevard, and Oakland communities on the South Side of Chicago, around the Illinois Institute of Technology, VanderCook College of Music, and Illinois College of Optometry. It is accessible via the Green and Red lines of the Chicago Transit Authority, as well as the Metra Electric District Main Line. In 2011, a new Metra station, Jones/Bronzeville Station, opened to serve the neighborhood on the Rock Island and planned SouthEast Service.

Victory Monument and the Ida B. Wells-Barnett House

In the early 20th century, Bronzeville was known as the "Black Metropolis", one of the nation's most significant concentrations of African-American businesses, and culture. The groundbreaking Pekin Theatre rose near 27th street in the first decade of the 20th century. Between 1910 and 1920, during an early peak of the " Great Migration", the population of the area increased dramatically when thousands of black Americans escaped the oppression of the South and migrated to Chicago in search of industrial jobs. The Wabash YMCA is considered the first black Y in the U.S. [7] It remains active today due to ongoing support from nearby black churches. [8] The Wabash YMCA's work to commemorate black culture was the genesis of Black History Month. [9]

In 1922, Louis B. Anderson, a Chicago alderman, had the architects Michaelsen & Rognstad build him a house at 3800 South Calumet Avenue. The surrounding area would take on the name of this house (which he had named Bronzeville). [10]

Key figures in the area include: Andrew "Rube" Foster, founder of the Negro National Baseball League; Ida B. Wells, a civil rights activist, journalist and co-organizer of the NAACP; Margaret Taylor-Burroughs, artist, author, and one of the co-founders of the DuSable Museum of African American History; Bessie Coleman, the first black woman pilot; Gwendolyn Brooks, poet laureate and first black American awarded the Pulitzer Prize, as well as, other acclaimed authors and artists of the Chicago Black Renaissance; actresses Marla Gibbs and Jennifer Beals; acclaimed R&B singers Minnie Riperton, Sam Cooke and Lou Rawls; and cornet player and jazz bandleader King Oliver. His protégé, jazz musician, trumpeter and bandleader Louis Armstrong from New Orleans and his wife Lil Hardin Armstrong, who was a pianist, composer and bandleader, lived in Bronzeville on E. 44th Street and performed at many of the area's night clubs, including the Sunset Cafe and Dreamland Cafe. The neighborhood includes the Chicago Landmark Black Metropolis-Bronzeville District. [11]

47th Street was and remains the hub of the Bronzeville neighborhood. In the early 21st century, it has started to regain some of its former glory. Gone for good is the Regal Theater (demolished in 1973), where many great performers took the stage. The Forum Hall building was built in 1897 designed by Chicago archict Samuel Atwater Treat (1839-1910) and may contain the oldest hardwood ballroom dance floor in Chicago. It filled a significant role in Bronzeville's cultural scene, being the venue for famous musicians From the 1940s and 1960s, high-rise public housing projects were constructed in the area, which were managed by the Chicago Housing Authority. The largest complex was the Robert Taylor Homes. They developed severe social problems exacerbated by concentrated poverty among the residents and poor design of the buildings. This project was demolished in the late 1990s and early 21st century. The nickname "Bronzeville" was first used for the area in 1930 by James J. Gentry, a local theater editor for the Chicago Bee publication. It refers to the brown skin color of black Americans, who predominated as residents in that area. It has become common usage over decades. [12]

Bronzeville and its black community have a central role in the plot of Sara Paretsky's 2003 detective mystery novel Blacklist, part of the V. I. Warshawski series.

Originally a five-building, 1677-unit public housing project erected in 1962 by Michael Reese Hospital, Prairie Shores has been adapted as a market rate, middle-class community. Along with the adjacent Lake Meadows development, this was part of the city's largest urban renewal project at the time of its inception in 1946. The total project included construction of the Illinois Institute of Technology and Mercy Hospital. The development was funded under the Title I of the Housing Act of 1949, using US$6.2 million ($55.5 million today) of subsidies. [14]

Of all the sections of Douglas originally developed by Stephen A. Douglas, only Groveland Park survives. Its homes are built around an oval-shaped park. Groveland Park is located between Cottage Grove Avenue, 33rd Street, 35th Street and the Metra Electric railroad tracks.

The Metra Electric District has a stop at East 27th Street. [17]

Several buildings on the Illinois Institute of Technology main campus, such as Machinery Hall pictured here, have been designated as Chicago Landmarks and placed on the National Register of Historic Places. 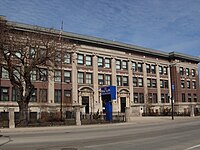 Young Women's Leadership Charter School, a charter school, is in the community area. [19]

Bronzeville is also home to the renowned Illinois Institute of Technology, which is famous for its engineering and architecture programs. It is home to the VanderCook College of Music and the Illinois College of Optometry. In 2006 the liberal arts school Shimer College, based on the Great Books, moved into the neighborhood.

Wikivoyage has a travel guide for Chicago/Bronzeville.
Retrieved from " https://en.wikipedia.org/?title=Douglas,_Chicago&oldid=1111029411#Bronzeville"
Categories:
Hidden categories: