After a group of soldiers took control and partially closed off the bridge during the military coup d'état attempt on 15 July 2016, Prime Minister Binali Yıldırım proclaimed on 25 July 2016 the decision of the Cabinet of Turkey that the bridge will be formally renamed as the 15 Temmuz Şehitler Köprüsü (July 15th Martyrs Bridge) in memory of those killed while resisting the attempted coup. [5] [6] [7]

The Bosphorus Bridge is famous for its important transport routes, connecting parts of Europe to Turkey.

The idea of a bridge crossing the Bosphorus dates back to antiquity. The Greek writer Herodotus says in his Histories that, on the orders of Emperor Darius the Great of the Achaemenid Empire (522 BC–485 BC), Mandrocles of Samos once engineered a pontoon bridge across the Bosphorus, linking Asia to Europe; this bridge enabled Darius to pursue the fleeing Scythians as well as position his army in the Balkans to overwhelm Macedon. [8] Leonardo da Vinci proposed a suspension bridge to Sultan Bayezid II in 1502 or 1503. [9] The first modern project for a permanent bridge across the Bosphorus was proposed to Sultan Abdul Hamid II of the Ottoman Empire by the Bosphorus Railroad Company in 1900, which included a rail link between the continents. [10]

Since April 2007, a computerised LED lighting system illuminates the bridge at night.

The decision to build a bridge across the Bosphorus was taken in 1957 by Prime Minister Adnan Menderes. For the structural engineering work, a contract was signed with the British firm Freeman Fox & Partners in 1968. The bridge was designed by the British civil engineers Gilbert Roberts, William Brown and Michael Parsons, who also designed the Humber Bridge, Severn Bridge, and Forth Road Bridge. Construction started in February 1970 and ceremonies were attended by President Cevdet Sunay and Prime Minister Süleyman Demirel. The bridge was built by the Turkish firm Enka Construction & Industry Co. along with the co-contractors Cleveland Bridge & Engineering Company (England) and Hochtief AG (Germany). [11]

The bridge was completed on 30 October 1973, one day after the 50th anniversary of the founding of the Republic of Turkey, and opened by President Fahri Korutürk and Prime Minister Naim Talu. The cost of the bridge was US$200 million ($1.22 billion in 2021 dollars [12]).

Upon the bridge's opening, much was made of its being the first bridge between Europe and Asia since the pontoon bridge of Xerxes in 480 BC. That bridge, however, spanned the Hellespont ( Dardanelles), some distance away from the Bosphorus, and was the second bridge after the above-mentioned bridge built by Emperor Darius I The Great across the Bosphorus in 513 BC.

The bridge highway is eight lanes wide. Three standard lanes, one emergency lane and one pedestrian lane serve each direction. [1] On weekday mornings, most commuter traffic flows westbound to Europe, so four of the six lanes run westbound and only two eastbound. Conversely, on weekday evenings, four lanes are dedicated to eastbound traffic and two lanes, to westbound traffic.

For the first three years, pedestrians could walk over the bridge, reaching it with elevators inside the towers on both sides. No pedestrians or commercial vehicles, such as trucks, are allowed to use the bridge today.

Today, around 180,000 vehicles pass daily in both directions, with almost 85% being cars. On 29 December 1997, the one-billionth vehicle passed the bridge. Fully loaded, the bridge sags about 90 cm (35 in) in the middle of the span.

It is a toll bridge, and a toll plaza with 13 toll booths is situated near the bridge on the Asian side. A toll is charged for passing from Europe to Asia, but not for passing in the reverse direction.

Since 1999, some of the toll booths (#9 - #13), located to the far left as motorists approach them, are unmanned and equipped only with a remote payment system (Turkish: OGS) in order to not delay traffic. In addition to OGS, another toll pay system with special contactless smart cards (Turkish: KGS) was installed at specific toll booths in 2005. 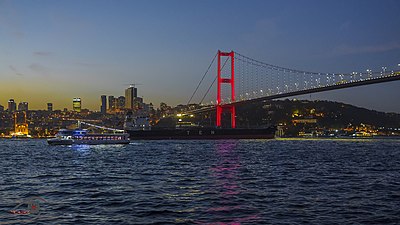 The Bosphorus Bridge at night

Since 3 April 2006, toll booths accept no cash but only OGS or KGS. An OGS device or KGS card can be obtained at various stations before reaching the toll plazas of highways and bridges. In 2006, the toll was 3.00 TL or about $2.00.

Since April 2007, a computerised LED lighting system of changing colours and patterns, developed by Philips, illuminates the bridge at night.

In 2012, KGS was replaced with the new HGS system, which uses radio-frequency identification (RFID) technology. [13]

Tolls need to be increased almost every year to keep up with high producers’ price inflation. [15]

Daytime view of the bridge

Every October, the annual Intercontinental Istanbul Eurasia Marathon crosses the bridge on its way from Asia to Europe. During the marathon, the bridge is closed to vehicular traffic.

In October, visitors participate in the 'fun run' and cross the bridge on foot. Many take picnics to enjoy the view.

On 15 May 2005 at 07:00 local time, U.S. tennis star Venus Williams played a show game with Turkish player İpek Şenoğlu on the bridge, the first tennis match played on two continents. [17] [18] The event promoted the upcoming 2005 WTA İstanbul Cup and lasted five minutes. [17] After the exhibition, they both threw a tennis ball into the Bosphorus. [17] [18] 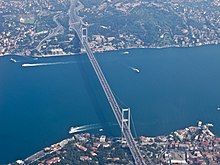 Aerial view of the bridge

On 17 July 2005 at 10:30 local time, British Formula One driver David Coulthard drove his Red Bull racing car across the bridge from the European side to the Asian side, then, after turning with a powerslide at the toll plaza, back to the European side for show. [19] [20] He parked his car in the garden of Dolmabahçe Palace where his ride had started. [19] [21] While crossing the bridge with his Formula 1 car, Coulthard was picked up by the automatic surveillance system and charged with a fine of 20 Euros because he passed through the toll booths without payment. [20] His team agreed to pay for him. [20]

On 5 November 2013, World No. 1 golfer Tiger Woods, visiting for the 2013 Turkish Airlines Open golf tournament held between 7 and 10 November, was brought to the bridge by helicopter and made a couple of show shots on the bridge, hitting balls from the Asian side to the European side on one side of the bridge, which was closed to traffic for about one hour. [22] [23]

On 15 July 2016, the bridge was blocked by a faction of the Turkish Armed Forces during a coup attempt. [24] They also arrested civilians and police officers. Some tanks ran over vehicles. [25] The soldiers involved surrendered to police and to civilians the next day. [24]