From Wikipedia, the free encyclopedia
Species of beetle
For other uses, see Boll weevil (disambiguation).
Not to be confused with Poll evil.

The boll weevil (Anthonomus grandis) is a beetle that feeds on cotton buds and flowers. Thought to be native to Central Mexico, [1] it migrated into the United States from Mexico in the late 19th century and had infested all U.S. cotton-growing areas by the 1920s, devastating the industry and the people working in the American South. During the late 20th century, it became a serious pest in South America as well. Since 1978, the Boll Weevil Eradication Program in the U.S. allowed full-scale cultivation to resume in many regions.

The adult insect has a long snout, a grayish color, and is usually less than 6 mm (0.24 in) in length. 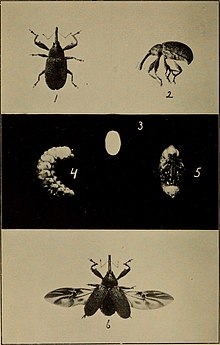 Adult weevils overwinter in well-drained areas in or near cotton fields, and farms after diapause. They emerge and enter cotton fields from early spring through midsummer, with peak emergence in late spring, and feed on immature cotton bolls.

The boll weevil lays its eggs inside buds and ripening bolls (fruits) of the cotton plants. The female can lay up to 200 eggs over a 10- to 12-day period. The oviposition leaves wounds on the exterior of the flower bud. The eggs hatch in 3 to 5 days within the cotton squares (larger buds before flowering), feed for 8 to 10 days, and finally pupate. The pupal stage lasts another 5 to 7 days. The lifecycle from egg to adult spans about three weeks during the summer. Under optimal conditions, 8 to 10 generations per season may occur.

Boll weevils begin to die at temperatures at or below −5 °C (23 °F). Research at the University of Missouri indicates they cannot survive more than an hour at −15 °C (5 °F). The insulation offered by leaf litter, crop residues, and snow may enable the beetle to survive when air temperatures drop to these levels.

Other limitations on boll weevil populations include extreme heat and drought. Its natural predators include fire ants, insects, spiders, birds, and a parasitic wasp, Catolaccus grandis. The insects sometimes emerge from diapause before cotton buds are available. 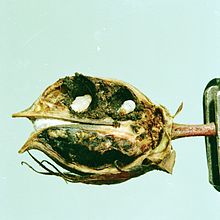 The insect crossed the Rio Grande near Brownsville, Texas, to enter the United States from Mexico in 1892 [2] and reached southeastern Alabama in 1909. By the mid-1920s, it had entered all cotton-growing regions in the U.S., traveling 40 to 160 miles per year. It remains the most destructive cotton pest in North America. Since the boll weevil entered the United States, it has cost U.S. cotton producers about $13 billion, and in recent times about $300 million per year. [2]

The boll weevil contributed to Southern farmers' economic woes during the 1920s, a situation exacerbated by the Great Depression in the 1930s.

The boll weevil appeared in Venezuela in 1949 and Colombia in 1950. [3] The Amazon Rainforest was thought to present a barrier to the insect's further spread, until it was detected in Brazil in 1983. An estimated 90% of the cotton farms in Brazil are now infested. During the 1990s, the weevil spread to Paraguay and Argentina. The International Cotton Advisory Committee has proposed a control program similar to that used in the U.S. [3]

During early years of the weevil's presence, growers sought relatively warm soils and early-ripening cultivars. Following World War II, the development of new pesticides such as DDT enabled U.S. farmers again to grow cotton as an economic crop. DDT was initially extremely effective, but U.S. weevil populations developed resistance by the mid-1950s. [4] Methyl parathion, malathion, and pyrethroids were subsequently used, but environmental and resistance concerns arose as they had with DDT, and control strategies changed. [4]

While many control methods have been investigated since the boll weevil entered the United States, insecticides have always remained the main control methods. In the 1980s, entomologists at Texas A&M University pointed to the spread of another invasive pest, the red imported fire ant, as a factor in the weevils' population decline in some areas. [5]

Other avenues of control that have been explored include weevil-resistant strains of cotton, [6] the parasitic wasp Catolaccus grandis, [7] the fungus Beauveria bassiana, [8] and the Chilo iridescent virus. Genetically engineered Bt cotton is not protected from the boll weevil. [9]

Although it was possible to control the boll weevil, the necessary insecticide was costly. The goal of many cotton entomologists was to eventually eradicate the pest from U.S. cotton. In 1978, a large-scale test was begun in eastern North Carolina and in Southampton County, Virginia, to determine the feasibility of eradication. Based on the success of this test, area-wide programs were begun in the 1980s to eradicate the insect from whole regions. These are based on cooperative effort by all growers together with the assistance of the Animal and Plant Health Inspection Service of the United States Department of Agriculture (USDA).[ citation needed]

The program has been successful in eradicating boll weevils from all cotton-growing states with the exception of Texas, and most of this state is free of boll weevils. Problems along the southern border with Mexico have delayed eradication in the extreme southern portions of this state. Follow-up programs are in place in all cotton-growing states to prevent the reintroduction of the pest. These monitoring programs rely on pheromone-baited traps for detection.[ citation needed] The boll weevil eradication program, although slow and costly, has paid off for cotton growers in reduced pesticide costs. This program and the screwworm program of the 1950s are among the biggest and most successful insect control programs in history. [10]

The Library of Congress American Memory Project contains a number of oral history materials on the boll weevil's impact. [11]

A 2009 study found "that as the weevil traversed the American South [in the period 1892-1932], it seriously disrupted local economies, significantly reduced the value of land (at this time still the most important asset in the American South), and triggered substantial intraregional population movements." [12] A 2020 Journal of Economic History study found that the boll weevil spread between 1892 and 1922 had a beneficial impact on educational outcomes, as children were less likely to work on cultivating cotton. [13] A 2020 NBER paper found that the boll weevil spread contributed to fewer lynchings, less Confederate monument construction, less KKK activity, and higher non-white voter registration. [14]

The boll weevil infestation has been credited with bringing about economic diversification in the Southern US, including the expansion of peanut cropping. The citizens of Enterprise, Alabama, erected the Boll Weevil Monument in 1919, perceiving that their economy had been overly dependent on cotton, and that mixed farming [15] and manufacturing were better alternatives.