Boeing South Carolina (previously Boeing Charleston) is an assembly site for Boeing's Commercial Airplanes division, located in North Charleston, South Carolina. The site is the major manufacturing, assembly and delivery site for Boeing commercial aircraft in the eastern United States and is one of the largest employment centers in the state. The site currently serves as one of two final assembly and delivery points for the Boeing 787 Dreamliner. The site has seen rapid investment and growth since Boeing made a number of purchases in 2008 and 2009 from its former suppliers Vought and Global Aeronautica who had factories there. The Boeing South Carolina Delivery Center, a 1.2 million square feet facility, opened on November 12, 2011, and delivers South Carolina-built 787s to customers from around the world. As of September 28, 2017 the site employs 6,943 workers and contractors. [1]

The 265-acre (107-hectare) site is located on the southern portions of the joint-use Charleston Air Force Base and Charleston International Airport. Ground was broken on the site in October 2009 with limited operations commencing in July 2011. [2] In 2013, Boeing South Carolina was chosen for the design and manufacturing of the Boeing 737 MAX inlet components located in the City of North Charleston, South Carolina. [3] The site was also chosen to host an Information Technology Center of Excellence and Engineering Design Center in 2013.

The final assembly building is 1.2 million square feet and produces the 787 Dreamliner. This building contains eight positions for aircraft assembly and multiple floors of offices, conference rooms, and equipment storage. 18,000 tons of structural steel was used during the assembly and the building is 1,041 feet long by 618 feet wide. [4] The building also hosts 10 acres of solar panels on the roof that can generate up to 2.6 megawatts of electricity that is able to power the plant and giant autoclaves. The paint facility broke ground in 2014 and contains two paint bays that allows the 787 to be painted in South Carolina. This building is 360,000 square feet and can house planes with a 200-foot wing span. Previously the planes would fly elsewhere to be painted, costing the company money and materials. [5] Other notable buildings on the campus are the aft and midbody assembly buildings, and the Dreamlifter operations building. Other buildings in the area but not located on the campus are the Interior Responsibility Center, the Boeing Research & Technology Center, and the Propulsion Center located near Ladson, South Carolina.

The new factory has provided a boost to the local economy in the wake of record-high unemployment rates during the Great Recession, especially in the manufacturing industry. North Charleston mayor Keith Summey called the new factory the "reversal of the shipyard closing," alluding to the 1996 closure of the Charleston Naval Base and Shipyard that took a heavy toll on the local economy. [6] Boeing was offered an incentives package reportedly worth $450 million provided the company create 3,800 jobs and invest $750 million over the next seven years. [6]

Later calculations determined that the state-offered incentives package will be worth in excess of $900 million in property and sales tax breaks and state bonds. State lawmakers stood by the deal, insisting that the economic advantages of the package would justify a sizable investment by the State. [7]

In 2011, the National Labor Relations Board filed a federal complaint against Boeing stating that the company broke the law retaliating against Boeing workers in Washington for exercising the right to strike. South Carolina's low unionisation rates, the lowest in the country at 2.7%, were stated by Boeing management as a reason to transfer production to there. [8]

Since then, Boeing has continued to challenge the rights of unions to organise at the plant, [9] [10] and is alleged to have fired workers for their attempts to unionise. [11] 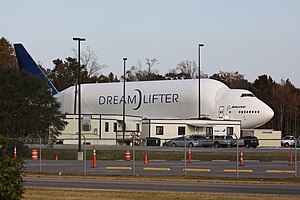 The aft fuselage sections 47 and 48, for the 787, are fabricated at the North Charleston site. Sections 44 and 46 are manufactured by Leonardo S.p.A. in Grottaglie, Italy. Section 43 is fabricated by Kawasaki Heavy Industries in Nagoya, Japan. Section 45/11 is fabricated by Subaru Corporation in Nagoya, Japan. Two 747 Dreamlifter Cargo planes are stationed at Boeing South Carolina for transporting components of the 787.

All variants of the 787, which consists of the 787-8, the 787-9 and the 787-10, are assembled there; Boeing South Carolina is the exclusive assembly and delivery site of the -10 variant, as the fuselage pieces of the -10 are too large to fit inside a Dreamlifter for transport to Everett.

The Charleston factory has been criticized by media outlets for ignoring safety defects in its airplanes in favor of meeting deadlines. Following the discovery of exterior damage on planes manufactured in Charleston, Qatar Airways has elected to exclusively accept delivery of Dreamliners built in Everett, but has since taken delivery of South Carolinian assembled aircraft. [12] [13]