From Wikipedia, the free encyclopedia
Person who has at least one billion of a currency
For other uses, see Billionaire (disambiguation).

A billionaire is a person with a net worth of at least one billion (1,000,000,000, i.e., a thousand million) units of a given currency, usually of a major currency such as the United States dollar, euro, or pound sterling. The American business magazine Forbes produces a global list of known U.S. dollar billionaires every year and updates an Internet version of this list in real-time. [1] The American oil magnate John D. Rockefeller became the world's first confirmed U.S. dollar billionaire in 1916. [2] 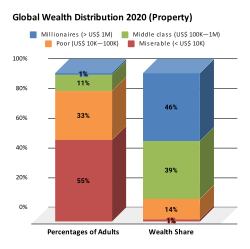 According to the UBS/PwC Billionaires Report 2019 report released in November 2019, there are currently 2,101 U.S. dollar billionaires worldwide, from 66 countries, with a combined net worth of $8.5 trillion. [9] [10] Also according to the report, billionaires have a substantial positive impact on the sustainability and success of companies controlled by them. Billionaire-controlled companies listed on the equity market returned 17.8 percent, compared with the 9.1 percent of the MSCI AC World Index. According to the authors of the report, this Billionaire Effect is connected with smart risk-taking and willingness to plan and invest for the long term.

Different authorities use different methodologies to determine net worth and to rank them, and not all information about personal finances is publicly available. In 2019, Forbes counted a record 607 billionaires in the U.S.. [15] Over the course of the 2020s, depending on the source and the year, the world's richest person has been reckoned to be Jeff Bezos, Bernard Arnault and family, or Elon Musk. 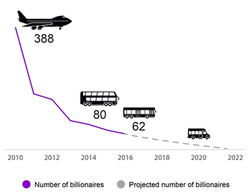 The number of billionaires that, with assets combined, would own as much money as half the world population, and what transport they would fit on, between years 2010 to 2016 [18]

According to a 2016 Oxfam report, the wealth of the poorest 95% dropped by 38% between 2010 and 2015, due to an increase in the global population of 400 million. [18] In the same period, the wealth of the richest 62 people between the World's Billionaires increased by $500bn (£350bn) to $1.76tn. More recently, in 2017 an Oxfam report noted that just eight billionaires have as much net worth as "half the human race". [6] [7] However, the Oxfam report has been criticized for considering debt as negative wealth, which leads to wealthy people with large amounts of debt to be considered poor or not wealthy. [19]

In 2019, 19 people became billionaires. Four of the members joined as a result of death or divorce, including Julia Koch and Jeff Bezos's former wife Mackenzie Scott. [20]

These aggregated statistics for billionaires include the total number of known billionaires and the net worth of the world's wealthiest individual for each year since 2008. Data for each year is from the annual Forbes list of billionaires, with currency figures given in U.S. dollars. Data since 2018 also includes the Wealth-X billionaire census which typically finds higher numbers than Forbes.