Lester Ben Binion (November 20, 1904 – December 5, 1989) was an American gambling icon, career criminal, and convicted murderer who established illegal gambling operations in the Dallas- Fort Worth, Texas area. He would later relocate to Nevada, where gambling was legal, and open the successful Binion's Horseshoe casino in downtown Las Vegas.

Binion was born and raised in Pilot Grove, Texas in Grayson County, north of Dallas. His parents initially kept him out of school due to poor health. His father, a horse trader, let him accompany him on trips. While the outdoor life restored his health, Binion never had any formal education. [1] As he traveled with his father, the young man learned to gamble, a favorite pastime when horse traders met up with farmers and merchants during county fair trade days. [2]

Binion moved to El Paso when he was 18, where he began moonshining during the Prohibition Era. [4] A year later, Binion moved to Dallas where he again set up moonshining operations, for which he was twice convicted. [5] In addition to his moonshining, in 1928, Binion opened up an even more lucrative numbers game. [6]

In 1931, Binion was convicted of shooting and killing an African American rum-runner, Frank Bolding, "cowboy style." [7] This was the origin of Binion's "Cowboy" nickname. [8] Binion received a two-year suspended sentence. [8]

In 1936, Binion established a network of private dice games at several Dallas hotels, including the Southland Hotel in downtown Dallas. This came to be known as the Southland Syndicate. [9] By the end of 1936, Binion had gained control of most gambling operations in Dallas, with protection from a powerful local politician. [10]

In 1936, Binion and a henchman killed a numbers operator and competitor, Ben Frieden, emptying their pistols into him. Binion then allegedly shot himself in the shoulder and turned himself in to police, claiming that Frieden had shot him first. Binion was indicted, but the indictment was later dismissed on the grounds that Binion had acted in self-defense. [11] In 1938, Binion and another henchmen allegedly killed Sam Murray, another of Binion's competitors in the gambling rackets. Binion was never indicted for this murder, and charges were dropped against his henchmen. [10]

By the early 1940s, Binion had become the reigning mob boss of Dallas. He then sought to take over the gambling rackets in Fort Worth. The local mob boss of that city, Lewis Tindell, was murdered shortly afterwards. [12]

The Chicago Outfit made a successful move into Dallas after World War II. With the 1946 election of a new Dallas County Sheriff, Steve Guthrie, Binion lost his fix with the local government and fled to Las Vegas. [13] [14]

While in Dallas, Binion had begun a long-running feud with Herbert Noble, a small-time Dallas gambler, which continued after Binion moved to Las Vegas. Binion demanded that Noble increase his payoff to Binion from 25 to 40 percent, which Noble refused to do. [15] Binion posted a reward on Noble's scalp that eventually reached $25,000 and control of a Dallas crap game. [7] Noble survived numerous attempts on his life, sometimes narrowly escaping with gunshot wounds. In November 1949, Noble's wife was killed in a car bombing intended for him. [7] In retaliation, Noble planned to fly his private plane to Las Vegas to bomb Binion's house, but was restrained by local law enforcement before he could execute his plan. [7] In August 1951, as Herbert Noble drove up to his mailbox, a bomb exploded nearby, killing him instantly. [16] [17]

Binion lost his gambling license in 1951, and was sentenced to a five-year term in 1953 at Leavenworth federal penitentiary for tax evasion. [18] 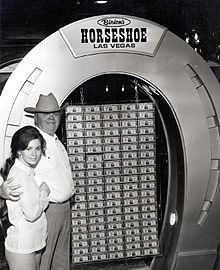 Benny Binion with his youngest daughter Becky (eventual owner of Binion's Horseshoe) in front of the famous $1 million display (c. 1969).

In Las Vegas, Binion became a partner of the Las Vegas Club casino, but left after a year due to licensing problems. [19] In 1949, Benny opened the Westerner Gambling House and Saloon, but he soon sold out after conflicts with his casino partners. [20]

In 1951, he purchased the Eldorado Club and the Apache Hotel, opening them as Binion's Horseshoe casino, which immediately became popular because of the high limits on bets. He initially set a craps table limit of $500, ten times higher than the limit at his competitors of the time. [21] As a result of outdoing the competition, Binion received death threats, although eventually casinos raised their limits to keep up with him. Additionally, the Horseshoe would allow a bet of any size from a player as long as the bet was no larger than the player's initial bet. [22]

Binion was in the vanguard of Las Vegas casino innovation. He was the first in the downtown Glitter Gulch to replace sawdust-covered floors with carpeting, the first to dispatch limousines to transport customers to and from the casino, and the first to offer free drinks to players. [21] Although comps were standard for high rollers, Binion gave them to all players. [23] He also shied away from the gaudy performing acts typical of other Las Vegas casinos. [21]

Binion said he followed a simple philosophy when serving his customers: "Good food, good whiskey cheap, and a good gamble." [21] [24]

Binion was known to be generous to patrons. For many years the Horseshoe had a late night $2 steak special, with most of the meat for the steaks coming from cattle on Binion's ranches in Montana. The Horseshoe is also believed to be the first major casino to offer 100-times-odds at craps (a patron with a bet on the pass or don't-pass lines could take or lay up to 100 times their bet in odds).[ citation needed] The Horseshoe was one of the more profitable casinos in town. [22]

One of the tourist attractions in Binion's was a large horseshoe with $1 million in $10,000 bills, embedded in plastic.

After his trial and conviction in 1953, to cover back taxes and legal costs, Binion sold a majority share in the Horseshoe to fellow gambler and New Orleans oilman Joe W. Brown. [25] Binion’s family regained controlling interest in the Horseshoe in 1957, but did not regain full control until 1964. [26] Benny was never allowed to hold a gaming license afterwards. Instead, his son Jack became the licensee, with Benny assuming the title of Director of Public Relations. [27]

Binion styled himself a cowboy throughout his life. He almost never wore a necktie, and used gold coins as buttons on his cowboy shirts. Despite being technically barred from owning guns, he carried at least one pistol all his life, and kept a sawed-off shotgun close by. His office was a booth in the downstairs restaurant, and he knew many of his customers by name.

Benny Binion didn’t consider himself to be very good at poker, nor did he participate much in competition or private cash games, preferring to organize them. He was, however, inducted posthumously, in 1990, into the Poker Hall of Fame for his contributions to the game. [28]

Jack and Ted took over as president and casino manager, respectively, in 1964. Benny's wife, Teddy Jane, managed the casino cage until her death in 1994. In 1998, Binion's daughter, Becky, took over the presidency after a legal battle, and Jack moved on to other gambling interests. Becky's presidency saw the casino sink into debt. In 2004, federal agents seized $1 million from the Horseshoe's bankroll to satisfy unpaid union benefits, forcing its closure and eventual sale to Harrah's Entertainment. [29] It now operates as Binion's Gambling Hall and Hotel under the ownership of TLC Gaming Group.

Ted was under nearly constant scrutiny from the Nevada Gaming Commission from 1986 onwards for his involvement in drugs and associating with known mob figures. His gaming license was revoked in 1989, and he died in mysterious circumstances about a decade later. Ted's live-in girlfriend (Sandra Murphy) and a man with whom she was having an affair (Rick Tabish) were charged and convicted of his murder, but the verdict was later overturned. They were retried and acquitted. [30]

In January 1949, Binion arranged for Johnny Moss and " Nick the Greek" Dandalos to play a head-to-head poker tournament which ended up lasting five months, with Nick the Greek ultimately losing a reported two million dollars. The 42-year-old Moss had to take breaks to sleep occasionally, during which the Greek, then 57, went over to the craps table and played. After the final hand, and losing millions of dollars, Nick the Greek uttered one of the most famous poker quotes of all time, "Mr. Moss, I have to let you go." (This narrative is disputed as fact and is most likely a myth. Binion didn't operate a casino until 1951 in Las Vegas.)

In 1970, after years of arranging heads-up matches between high-stakes players, Binion invited six players to compete in a tournament. [31] Playing no-limit Texas Hold'em, the players competed for cash at the table, and later took a vote on who was to be named champion. Johnny Moss, then 63, was voted champion by his younger competition and received a small trophy. The following year, a freeze-out format was introduced with a $10,000 buy-in, and the World Series of Poker was born.

Binion's creation of the World Series helped the game of poker spread and become popular. Binion himself greatly underestimated how popular the World Series would become. In 1973, he speculated that eventually the tournament might have 50 or so entrants. [32] However, by 2006, the tournament's main event (not including all of the other events) would have 8,773 entrants.

Benny never forgot his Texas roots and was a key player in getting the National Finals Rodeo to move to Las Vegas. He never forgot the cowboys after they arrived; he always paid the entry fees for all of the cowboys for their championship event. When the casino closed, Boyd Gaming took up the tradition that Binion started by continuing to pay all the entry fees. Every year during the NFR there is a large rodeo stock auction called "Benny Binion's World Famous Bucking Horse and Bull Sale."

Benny Binion was also the owner of a horse named "Nigger" (later referred to as "Benny Binion's Gelding") who was the 1946, 1947 and 1948 National Cutting Horse Association (NCHA) World Champion. [33] Bred by Binion, ridden and trained by George Glascock, the solid black 15 hand gelding is the only horse to capture the NCHA World Championship three years in a row. [34]

Binion died of heart failure at the age of 85 on December 5, 1989 in Las Vegas. [35] Poker great " Amarillo Slim" Preston suggested as an epitaph, "He was either the gentlest bad guy or the baddest good guy you'd ever seen." [36] He was posthumously inducted into the Poker Hall of Fame in 1990.

Relativity Media bought the screen rights to the book Blood Aces: The Wild Ride Of Benny Binion to be written for the screen by Cliff Dorfman, which will be a biopic on Binion's life. [37]