From Wikipedia, the free encyclopedia
American stakes race for Thoroughbreds, part of the Triple Crown
For the 2021 race, see 2021 Belmont Stakes.

The Belmont Stakes is an American Grade I stakes race for three-year-old Thoroughbreds run at Belmont Park in Elmont, New York. Colts and geldings carry a weight of 126 pounds (57 kg); fillies carry 121 pounds (55 kg). The race, nicknamed The Test of the Champion and The Run for the Carnations, is the traditional third and final leg of the Triple Crown. It is usually held on the first or second Saturday in June, five weeks after the Kentucky Derby and three weeks after the Preakness Stakes. The 1973 Belmont Stakes and Triple Crown winner Secretariat holds the mile and a half stakes record (which is also a track and world record on dirt) of 2:24.

When run at 1+1⁄2 miles, the Belmont Stakes covers one full lap of Belmont Park, known as "The Championship Track" because nearly every major American champion in racing history has competed on the racetrack. Belmont Park, with its large, wide, sweeping turns and long homestretch, is considered one of the fairest racetracks in America. [1] Despite the distance, the race tends to favor horses with tactical speed: relatively few winners close from far behind the early leaders. [2]

The attendance at the Belmont Stakes is among the American thoroughbred racing top-attended events. The 2004 Belmont Stakes drew a television audience of 21.9 million viewers, and had the highest household viewing rate since 1977 when Seattle Slew won the Triple Crown. [3] 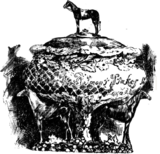 August Belmont Trophy, presented annually to the winning owner since 1926.

The first Belmont Stakes was held at Jerome Park Racetrack in The Bronx, built in 1866 by stock market speculator Leonard Jerome (1817–1891) and financed by August Belmont Sr. (1816–1890), for whom the race was named. The first race in 1867 saw the filly Ruthless win, while the following year was won by General Duke. [5] The race continued to be held at Jerome Park until 1890, when it was moved to the nearby facility, Morris Park Racecourse. [6] The 1895 race was almost not held because of new laws that banned bookmaking in New York: it was eventually rescheduled for November 2. [7] The race remained at Morris Park Racecourse until the May 1905 opening of the new Belmont Park, 430-acre (1.7 km2) racetrack in Elmont, New York on Long Island, just outside the New York City borough of Queens. [6] When anti-gambling legislation was passed in New York State, Belmont Racetrack was closed, and the race was cancelled in 1911 and 1912. [8]

The first winner of the Triple Crown was Sir Barton, in 1919, before the series was recognized as such. [9] In 1920, the Belmont was won by the great Man o' War, who won by 20 lengths, setting a new stakes and American record. [10]

Starting in 1926, the winner of the Belmont Stakes has been presented with August Belmont Trophy. The owner may keep the trophy for one year, and also receives a silver miniature for permanent use. [6] 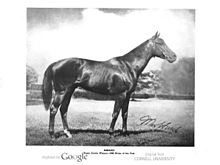 Assault, winner of the 1946 Triple Crown

The Belmont Stakes race was held at Aqueduct Racetrack from 1963 to 1967, while the track at Belmont was restored and renovated.

The largest crowd of the 20th century was in 1971 with over 80,000 people, supplemented by the city's Latino community, there to cheer on their new hero, Cañonero II, the Venezuelan colt who had won the Kentucky Derby and Preakness Stakes and was poised to win the U.S. Triple Crown. However, due to a foot infection that had bothered the horse for several days, Cañonero II failed to win the Triple Crown when he struggled across the finish line in 4th place behind Pass Catcher, ridden by Walter Blum. Despite this loss, Cañonero II was named the winner of the first Eclipse Award for Outstanding Three-Year-Old Male Horse. [17]

On June 9, 1973, Secretariat won the Belmont Stakes by thirty-one lengths in a record time of 2:24, becoming a Triple Crown champion, ending a 25-year gap between Citation, the Belmont and Triple Crown winner in 1948. Secretariat's record still stands as the fastest running of the Belmont Stakes and an American record for 1½ miles on the dirt. [18] In 1977, Seattle Slew became the first horse to win the Triple Crown while undefeated. Affirmed was the last winner of the Triple Crown in the 20th century, taking the Belmont Stakes in 2:26 4/5 on June 10, 1978. Ridden by eighteen-year-old Steve Cauthen, Affirmed defeated rival Alydar with Jorge Velásquez in the saddle. At the time the race was the third-slowest start and the third-fastest finish with the quarter in 25, the half in 50, 3/4 in 1:14, the mile in 1:37 2/5. [19]

In 1988, Secretariat's son Risen Star won the Belmont in 2:26 2/5, then the second-fastest time in the history of the race. The next year, Easy Goer lowered the mark for second-fastest time to 2:26. Easy Goer also holds a Beyer Speed Figure of 122 for the race, the best of any Triple Crown race since these ratings were first published in 1987. [20]

For three years in a row, horses came to the Belmont Stakes with a Triple Crown on the line only to fail. In 2002, Belmont Park hosted what was then the largest crowd in its history when 103,222 saw War Emblem lose to longshot Sarava after stumbling at the start. In 2003, 101,864 watched Funny Cide finish third behind Empire Maker. In 2004, the attendance record was shattered when 120,139 people saw Smarty Jones upset by Birdstone. [21]

In 2007, Rags to Riches became the first filly to win the race since Tanya in 1905. Three more failed Triple Crown bids followed: in 2008, Big Brown lost to Da' Tara; in 2012, I'll Have Another was withdrawn due to injury; and in 2014, California Chrome was beaten by Tonalist. This fueled debate about whether the series needed to be changed, for example by lengthening the period between races. [22]

American Pharoah won the 2015 race, becoming the 12th horse in history to win the Triple Crown and the first in 37 years. The crowd that year was limited for the first time, to 90,000. [23] His time of 2:26.65 was the sixth-fastest in Belmont Stakes history, and the second-fastest time for a Triple Crown winner. [24] In 2018, Justify became the 13th Triple Crown winner and only the second horse to do so while undefeated. [25]

The 152nd running of the Belmont Stakes took place without in-person fans on June 20, 2020, [26] delayed from June 6 as a result of the COVID-19 pandemic. Leading to the announcement, NYRA considered various dates after evaluating the spring-summer meeting at Belmont Park and after the other three majors set their respective dates: the Kentucky Derby moving to September 5, the Preakness Stakes moving to October 3, and the Breeders' Cup Classic slated for November 7. Governor Andrew Cuomo of New York announced on May 16 that horse racing tracks statewide, including Belmont Park, would be permitted to resume races without in-person fans on June 1. [27] The 2020 contest also marked the first time in history that the Belmont Stakes served as the Triple Crown's opening leg, with its running length shortened accordingly to 1+1⁄8 miles (9 furlongs), [28] its shortest distance since 1894. [29]

With one exception, the race has been run at a level weight of 126 pounds (with a 5-pound allowance for fillies) since 1900. The 126 pounds comes from the English Classics, where the standard weight is 9 stone, with one stone equaling 14 pounds. In 1913, the Belmont was run as a handicap with the winner carrying only 109 pounds compared to the runner-up carrying 126 pounds. Races run prior to 1900 had varied weight conditions. [5]

The first post parade in the United States was at the 14th Belmont, in 1880. Before 1921, the race was run in the clockwise tradition of English racing. Since then, the race has been run in the American, or counter-clockwise, direction.

The winner's blanket, made of white carnations

The Belmont Stakes is traditionally called "The Test of the Champion" because it is by far the longest of the Triple Crown races (1.5 miles–a full lap around the enormous Belmont main track). It is also one of the longest first-class races on dirt in the United States. Most three-year-olds are unaccustomed to the distance, and lack the experience, if not the stamina, to maintain a winning speed for so long. In a long race such as the Belmont, positioning of the horse and the timing of the move to chase for the lead can be critical.

It is also known as "The Run for the Carnations" because the winning horse is draped with a blanket of white carnations after the race, in similar fashion to the blanket of roses and black-eyed Susans for the Derby and Preakness, respectively. The winning owner is ceremonially presented with the silver winner's trophy, designed by Paulding Farnham for Tiffany and Co. It was first presented to August Belmont Jr. in 1896 and donated by the Belmont family for annual presentation in 1926.

Despite the fact that the Belmont Stakes is the oldest of the Triple Crown races, its traditions have been more subject to change. Until 1996, the post parade song was " The Sidewalks of New York". From 1997 to 2009, the song was changed to broadcast a recording by Frank Sinatra of the " Theme from New York" in an attempt to appeal to younger fans. [32] In 2010, the song was changed to Jay-Z's " Empire State of Mind" sung by Jasmine V [33] before reverting to "Theme from New York" from 2011 [34] through the present. This tradition is similar to the singing of the state song at the post parades of the first two Triple Crown races: " My Old Kentucky Home" at the Kentucky Derby and " Maryland, My Maryland" at the Preakness Stakes. [6] The change of song gave rise to "the myth of Mamie O'Rourke", a reference to a character in the lyrics of "The Sidewalks of New York." Before American Pharoah won the Triple Crown in 2015, some claimed that changing the official Belmont song "cursed" the Triple Crown and was why no horse had won since Affirmed in 1978. Others note that there was no Triple Crown winner between 1979 and 1996, even though "Sidewalks" was still played. [35]

Along with the change of song in 1997, the official drink was also changed, from the "White Carnation" to the "Belmont Breeze." [36] The New York Times reviewed both cocktails unfavorably, calling the Belmont Breeze "a significant improvement over the nigh undrinkable White Carnation" despite the fact that it "tastes like a refined trashcan punch." [37] In 2011, the Belmont Breeze was again changed to the current official drink known as the "Belmont Jewel."

From 1986 until 2005, the Triple Crown television rights comprised a single package. In late 2004, the New York Racing Association withdrew from that agreement to negotiate independently. [39] As a result of this NBC, who was the rights holder for all three events, was only able to keep its broadcast rights to the Kentucky Derby and Preakness Stakes. ABC regained the rights to the Belmont Stakes as part of a five-year contract that expired following the 2010 race; NBC has since regained the rights to the race through 2020. 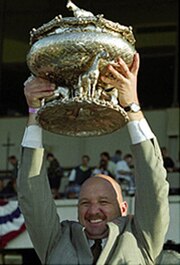 Fillies in the Belmont

Only 23 fillies have run in the Belmont; three of which have won:

This gives them a respectable 13% win rate when entered. [46] For context, three fillies have won the Kentucky Derby while six have won the Preakness Stakes. On average, fillies have won between 2% and 3% of the Triple Crown races, with similar numbers for geldings; while about 95% of these races have been won by colts. The last filly as of November 2017 to run in the Belmont was in 2013 when Unlimited Budget ran six behind the winner Palace Malice.

Triple Crown winners are in bold.

A † designates a filly.