UBS Arena is a $1.5 billion [6] multi-purpose arena under construction and development in Elmont, New York, next to the Belmont Park race track. The venue is projected to open for the 2021–22 NHL season. The arena will serve as the home of the New York Islanders of the National Hockey League (NHL) [7] and will host around 150 major events annually. [6] UBS holds the exclusive naming rights to the arena. [8]

On July 12, 2010, Town Supervisor Kate Murray (R-Hempstead) announced an “alternate zone” created for the Nassau Veterans Memorial Coliseum property, downsizing the original Lighthouse Project to half its proposed size and making the project, according to then-Nassau County Executive Ed Mangano and the developers, "economically unviable for both the developer and owner of the site". From that point, the Lighthouse Project would no longer be pursued by then-Islanders owner Charles Wang, Mangano and the developers. [12]

In May 2010, Jeff Wilpon, COO of the New York Mets of Major League Baseball, had discussions with Wang about constructing a new arena for the Islanders in the Willets Point neighborhood of Queens, adjacent to the Mets' ballpark, Citi Field. Wilpon also discussed the possibility of buying the Islanders. [13] In June 2010, the website FanHouse reported that Jeff and Fred Wilpon, the owner of the Mets, began working with real estate firm Jones Lang LaSalle (who is also working on the renovation of Madison Square Garden) on a feasibility study of a new Islanders arena in Queens. [14] However, a source from Newsday indicated that the FanHouse report was not true. [15] There were also reports that businessman Nelson Peltz wanted to buy the Islanders and move them to Barclays Center in Brooklyn. [16]

On May 11, 2011, the Islanders and Nassau County executives announced that county residents would vote on a referendum for approval of a $400 million public bond issue for a new plan to replace the Coliseum. The plan, including the construction of a new $350 million arena as well as a $50 million minor league baseball ballpark nearby, was presented by Wang as a last-ditch effort to keep the Islanders in Nassau County. [17] However, voters in Nassau County rejected a proposal by a 57% to 43% margin on August 1, 2011.

On October 24, 2012, the Islanders announced the team would move to Barclays Center in Brooklyn after their lease expired at the end of the 2014–15 season. [18]

Since the Islanders moved to Barclays Center, there have been numerous complaints about obstructed-view seats. [19] The arena was built primarily for basketball, and has a hockey configuration in which the scoreboard is off-centered above the blue line, and an asymmetrical seating configuration with only three rows of permanent seating on the northwest end of the arena. As a result, many seats are obstructed, with several hundred not sold at all. [20] Business Insider has called sections 201 to 204 and 228 to 231 "the worst seat in American professional sports". [21] In an interview with Sports Illustrated, Barclays Center CEO Brett Yormark acknowledged the issue, but insisted nothing can be done: "There's really nothing we’re going to do from a capital improvement standpoint. You can watch the game on your mobile device. The game is on the scoreboard." [22] There have been numerous complaints about the quality of the ice during hockey games. The arena uses PVC piping instead of steel piping under the ice surface, making it much harder to maintain NHL standards and temperature. [23] 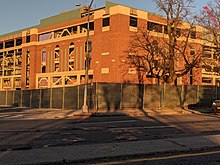 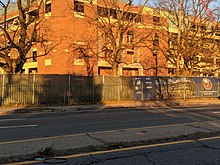 On September 23, 2019, the groundbreaking for the arena was held. It was attended by New York Governor Andrew Cuomo, NHL commissioner Gary Bettman, and officials, alumni and current players from the Islanders. [24]

On May 27, 2020, construction resumed as part of Cuomo's phased regional reopening plan for New York State. Team officials said that they expect construction to finish in time for the Islanders to begin play there in October 2021, despite the two-month pause. [25]

The $1.5 billion project and surrounding redevelopment expected to generate approximately $25 billion in economic activity, including major infrastructure improvements, 10,000 construction jobs, and 3,000 permanent jobs [27] of which 30% are to be set aside for local residents.

The $1.5 billion private investment into the arena and the overall surrounding campus will provide a significant boost, of approximately $25 billion, to the regional economy at a time when economic activity has slowed due to the COVID-19 pandemic. [28] The project will also inject much needed stimulus into the New York economy and the local community, with the goal of filling 30% of UBS Arena's permanent jobs with workers who live in the surrounding area. Thirty percent of contracting dollars for construction will also be earmarked for state-certified minority and female-owned businesses, and 6% will be earmarked for service-disabled veteran-owned businesses. [27] There also are plans for an additional $100 million investment in transit and infrastructure enhancements, including the first newly constructed Long Island Rail Road station in almost 50 years.

The arena will host a college basketball game between Kansas and nearby St. John's on December 2, 2021. [29]