From Wikipedia, the free encyclopedia
Genus of fish
For other uses, see Barracuda (disambiguation).
Not to be confused with Barramunda.

A barracuda, or cuda for short, is a large, predatory, ray-finned fish known for its fearsome appearance and ferocious behaviour. The barracuda is a saltwater fish of the genus Sphyraena, the only genus in the family Sphyraenidae, which was named by Constantine Samuel Rafinesque in 1815. [2] It is found in tropical and subtropical oceans worldwide ranging from the eastern border of the Atlantic Ocean to the Red Sea, on its western border the Caribbean Sea, and in tropical areas of the Pacific Ocean. Barracudas reside near the top of the water and near coral reefs and sea grasses. [3] Barracudas are targeted by sport-fishing enthusiasts. 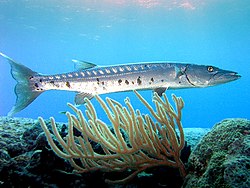 Great barracuda hovering in the current at the Paradise Reef, Cozumel, Mexico

Barracuda are snake-like in appearance, with prominent, sharp-edged, fang-like teeth, much like piranha, all of different sizes, set in sockets of their large jaws. They have large, pointed heads with an underbite in many species. Their gill covers have no spines and are covered with small scales. Their two dorsal fins are widely separated, with the anterior fin having five spines, and the posterior fin having one spine and 9 soft rays. The posterior dorsal fin is similar in size to the anal fin and is situated above it. The lateral line is prominent and extends straight from head to tail. The spinous dorsal fin is placed above the pelvic fins and is normally retracted in a groove. The caudal fin is moderately forked with its posterior edged double-curved and is set at the end of a stout peduncle. The pectoral fins are placed low on the sides. The swim bladder is large, allowing for minimal energy expenditure while cruising or remaining idle. [4]

In most cases, barracuda are dark gray, dark green, white, or blue on the upper body, with silvery sides and a chalky-white belly. Coloration varies somewhat between species. For some species, irregular black spots or a row of darker cross-bars occur on each side. Their fins may be yellowish or dusky. Barracudas live primarily in oceans, but certain species, such as the great barracuda, live in brackish water. Due to similarities, sometimes Barracuda is compared with freshwater Pike, though the major difference between the two is that Barracuda has two separate dorsal fins with a forked tail, unlike the freshwater pike. [5] [6]

Some species grow quite large (up to 65 inches or 165 cm in length), [7] such as Sphyraena sphyraena, found in the Mediterranean Sea and eastern Atlantic; Sphyraena picudilla, ranging on the Atlantic coast of tropical America from North Carolina to Brazil and reaching Bermuda. Other barracuda species are found around the world. Examples are Sphyraena argentea, found from Puget Sound southwards to Cabo San Lucas, Sphyraena jello, from the seas of India and the Malay Peninsula and Archipelago.

Barracudas are ferocious, opportunistic predators, relying on surprise and short bursts of speed, up to 27 mph (43 km/h), [11] to overtake their prey.

Adults of most species are more or less solitary, while young and half-grown fish frequently congregate. Barracudas prey primarily on fish (which may include some as large as themselves). They kill and consume larger prey by tearing chunks out of their prey. Barracuda species are often seen competing against mackerel, needle fish and sometimes even dolphins for prey. [3]

Barracuda feed on an array of prey including fish such as jacks, grunts, groupers, snappers, small tunas, mullets, killifishes, herrings, and anchovies by simply biting them in half. [12] They also seem to consume smaller species of sustenance that are in front of them.

Barracudas are usually found swimming in saltwater searching for schools of plankton-feeding fish. Their silver and elongated bodies make them difficult for prey to detect, and even more difficult to be seen when viewing them head-on. Barracudas depend heavily on their eyesight when they are out hunting. When hunting, they tend to notice everything that has an unusual color, reflection, or movement. Once a barracuda targets an intended victim, its long tail and matching anal and dorsal fins enable it to move with swift bursts of speed to attack its prey before it can escape. Barracudas generally attack schools of fish, speeding at them head first and biting at them with their jaws. When barracudas age, they tend to swim alone. However, there are times where they tend to stay with the pack. Barracudas will sometimes swim in groups. In this case, they can relocate schools of fish into compact areas or lead them into shallow water to more easily feed on them. [13]

Some species of barracuda are reputed to be dangerous to swimmers. Barracudas are scavengers, and may mistake snorkellers for large predators, following them hoping to eat the remains of their prey. Swimmers have reported been bitten by barracudas, but such incidents are rare and possibly caused by poor visibility. Large barracudas can be encountered in muddy shallows on rare occasion. Barracudas may mistake things that glint and shine for prey. [14] One incident reported a barracuda jumping out of water and injuring a kayaker, [15] but Jason Schratwieser, conservation director of the International Game Fish Association, said that the wound could have been caused by a houndfish. [16]

Barracudas are popular both as food and game fish. They are most often eaten as fillets or steaks. Larger species, such as the great barracuda, have been implicated in cases of ciguatera food poisoning. [17] Those who have been diagnosed with this type of food poisoning display symptoms of gastrointestinal discomfort, limb weakness, and an inability to differentiate hot from cold effectively. [12]

West Africans smoke them for use in soups and sauces. Smoking protects the soft flesh from disintegrating in the broth and gives it a smoky flavour.

The barracuda prominently appeared in the 2003 Disney/ Pixar animated film Finding Nemo, in the beginning of the film, when it attacks the two clownfish Marlin ( Albert Brooks), Coral ( Elizabeth Perkins), Nemo ( Alexander Gould) and their eggs who lives in the sea anemone by the drop off in the Great Barrier Reef in Australia. Before the main titles in the film and in the 3D version release in 2012, the barracuda closes its teeth and the bottom lip is shown in the film. (The same barracuda also appeared as an easter egg in the 2019 Disney/Pixar animated film Toy Story 4. It was stuffed and mounted in display in the Second Chances antique store.)[ citation needed]

The Pokémon Arrokuda and its evolution Barraskewda (both introduced to the franchise in Pokémon Sword and Shield) are based on the barracuda.

The Plymouth Barracuda is a two-door pony car that was manufactured by Plymouth from 1964 to 1974.