From Wikipedia, the free encyclopedia
soccer stadium in Los Angeles

Banc of California Stadium is a soccer-specific stadium in the Exposition Park neighborhood of Los Angeles, California. It is the home of Major League Soccer's Los Angeles FC and future home of the National Women's Soccer League's Angel City FC. Opened on April 18, 2018, [6] [3] it was the first open-air stadium built in the City of Los Angeles since 1962. [7] Constructed on the site of the former Los Angeles Memorial Sports Arena, it is located next to the Los Angeles Memorial Coliseum and just south of the main campus of the University of Southern California. Los Angeles FC subleases the site from the University which has a master lease with the LA Memorial Coliseum Commission for operating and managing the Coliseum and stadium properties.

In June 2020, the club announced that Banc of California stepped away as the naming rights holder for the stadium, and that it will no longer be called Banc of California Stadium. As a consequence, the bank will pay a termination fee of $20.1 million. [8]

The Los Angeles Times reported on May 17, 2015 that the team chose the Los Angeles Memorial Sports Arena site to build a 22,000-seat state-of-the-art stadium for the MLS in Exposition Park, costing $250 million. The group estimated the project would create 1,200 temporary construction jobs and 1,800 full-time jobs, generating $2.5 million in annual tax revenue. [9] The environmental impact report, arena demolition, and stadium construction were expected to take three years and delay the team's debut to 2018.

A groundbreaking ceremony took place on August 23, 2016. At the event attended by owners and construction crews, LAFC announced a 15-year, $100 million naming rights deal for the stadium with the Banc of California. [10] [11] [12] Demolition of the Los Angeles Memorial Sports Arena began shortly after the groundbreaking and was completed by October 2016. [13] [14] 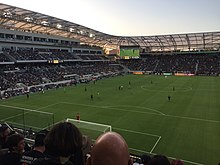 The west and north sides during the home opener

The first public event at the stadium was an open practice and dedication ceremony held on April 18, 2018. [15] The club's first match was played on April 29 against Seattle Sounders FC, with the home side winning 1–0. [16] [17] The lone goal was scored by Laurent Ciman in stoppage time in front of a capacity crowd of 22,000. [17]

On May 26, 2020, Banc of California announced that they planned to end the naming rights deal, paying $20 million for early termination but remaining the club's banking sponsor. A new naming rights sponsor will be sought by LAFC. [18]

In November 2020, it was announced that the newly formed Angel City FC of the National Women's Soccer League would play at the stadium.

The ground's North End is home to the "3252" supporters group, so named for the number of seats in the safe standing section. It was built at an incline of 34 degrees and features angled handrails that are designed to resemble those used on rollercoasters. The central section of the stand has a removable stage for use during concerts and other events outside of sports. On top of the North End is a supporter-designed bar which can only be accessed from 3252 section. [21]

A northeast slice of the stadium was designed to be open to capture the downtown Los Angeles skyline and the San Gabriel Mountains. Members of the media in the angled press box have one of the best vantage points to peer through the "keyhole". [22]

The stadium will be a part of the Downtown Sports Park and host some track and field events and both men's and women's soccer when Los Angeles hosts the 2028 Summer Olympics. [23]

It was announced on April 4, 2017, that the stadium would be host to rugby sevens tournaments. It will be the permanent home of the Grand Prix Rugby Series, the world's richest rugby sevens championship in history. [24] [25]

The stadium was a venue for the 2019 CONCACAF Gold Cup. It hosted two matches in Group C.

Banc of California Stadium is also designed to host concerts and other musical events. The stadium hosted KIIS-FM's Wango Tango concert on June 2, 2018. [28] Iron Maiden's Legacy of the Beast World Tour was announced for September 14, 2019. [29] Mumford & Sons brought their Delta Tour to the stadium on August 3, 2019. Beck appeared in October 2018. [30]

LAFC has stated that Banc of California will be used for local cultural events in Los Angeles's 9th District.

In June 2018, Epic Games held a celebrity pro-am event for its multiplayer online video game Fortnite Battle Royale at Banc of California Stadium, as part of events coinciding with the 2018 Electronic Entertainment Expo (E3). The event was won by a team of professional player Ninja and electronic music producer Marshmello. [31]