From Wikipedia, the free encyclopedia
CSA in the United States 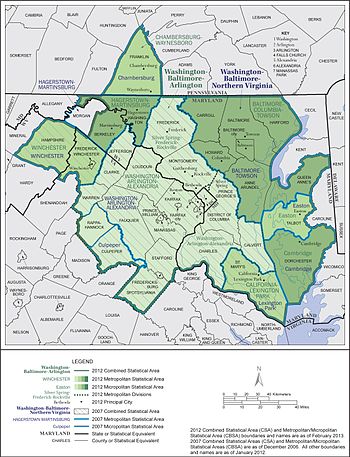 The Baltimore–Washington metropolitan area is a combined statistical area consisting of the overlapping labor market region of the cities of Washington, D.C. and Baltimore, Maryland. The region includes Central Maryland, Northern Virginia, three counties in the Eastern Panhandle of West Virginia, and one county in South Central Pennsylvania. It is the most educated, highest-income, and third largest combined statistical area in the United States. [1] [2]

Officially, the area is designated by the Office of Management and Budget (OMB) as the Washington–Baltimore–Arlington, DC–MD–VA–WV–PA Combined Statistical Area. It is composed primarily of two major metropolitan statistical areas (MSA), the Washington–Arlington–Alexandria, DC–VA–MD–WV MSA and the Baltimore–Columbia–Towson, MD MSA. In addition, five other smaller urban areas not contiguous to the main urban area but having strong commuting ties with the main area are also included in the metropolitan area. [3] These are: the Hagerstown–Martinsburg, MD–WV MSA, the Chambersburg–Waynesboro, PA MSA, the Winchester, VA–WV MSA, the California–Lexington Park, MD MSA, and the Easton, MD micropolitan statistical area (µSA).

Some counties such as Caroline and King George County, Virginia are not officially designated by the OMB as members of this metropolitan area, but still consider themselves members anyway. [4] [5] [6] [7] [8] This is mostly due to their proximity to the area, the size of their commuter population, and by the influence of local broadcasting stations. The population of the entire Washington-Baltimore Combined Statistical Area as of the Census Bureau's 2012 Population Estimates is 9,331,587. [9] [10] [11] [12] [13] [14] [15] The most populous city is Washington, DC, with a population of 681,170. [16] The most populous county is Fairfax County, Virginia, with a population exceeding 1.1 million.

Components of the metropolitan area

The counties and independent cities and their groupings that comprise the metropolitan area are listed below with their 2012 population estimates. Central counties/cities (designated as such by OMB) for each MSA are shown in italics.

Founded in 1957, the Metropolitan Washington Council of Governments (MWCOG) is a regional organization of 23 Washington-area local governments, as well as area members of the Maryland and Virginia state legislatures, the U.S. Senate, and the U.S. House of Representatives. MWCOG provides a forum for discussion and the development of regional responses to issues regarding the environment, transportation, public safety, homeland security, affordable housing, community planning, and economic development. [17]

The National Capital Region Transportation Planning Board, a component of MWCOG, is the federally designated Metropolitan Planning Organization for the metropolitan Washington area. [18]

The Baltimore Metropolitan Council is the equivalent organization for the Baltimore portion of the combined Baltimore–Washington metropolitan area. [19] The BMC, which was created in 1992 as the successor to the Regional Planning Council and Baltimore Regional Council of Governments, consists of the Baltimore region's elected executives, representing Baltimore City and Anne Arundel, Baltimore, Carroll, Harford and Howard counties. [20]

Not limited to its proximity to the National Institutes of Health in Bethesda, Maryland's Washington suburbs are a major center for biotechnology. Prominent local biotechnology companies include MedImmune, United Therapeutics, The Institute for Genomic Research, Human Genome Sciences and the Howard Hughes Medical Institute.

Notable company headquarters in the region

Table of professional teams and venues 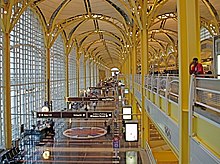 The Capital Beltway (I-495) in Northern Virginia 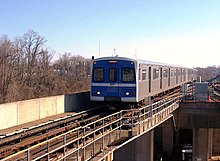