Ballona Creek (Río de La Ballona) is an 8.8-mile-long (14.2 km) [2] urbanized river in southwestern Los Angeles County, California, whose watershed includes a portion of the western Los Angeles basin, from the Santa Monica Mountains on the north, the Harbor Freeway (I-110) on the east, and the Baldwin Hills on the south.

Duck hunting on the Ballona lowlands, 1890.

During the Pre-Columbian era, Tongva people existed as hunters and gatherers in small villages throughout the Ballona Creek watershed and other parts of the Los Angeles basin. Native American culture and land management practice was disrupted by the arrival of Spanish explorers. [4]

In 1769, the Tongva met their first Europeans when Portola expedition came through on its way north. Continuing west after crossing the Los Angeles River, diarist Fray Juan Crespi noted that the party "came across a grove of very large alders...from which flows a stream of water...The water flowed afterwards in a deep channel towards the southwest". Researchers identified the place as the headwaters of Ballona Creek. The explorers made camp nearby on August 3. [5]

Around 1820, a mestizo rancher named Augustine Machado began grazing his cattle on the Ballona wetlands and claimed a fourteen-thousand acre Mexican land grant that stretched from modern-day Culver City to Pico Boulevard in Santa Monica, California. Ballona Creek and Lagoon are named for the Ballona or Paseo de las Carretas land grant, dated November 27, 1839. The Machado and Talamantes families, co-grantees of the rancho, heralded from Baiona in northern Spain. [6] [7] After the Mexican-American War followed by statehood in California History with court decisions, the Ballona land grant claims were lost, and real estate speculation, this area of Los Angeles County experienced rapid growth, with open land being transformed into agricultural use alongside small towns and new cities such as Culver City, Venice (later incorporated into Los Angeles), and Santa Monica. 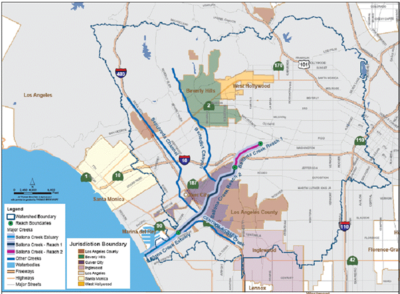 At the time of Spanish settlement, the Los Angeles River turned to the west just south of present-day Bunker Hill, joining Ballona Creek just to the west of its current channel. However, during a major flood in 1825, the Los Angeles River's course changed to its present channel, and Ballona Creek became a completely distinct waterway. Much of the above-ground section of the creek was lined with concrete as part of the flood-control project undertaken by the United States Army Corps of Engineers following the Los Angeles Flood of 1938. [8]

Ballona Creek Watershed climate can be characterized as Mediterranean with average annual rainfall of approximately 15 inches per year over most of the developed portions of the watershed. The flow rate in the Creek varies considerably from a trickle flow of about 14 cubic feet (0.40 m3) per second during dry weather to 71,400 cubic feet (2,020 m3) per second during a 50-year storm event. [3] Ballona Wetlands and Del Rey Lagoon are connected to the Ballona Estuary through tide gates.

From northern source to southern mouth (year built in parentheses): [9]

The historical and current wetland and estuarine tidal river at the mouth of Ballona Creek occupied approximately 2,000 acres (810 ha). Although much of the wetland was drained and developed, a portion remains protected. The State of California owns 600 acres (240 ha) of the former wetlands; the CDFW (California Department of Fish and Wildlife) owns 540 acres (220 ha), and the State Lands Commission owns 60 acres (24 ha), including a newly created freshwater marsh. Much of these preserved lands are designated as the Ballona Wetlands Ecological Reserve and despite historic degradation, conditions are improving. Wetland flora includes pickleweed, marsh heather, saltgrass, salt marsh dodder, arrowgrass, glasswort, alongside a mix of native and naturalized upland plant species including coyote bush, brome, Lewis primrose, iceplant, goldenbush, oxalis, laurel sumac, and ryegrass. Bird species of special interest observed in the reserve include nesting pairs of Belding's Savannah sparrow (Passerculus rostratus/sandwichensis beldingi) and foraging use by California least terns (Sterna antillarum browni). [10]

The urbanization of the watershed, and associated with it the pollution of urban runoff and stormwater, has degraded the water quality in Ballona Creek and its estuary. Ballona Creek is listed by the Los Angeles Regional Water Quality Control Board impaired for fecal coliform, heavy metals, and pesticides. Dry weather urban runoff and storm water, both conveyed by storm drains, are the primary sources of pollution in the riverine coastal estuary.

In the 1997 movie Volcano, Mike Roark ( Tommy Lee Jones) dropped a 20-story apartment building in a controlled demolition in order to divert a flowing river of lava into Ballona Creek and thus into the Pacific Ocean.