Baldwin Hills is a neighborhood within the South Los Angeles region of Los Angeles California. It is home to Kenneth Hahn State Regional Park and to Village Green, a National Historic Landmark. As of end of 2020, Baldwin Hills ranks number two among top 10 richest black communities in US, with an average family income of $157,033, and it has been nicknamed as Black Beverly Hills after black musicians and actors have moved into the area. [1]

The namesake mountain range is part of the neighborhood.

View from Baldwin Hills of Downtown Los Angeles in the distance and the San Gabriel Mountains. 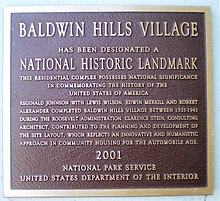 Neighborhoods within Baldwin Hills include:

According to the Mapping L.A. project, Baldwin Hills is part of the larger neighborhood of Baldwin Hills/Crenshaw. 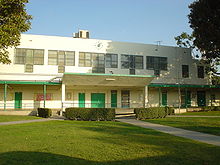 From 2007 to 2009, BET aired Baldwin Hills, a program featuring several African-American teenagers and their lives in the upper-class Los Angeles community. [23] [24]

The show is very similar in nature to such MTV programs as Laguna Beach: The Real Orange County, The Hills, and the online series The Suburbs, as it features African-Americans of upper-middle-class families who divide their time between attending school, playing sports, shopping at high-end stores, and driving expensive cars. The series lasted for three seasons.