From Wikipedia, the free encyclopedia
Genus of flowering plants in the heath family Ericaceae
For other uses, see Azalea (disambiguation). 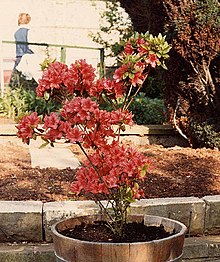 Azaleas /əˈzeɪliə/ are flowering shrubs in the genus Rhododendron, particularly the former sections Tsutsuji (evergreen) and Pentanthera (deciduous). Azaleas bloom in the spring (April and May in the temperate Northern Hemisphere, and October and November in the Southern Hemisphere), [1] their flowers often lasting several weeks. Shade tolerant, they prefer living near or under trees. They are part of the family Ericaceae.

Plant enthusiasts have selectively bred azaleas for hundreds of years. This human selection has produced over 10,000 different cultivars which are propagated by cuttings.[ citation needed] Azalea seeds can also be collected and germinated.

Azaleas are native to several continents including Asia, Europe and North America. They are planted abundantly as ornamentals in the southeastern US, southern Asia, and parts of southwest Europe.[ citation needed]

According to azalea historian Fred Galle, in the United States, Azalea indica (in this case, the group of plants called Southern indicas) was first introduced to the outdoor landscape in the 1830s at the rice plantation Magnolia-on-the-Ashley in Charleston, South Carolina. From Philadelphia, where they were grown only in greenhouses, John Grimke Drayton (Magnolia's owner) imported the plants for use in his estate garden. With encouragement from Charles Sprague Sargent from Harvard's Arnold Arboretum, Magnolia Gardens was opened to the public in 1871, following the American Civil War. Magnolia is one of the oldest public gardens in America. Since the late 19th century, in late March and early April, thousands visit to see the azaleas bloom in their full glory.[ citation needed] 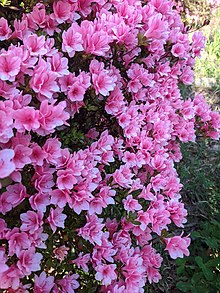 Azalea leafy gall can be particularly destructive to azalea leaves during the early spring. Hand picking infected leaves is the recommended method of control. [3]

They can also be subject to Phytophthora root rot in moist, hot conditions. [4]

Azaleas share the economically important disease Phytophthora cinnamomi with more than 3000 other plants. [5]: 199

Azaleas share the Azalea lace bug ( Stephanitis pyrioides) with many other heath species. [6] Shrewsbury & Raupp 2000 find azaleas can be protected from them by companion planting with an overstory above them. [6] 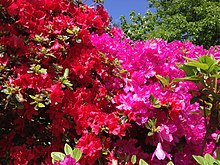 In Chinese culture, the azalea is known as "thinking of home bush" (sixiang shu), and is immortalized in the poetry of Du Fu.

The azalea is also one of the symbols of the city of São Paulo, Brazil. [7]

Azaleas and rhododendrons were once so infamous for their toxicity that to receive a bouquet of their flowers in a black vase was a well-known death threat. [8]

In addition to being renowned for its beauty, the azalea is also highly toxic—it contains andromedotoxins in both its leaves and nectar, including honey from the nectar. [9] Bees are deliberately fed on Azalea/ Rhododendron nectar in some parts of Turkey, producing a mind-altering, potentially medicinal, and occasionally lethal honey known as " mad honey". [10] 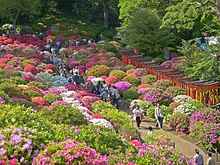 Motoyama, Kōchi also has a flower festival in which the blooming of Tsutsuji is celebrated and Tatebayashi, Gunma is famous for its Azalea Hill Park, Tsutsuji-ga-oka. Nezu Shrine in Bunkyo, Tokyo, holds a Tsutsuji Matsuri from early April until early May. Higashi Village has hosted an azalea festival each year since 1976. The village's 50,000 azalea plants draw an estimated 60,000 to 80,000 visitors each year. 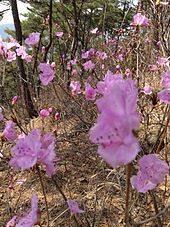 Sobaeksan, one of the 12 well-known Sobaek Mountains, lying on the border between Chungbuk Province and Gyeongbuk has a royal azalea ( Rhododendron schlippenbachii) festival held on May every year. Sobaeksan has an azalea colony dotted around Biro mountaintop, Gukmang and Yonwha early in May. When royal azaleas have turned pink in the end of May, it looks like Sobaeksan wears a pink Jeogori (Korean traditional jacket). [11] 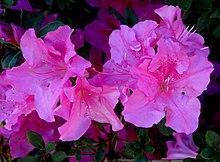 The Azalea Trail is a designated path, planted with azaleas in private gardens, through Mobile, Alabama. [19] The Azalea Trail Run is an annual road running event held there in late March. Mobile, Alabama is also home to the Azalea Trail Maids, fifty women chosen to serve as ambassadors of the city while wearing antebellum dresses, who originally participated in a three-day festival, but now operate throughout the year.[ citation needed]

Valdosta, Georgia is called the Azalea City, as the plant grows in profusion there. The city hosts an annual Azalea Festival in March.