Avondale is a city in Maricopa County, Arizona, United States, adjacent to Phoenix. According to the 2019 U.S. Census estimates, the population of the city is 87,931. [2]

Avondale, incorporated in 1946, has experienced rapid residential and commercial growth in the years since 1980. Once primarily a sparsely populated farming community with many acres of alfalfa and cotton fields, Avondale has transformed into a major bedroom suburb for Phoenix.

Phoenix Children's Hospital has a satellite facility (the Southwest Valley Urgent Care Center), at the corner of Avondale Boulevard and McDowell Road.

Avondale first appeared on the 1920 U.S. Census as the 45th Precinct of Maricopa County (AKA Coldwater). [5] In 1930, it simply appeared as the Coldwater Precinct. It was recorded as having a Spanish/Hispanic majority for that census [6] (the census would not separately feature that racial demographic again until 1980). With the combination of all county precincts into 3 districts in 1940, it did not report on that census. In 1946, it was incorporated as the town of Avondale, and has appeared on every census since 1950. In 1959, it upgraded to a city. [7]

Avondale has a large amount of sunshine year round due to its stable descending air and high pressure. According to the Köppen Climate Classification system, the city has a Hot desert climate, abbreviated "Bwh" on climate maps. [10]

Snow is rare in the area, occurring once every several years. Lows in the winter occasionally dip below freezing, which may damage some desert plants such as saguaros and other cacti. In the summer (mainly July, August and early September), the North American Monsoon can hit the Phoenix area in the afternoon and evening (possibly continuing overnight), causing rain showers even from a sunny morning. Dust storms are occasional, mainly during the summer. 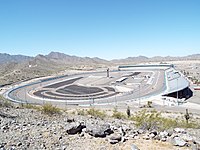 The City of Avondale Parks and Recreation Department offers sports for both youth and adults. [14] 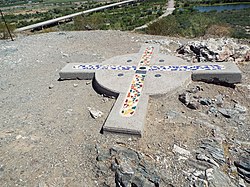 The initial point of the Gila and Salt River Meridan.
Further information: List of historic properties in Avondale, Arizona

The surveying marker of the Gila and Salt River Meridan is located on Monument Hill. Ever since 1851, this has been the center point used by the state to measure the land in Arizona. The federal government recognized this point for measuring the boundary between the United States and Mexico after the Mexican–American War ended. The first survey, conducted in 1867, involved the first 36 miles (58 km) of Arizona. Up until 1874, this was the epicenter of all surveying in Arizona for property deeds. It was listed in the National Register of Historic Places on October 15, 2002, Reference #02001137. Monument Hill is located at 115th Avenue and Baseline Road in Avondale. [16]