It is on the site of what was Bergstrom Air Force Base. The airport and U.S. Air Force base were named after Captain John August Earl Bergstrom, an officer who served with the 19th Bombardment Group. [3] The airport replaced Robert Mueller Municipal Airport as Austin's main airport. The airport is the third-busiest in Texas after Dallas/Fort Worth International Airport and George Bush Intercontinental Airport. [4] As of 2018 [update], there are 510 arrivals and departures on the typical weekday to 76 destinations in North America and Europe. [5]

In 1942, the city of Austin purchased land and donated the land to the Federal government of the United States for a military installation, with the stipulation that the city would get the land back when the government no longer needed it. This land became Bergstrom Air Force Base. Del Valle Airfield was activated on September 19, 1942, on 3,000 acres (12 km2) leased from the City of Austin. The name of the base was changed to Bergstrom Army Airfield (AAF) in March 1943, in honor of Captain John August Earl Bergstrom, a reservist in the 19th Bombardment Group, who was killed at Clark Field, Philippines in 1941. He was the first Austinite killed in World War II. With the separation of the United States Air Force and United States Army in September 1947, the name again changed to Bergstrom Air Force Base. It would have this name until it was decommissioned in the early 1990s, with all military aviation ceasing in 1995, after more than 50 years. [3]

As Austin was quickly outgrowing the old Robert Mueller Municipal Airport, [6] the city began considering options for a new airport as early as 1971, when the Federal Aviation Administration proposed that Austin and San Antonio build a joint regional airport. That idea was rejected, as few Austinites supported driving halfway to San Antonio on Interstate 35 to catch a flight. Afterwards, the city submitted a proposal to the United States Air Force for joint use of Bergstrom Air Force Base in 1976. The Air Force rejected the proposal in 1978 as being too disruptive to its operations.

In the 1980s, neighborhoods around Mueller applied enough political pressure to force the city council to choose a site for a new airport from locations under consideration. In November 1987, voters approved a referendum designating a site near Manor. The city began acquiring the land, but faced lawsuits from the Sierra Club and others concerned about the Manor location and its potential environmental impact. [7]

The plans to construct a new airport at the Manor location were abandoned in 1991 when the Base Realignment and Closure Commission selected Bergstrom AFB for closure, and gave the nod to the city for the land and runways to be converted for use as a civilian airport. The USAF also agreed not to demolish the existing facilities, including the nearly-pristine main runway. The city council decided to abandon the original plan to build the new airport near Manor, and resolved instead to move the airport to the Bergstrom site. The City of Austin hired John Almond—a civil engineer who had recently led the airport design team for the new airport expansion in San Jose, California—as Project Director for the new $585 million airport in Austin and to put together a team of engineers and contractors to accomplish the task. [8] The issue of a $400 million bond referendum for a new airport owned and operated by the city was put to a public vote in May 1993 with a campaign managed by local public affairs consultant Don Martin and then-Mayor Bruce Todd and was approved by 63% of the vote. Groundbreaking for the new airport began in November 1994. [9] 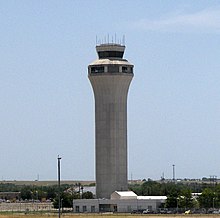 On October 23, 1995, with a $10 million budget [10] [11] and after the old tower, previously used by the US Air Force, "was demolished", [12] construction began on building Austin's tallest primary building (277 ft (84 m)) that houses air traffic controllers. Being completed a year before the current president Bill Clinton arrived with his entourage, enabling Air Force One to be granted clearance to land, thus making the president "the first passenger" to arrive. The tower when completed is behind Dallas and Houston as the tallest tower in the state. [10]

Bergstom AFB's main runway, 17R/35L, was kept intact along with most of its taxiways, as its high weight rating and long length would facilitate eventual service by large long-range airliners while reducing construction costs. Bergstom's original secondary runway, 17L/35R, was closed and partially demolished to allow new sections of taxiway to directly connect the main runway to the terminal complex. A replacement 9,000-foot 17L/35R was built to the east of the terminal site, along with a general aviation complex to the inside of its southern half. Most of the existing military buildings including the original control tower were demolished and cleared to make way for the new terminal and substantial parking facilities, though a hangar complex and parking tarmac to the south was retained, along with a section of tarmac to the northeast of the primary runway which became the foundation for ABIA's freight terminal. A few other existing jet bridges were converted to access roads for ground vehicles, while the family housing area to the northwest would be leveled but some of the roads kept for a Texas Department of Transportation service facility. Several Travis County facilities near the airfield, including the county correctional facility and sheriff's training academy, were unaffected by the conversion project.

Bergstrom had the designator BSM until Mueller's final closure in 1999, when it took Mueller's IATA code of AUS. [8] Initial issues with flight scheduling and routing led to proposed plans to keep Mueller operating in parallel with Bergstrom for a few weeks, but residents near Mueller blocked such efforts by appealing to the FAA, who refused to delay the transfer of the AUS LID or to issue a new airport code for Mueller. Austin–Bergstrom opened to the public on May 23, 1999.

Austin–Bergstrom International Airport opened to the public on May 23, 1999, with a 12,250 feet (3,730 m) runway, among the nation's longest commercial runways. The Barbara Jordan passenger terminal was originally conceived as an 18-gate terminal facility with a footprint of a bit more than 500,000 square feet (46,000 m2). However, ABIA was expanded during construction to have 24 contact gates with jet bridges (named Gate 2-Gate 25) and one gate without a jet bridge (named Gate 1) for a total footprint of 660,000 sqft. [13]

The opening of the airport coincided with a considerable number of nonstop flights being operated into Austin from the Dallas–Fort Worth metroplex, as American Airlines had decided to compete with Southwest Airlines' scheduled service between Dallas Love Field (DAL) and Austin in addition to American and Delta Air Lines service between Dallas–Fort Worth International Airport (DFW) and AUS. [14] At the time, there were 42 nonstop flights every weekday being operated with mainline jet aircraft from the two primary airports located in the Dallas/Fort Worth metroplex to Austin. By contrast, this same OAG lists a combined total of 24 nonstop flights every weekday at this time from the two primary airports serving the Houston area, Hobby Airport (HOU) and Intercontinental Airport (IAH), to Austin. [15]

As the population and economic importance of Austin has grown in recent years, airlines have been introducing new nonstop flights to the airport instead of routing passengers through existing hubs in Dallas and Houston, causing dramatic growth in both passenger numbers and nonstop service at Austin–Bergstrom. [16]

The terminal's first expansion project was completed in the summer of 2015. It added an enlarged customs and immigration facility on the arrivals level capable of processing more than 600 passengers per hour, two domestic baggage claim belts, and an enlarged security checkpoint on the ticketing level. [17] In 2019, a $350 million addition to the east side of the terminal added nine new gates, increasing the total number of gates from 25 to 34. [18] These gates are spaced farther apart, to accommodate additional flights operated by larger aircraft. and Gates 1+3 and Gates 2+4 are able to act independently of each other when accommodating narrow body aircraft, or as one gate's Door A and Door B in a dual jetbridge configuration when larger, wide-body aircraft arrive providing boarding options. The number of flexible-use gates that can accommodate both international and domestic flights increased from two to six. [19]

The airport's first scheduled transatlantic service, to London–Heathrow, was inaugurated by British Airways in March 2014. [20]

The passenger concourse at the Barbara Jordan Terminal

The Barbara Jordan Terminal is the airport's main terminal and has a total of 34 gates, six of which are capable of handling international flights. [21] There are several restaurants and food concessions inside the terminal, all but two of which are located inside the secured gate areas of the terminal. [22] The terminal also has a live music stage on which local bands perform in keeping with the spirit of Austin's proclamation as "The Live Music Capital of the World."

A secondary terminal known as the South Terminal is used by ultra low-cost carriers Allegiant Air and Frontier Airlines. [21] The South Terminal is accessed from a separate entrance on the south side of the airport perimeter from Burleson Road; it cannot be accessed from either the main airport entrance from SH 71 or the Barbara Jordan terminal except by completely exiting the airport grounds. A shuttle runs between the two terminals. The facility has a retro look and three passenger gates without airbridges; passengers walk under a covered walkway to board the aircraft by stairs.

Route 20, operated by the Capital Metropolitan Transportation Authority, operates from the arrivals level every 15 minutes. The route takes passengers through the East Riverside Corridor to Downtown and UT-Austin before heading east along Manor Road. [24]

Through the Project Connect plan, [25] the airport is planned be the southern terminus of the Capital Metropolitan Transportation Authority Blue Line light rail, which will run through the East Riverside Corridor to Downtown Austin and The University of Texas at Austin as far north as North Lamar/US183. Blue Line construction costs are estimated at $1.3 billion [26] and may be completed as early as 2029. [27] The project (Proposition A [28]) was approved by voters on November 3, 2020. [29]

In the coming years, AUS will be undergoing a major expansion with the goal of supporting 31 million passengers by 2040 (vs 11 million when opened in 1999). [30] To accommodate this growth, AUS will optimize the current Barbara Jordan Terminal while building out a new midfield concourse. [31] Additionally, two new taxiways will be constructed to accommodate the resulting increase in aircraft movements. The AUS 2040 Master Plan was finalized in 2019, however work was halted due to the COVID-19 pandemic and a new plan was launched in July 2021, which adapted the 2040 Master Plan to account for the effects of the pandemic. [32] [33]

In order to accommodate passenger growth in the short term, AUS is planning on opening bussing gates, new ticket counters, and new security checkpoints. In late 2021, AUS is planning to open three remote gate positions accessed via bussing from gate 13. This would be a short term solution to capacity needs during peak hours as the airport looks to create a more developed busing facility near gate 11 with six hardstand positions (completion estimated mid-2023). [34] Both these developments would exist on the east side of the terminal. AUS is also planning to expand the west side of the terminal. This project is not targeted for completion until late-2024, but will include a terminal expansion with three new gates. This would either be a full concourse expansion (which would include jetbridges for all the new gates) or a slightly smaller expansion that would have passengers board via ramps. Additional improvements include a new security checkpoint (targeted opening early-2022), additional ticket counters (early-2023), and a modernization of the airport's baggage handling system (late-2023).

For capacity needs in the longer term, AUS is looking to construct a brand new midfield concourse, dubbed "Concourse B". Initially, the concourse would be constructed with ten new gates and be connected to the Barbara Jordan Terminal via an underground pedestrian tunnel. In order to construct the new concourse, the existing South Terminal will need to be closed and Allegiant and Frontier relocated to the Barbara Jordan Terminal. In the future, Concourse B could be expanded to a total of 32 gates to accommodate future growth. [35]

Listen to this article (11 minutes)