From Wikipedia, the free encyclopedia
Genus of flowering plants in the daisy family Asteraceae

Aster is a genus of perennial flowering plants in the family Asteraceae. Its circumscription has been narrowed, and it now encompasses around 180 species, all but one of which are restricted to Eurasia; many species formerly in Aster are now in other genera of the tribe Astereae. Aster amellus is the type species of the genus and the family Asteraceae. [1]

The name Aster comes from the Ancient Greek word ἀστήρ (astḗr), meaning "star", referring to the shape of the flower head. Many species and a variety of hybrids and varieties are popular as garden plants because of their attractive and colourful flowers. Aster species are used as food plants by the larvae of a number of Lepidoptera species—see list of Lepidoptera that feed on Aster. Asters can grow in all hardiness zones. 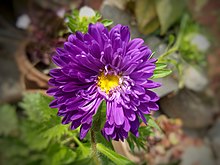 The genus Aster once contained nearly 600 species in Eurasia and North America, but after morphologic and molecular research on the genus during the 1990s, it was decided that the North American species are better treated in a series of other related genera. After this split there are roughly 180 species within the genus, all but one being confined to Eurasia. [3]

The New World species have now been reclassified in the genera Almutaster, Canadanthus, Doellingeria, Eucephalus, Eurybia, Ionactis, Oligoneuron, Oreostemma, Sericocarpus and Symphyotrichum, though all are treated within the same tribe, Astereae. Regardless of the taxonomic change, most are still widely referred to as "asters", or " Michaelmas daisies", because of their typical blooming period. See the List of Aster synonyms for more information.

Some common species that have now been moved are:

The "China aster" is in the related genus Callistephus. 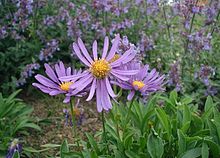 Aster alpinus is the only species of Aster ( sensu stricto) that is native to North America; it is found in mountains across the Northern Hemisphere.

In the United Kingdom, there is only one native member of the genus, Aster tripolium, the sea aster. The species formerly known as Aster linosyris (Goldilocks) is now Galatella linosyris. Aster alpinus subsp. vierhapperi is the only species native to North America. [2] Many species and a variety of hybrids and varieties are popular as garden plants because of their beautiful, attractive and colourful flowers. Aster species are used as food plants by the larvae of a number of Lepidoptera species—see list of Lepidoptera that feed on Aster. Asters can grow in all hardiness zones.

Some common species are:

Those marked agm have gained the Royal Horticultural Society's Award of Garden Merit.

The Hungarian revolution of 31 October 1918, became known as the " Aster Revolution" due to protesters in Budapest wearing this flower. [11]