From Wikipedia, the free encyclopedia
Belgian violinist (1921–1986)
"Grumiaux" redirects here. For others with the surname, see Grumiaux (surname).
Musical artist

Baron Arthur Grumiaux (French:  [gʁy'mjo]; 21 March 1921 – 16 October 1986) was a Belgian violinist, considered by some to have been "one of the few truly great violin virtuosi of the twentieth century". [1] He has been noted for having a "consistently beautiful tone and flawless intonation". [2] English music critic and broadcaster, Edward Greenfield wrote of him that he was "a master virtuoso who consistently refused to make a show of his technical prowess". [2]

Born to a working-class family in the Belgian town of Villers-Perwin, on 21 March 1921, [3] Grumiaux was only three years old when his grandfather urged him to begin music studies. He entered the conservatoire in Charleroi at the age of six; the normal entry age was eleven. He studied violin and piano there until the age of eleven, when he graduated and moved to the Royal Conservatoire in Brussels to study violin. [4] 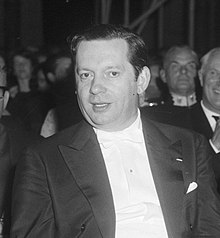 He variously has been described as having made his debut in Brussels at the age of 14, [4] or in 1935, [3] although his debut is more commonly said to have occurred in 1940. [5] [6] [7] This performance was made in Belgium with the Brussels Philharmonic playing Mendelssohn's Violin Concerto. [6]

Due to the German invasion of his homeland, he next played publicly after liberation in 1945 with the Allied military entertainment organisation, [8] [9] making his London debut later that year. [5] [6] In 1949 he was appointed professor of violin at the Brussels Conservatoire where he had once studied. [5] [10] He debuted in the United States in Boston in 1951, and toured the United States in the following year. [8] [11]

In 1973 he was created a baron by King Baudouin of Belgium for his services to music. [10]

A recording of Grumiaux's performance of one movement from Bach's Sonatas & Partitas for Unaccompanied Violin, the "Gavotte en rondeaux" from the Partita No. 3, is included on the Voyager Golden Record, attached to the Voyager spacecraft, as a sample of the culture of Earth. [14] This recording was chosen by renowned scientist Carl Sagan. 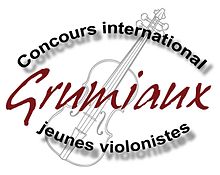 Logo of the competition