From Wikipedia, the free encyclopedia
Area codes for Manhattan 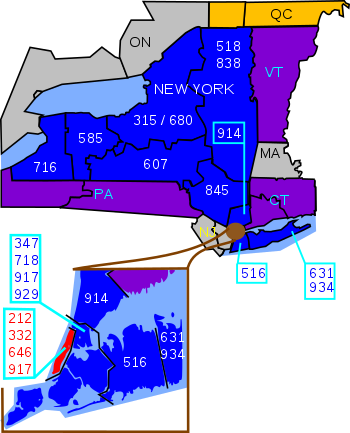 Area code 212 is one of the original 86 area codes assigned by AT&T in 1947, originally serving all five boroughs of New York City. For the next 37 years, New York City was one of the largest toll-free calling zones in North America.

On February 1, 1984, in response to a request from New York Telephone, the New York Public Service Commission voted to create a second area code for New York City. The split was implemented in a way that divided the city's three million telephone numbers roughly in half. Brooklyn, Queens and Staten Island received the new area code 718, while Manhattan and the Bronx kept 212. Amid protests from local officials and state lawmakers, the commission was persuaded by New York Telephone's reasoning that a new area code was needed to "prevent an impending exhaustion of telephone numbers." [2] [3]

New York Telephone made some 718 telephone numbers operational several days in advance. [4] Despite state lawmakers for the outer boroughs threatening legislation to stop the division, [3] 718 began its split as scheduled on September 1, 1984. [2] Permissive dialing of 212 continued across New York City, during which either 212 or 718 could be used, until January 1, 1985, when the use of 718 became mandatory for the boroughs affected. [2]

On July 1, 1992, the 718 territory was expanded to include the Bronx and the Marble Hill neighborhood of Manhattan (see below), while the rest of Manhattan remained in 212. Permissive dialing of 212 continued across the Bronx until May 16, 1993, during which either 212 or 718 could be used; after that date, 718 had to be used for telephone calls to the Bronx from everywhere outside the borough except the three boroughs that originally had the 718 code, and Bronx residents telephoning Manhattan had to dial 212. [5] On September 25, 1993, callers from the Bronx no longer had to dial 718 to reach Brooklyn, Queens and Staten Island. [6]

In 1992, the entire city was overlaid with area code 917, which had originally been planned for only the Bronx and mobile service. [7]

With available 917 mobile numbers becoming scarce, area code 646 was implemented on July 1, 1999, as an overlay for Manhattan. [8] 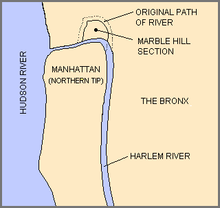 Marble Hill, a neighborhood of the borough of Manhattan, is located adjacent to the Bronx.

The Manhattan neighborhood of Marble Hill is located in the 718/347/929 numbering plan area (NPA), rather than the Manhattan NPA.

When the Bronx was reassigned with area code 718 in 1992, Marble Hill residents fought unsuccessfully to retain 212. Marble Hill's trunks are wired into the Bronx wire center, as it would have been too expensive for New York Telephone to rewire them.

A business with a 212 area code is often perceived as having the prestige of Manhattan and the convenience of stability, [16] [17] particularly if a number has been in service for several decades. One example is PEnnsylvania 6-5000 (currently 212-736-5000), the number for the Hotel Pennsylvania in Midtown. The hotel claims that it is the oldest telephone number used continuously in New York City. This claim is disputed, but PEnnsylvania 6-5000 did appear in a 1940 Glenn Miller Orchestra song title.

During August 2010, AT&T reported that there are no new numbers available in the 212 area code. [21] Several years before then, new landlines in Manhattan started to be assigned numbers in 917 (or 646). In addition, the Inwood section in far northern Manhattan is overlaid with area code 347, which also began as a cellphone area code. [22] Those who now get a 212 area code must rely on luck of the draw when they establish their service or use websites where they can purchase a telephone number with the area code which they can port to their landline or cellphone service. [15]