Arakawa (荒川区, Arakawa-ku) is a special ward located in Tokyo Metropolis, Japan. The ward takes its name from the river, the Arakawa, though the Arakawa River does not run through or touch the ward. Its neighbors are the wards of Adachi, Kita, Bunkyo, Taito and Sumida. In English, the ward calls itself Arakawa City.

Arakawa is in the northeastern part of Tokyo. The shape is long and narrow, stretching from west to east. The Sumida River forms the northern boundary.

The ward is surrounded by five other special wards. To the north lies Adachi; to the west, Kita; to the southwest, Bunkyo. South of Arakawa is Taito, and southeast is Sumida.

The area was mainly agricultural in the Edo period. In 1651, Kozukappara, the Tokugawa's largest execution ground (now located next to Minami-Senju station), was built. Beginning in the Meiji era, the area became industrial as factories were built on the water front. 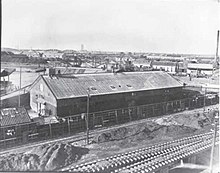 Tokyo #10-B Prisoner of War Camp

On 1 July 1944, during World War II, the Imperial Japanese Army established a Prisoner of War camp named #20-B, on the grounds nearby Hashiba Bridge, Minami-Senju, Arakawa, at the current day location with the address of 3-41 Minami-Senju, Arakawa. The camp was renamed to #10-B, in August 1945. [2] [3] The prisoners of the camp were liberated in September 1945. [4] At the time, there were 256 prisoners of war (87 British, 64 American, 55 Canadian and 50 Dutch) held at the camp. Two prisoners of war died during their imprisonment. [5]

MIAT Mongolian Airlines's Tokyo Branch Office is on the fifth floor in the Tachibana Building in Arakawa. [6] Iseki, a tractor and engine equipment manufacturer has its Tokyo head office in the ward. [7]

Public elementary and middle schools are operated by the Arakawa City Board of Education.

The Tokyo First Korean Elementary and Junior High School ( 東京朝鮮第一初中級学校), a North Korean school, is in the ward. [10]

The metropolis operated the Tokyo Metropolitan College of Aeronautical Engineering [11] [12] in Arakawa until 2010. 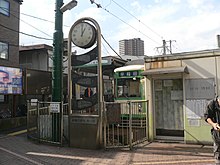 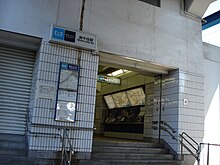 Additional facilities are under construction.