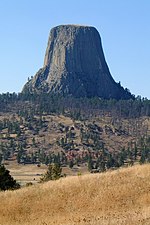 The Antiquities Act of 1906 ( Pub.L.  59–209, 34  Stat.  225, 54 U.S.C.  §§ 320301– 320303), is an act that was passed by the United States Congress and signed into law by Theodore Roosevelt on June 8, 1906. This law gives the President of the United States the authority to, by presidential proclamation, create national monuments from federal lands to protect significant natural, cultural, or scientific features. The Act has been used more than a hundred times since its passage.

The Antiquities Act was signed into law by President Theodore Roosevelt during his second term in office. The act resulted from concerns about protecting mostly prehistoric Native American ruins and artifacts -- collectively termed " antiquities" -- on federal lands in the West, such as at Chaco Canyon, New Mexico. Removal of artifacts from these lands by private collectors, "pot hunters," had become a serious problem by the end of the 19th century. In 1902, Iowa Congressman John F. Lacey, who chaired the House Committee on the Public Lands, traveled to the Southwest with the rising anthropologist Edgar Lee Hewett, to see for himself the extent of the pot hunters' impact. His findings, supported by an exhaustive report by Hewett to Congress detailing the archaeological resources of the region, provided the necessary impetus for the passage of the legislation. [1]

Since the Antiquities Act became law, all but four presidents, Richard Nixon, Gerald Ford, Ronald Reagan, and George H.W. Bush, have chosen to enlarge or dedicate new national monuments. [2] President Obama established more monuments than any President before him, with 26. [3] The previous record was held by President Theodore Roosevelt with 18 monuments. [4]

The Act was intended to allow the President to set aside certain valuable public natural areas as park and conservation land. The 1906 act stated that it was intended for: "... the protection of objects of historic and scientific interest." These areas are given the title of " National Monuments." It also allows the President to reserve or accept private lands for that purpose. The aim is to protect all historic and prehistoric sites on United States federal lands and to prohibit excavation or destruction of these antiquities. With this act, this can be done much more quickly than going through the Congressional process of creating a National Park. The Act states that areas of the monuments are to be confined to the smallest area compatible with the proper care and management of the objects to be protected.

The United States Supreme Court has repeatedly upheld presidential proclamations under the Antiquities Act, ruling each time that the Act gives the president nearly-unfettered discretion as to the nature of the object to be protected and the size of the area reserved. [6] [7]

For any excavation, the Act requires that a permit (Antiquities Permit) be obtained from the Secretary of the department which has jurisdiction over those lands.

Presidential powers under the Act have been reduced twice. The first time followed the unpopular proclamation of Jackson Hole National Monument in 1943. The 1950 law that incorporated Jackson Hole into an enlarged Grand Teton National Park also amended the Antiquities Act, requiring Congressional consent for any future creation or enlargement of National Monuments in Wyoming. [11] The second time followed Jimmy Carter's use of the Act to create 56 million acres (230,000 km2) of National Monuments in Alaska. The Alaska National Interest Lands Conservation Act requires Congressional ratification of the use of the Antiquities Act in Alaska for withdrawals of greater than 5,000 acres (20 km2). [12] Under the Trump administration, all monuments dedicated after the year 1996 have been called into question. Although some Presidents have chosen to ignore the tradition of preservation of notable environmental or historic areas, no President to date has entirely undone a predecessor's monument. [13] However, Donald Trump significantly reduced the size of Grand Staircase–Escalante National Monument and Bears Ears National Monument in Utah; the legality of these actions is pending in federal court. [13]

Several Supreme Court case have upheld the president's ability to proclaim large areas under the Act. [14]