From Wikipedia, the free encyclopedia
Baptist denomination in the United States
Not to be confused with American Baptist Association.

The American Baptist Churches USA (ABCUSA) is a mainline Baptist Christian denomination within the United States. The denomination maintains headquarters in Valley Forge, Pennsylvania. The organization is usually considered mainline, although varying theological and mission emphases may be found among its congregations, including modernist, charismatic and evangelical orientations. [1] It traces its history to the First Baptist Church in America (1638) and the Baptist congregational associations which organized the Triennial Convention in 1814. From 1907 to 1950, it was known as the Northern Baptist Convention, and from 1950 to 1972 as the American Baptist Convention.

American Baptist Churches USA have their origins in the First Baptist Church in Providence, Rhode Island, now the First Baptist Church in America, founded in 1638 by the minister Roger Williams. [2] [3] Regarded by the more dogmatic Puritans of the Massachusetts Bay Colony as a heretic for his religious separatism, Williams was banished into the New England wilderness where he and his followers created the settlement of Providence and later, the colony of Rhode Island. Williams is credited with being the founder of the Baptist movement in America, the founder of the state of Rhode Island, and the first highly visible public leader in America to call for the separation of church and state. 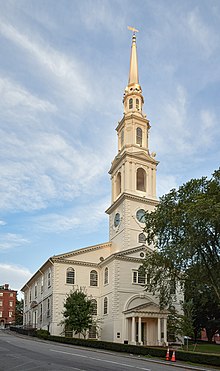 The First Baptist Church in America was formed in 1638 in Providence, R.I.

In 1845, a majority of Baptists in the South withdrew support from the Triennial Convention – largely in response to the decision of its delegates to ban slave holders from becoming ordained missionaries – and formed the Southern Baptist Convention (SBC). The Triennial Convention was loosely structured, and the SBC offered Baptists a more centralized organizational structure for carrying on missionary and benevolent work. In contrast, however, the Triennial Convention afforded local churches a higher degree of local autonomy, a more traditional characteristic of Baptist polity. The majority of churches in the North continued to work through these separate cooperating societies for missions and benevolence. The societies were united under the umbrella of a unified convention in 1907.

The Northern Baptist Convention was founded in Washington, D.C. on May 17, 1907. [5] Charles Evans Hughes, then Governor of New York and later Chief Justice of the United States, served the body as its first president. The purpose of the Northern Baptist Convention was to bring about a consistent cooperation among the separate Baptist bodies then existing. It was the first step in bringing together Baptists in the North "with ties to the historic American Baptist mission societies in the nineteenth century." [6] These had contributed to establishing many schools for freedmen in the South after the American Civil War, as well as working on issues of health and welfare. Many of their missionaries and members had worked as teachers in the South. In 1911, most of the churches of the Free Will Baptist General Conference merged with it. 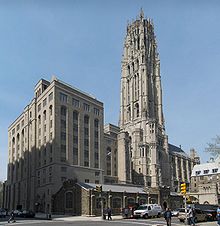 The name of the Convention was changed in 1950 to the American Baptist Convention (ABC), and it operated under this name until 1972. [7] It was the second step at bringing together on a national level Baptists with ties to the mission societies. The ABC was characterized from 1950–66 with annual resolutions at its conventions having to do with the Civil Rights Movement and race relations.

Without exception, these resolutions were progressive and genuinely encompassing. They addressed both the need for individual change in attitude and action, and the need for broader social change that could only be instituted through political action. [6]

As in many cases, the rhetoric of the annual conventions was sometimes ahead of local activity, but the denomination gradually made progress. In 1964, it created the Baptist Action for Racial Brotherhood (BARB), which early the next year produced a pamphlet outlining actions for change in local churches. In 1968, the national convention was challenged by "Black American Baptist Churchmen Speak To the American Baptist Convention," demands that challenged how the denomination had "conducted its business relative to black American Baptists." [6] The black churchmen said the Convention had excluded them from decisionmaking positions, even while working with good intentions on behalf of black American Baptists. The following year, Dr. Thomas Kilgore Jr., pastor of the Second Baptist Church of Los Angeles, was elected the first black president of the Convention. The 1968 Convention also voted to create the Study Commission on Denominational Structure (SCODS). Its recommendations changed the denomination in a variety of ways, after being adopted at the 1972 Convention. [6]

To reflect its new structure, the Convention in 1972 changed its name to the American Baptist Churches USA. [7] Rather than relying on decisionmaking at the annual Convention by whichever churches happened to send delegates, the SCODS restructuring resulted in the following:

American Baptists shares same theological beliefs with Protestant churches which believe that the Bible is the inspired word of God and the final authority in matters of faith. [8] The ABCUSA affirms the Trinity, that the one God exists as three persons in complete unity: God the Father, God the Son, and God the Holy Spirit. They confess Jesus Christ as Savior and Lord through whom those who believe can have fellowship with God. He died, taking on the sins of the world, and was resurrected, triumphing over sin and death. [9]

ABCUSA churches recognize two ordinances: Believer's baptism and the Lord's Supper. Baptism is by immersion, and those being baptized must be of an age to understand its significance. Believing in the priesthood of all believers, the ABCUSA avoids using creeds, affirming the freedom of individual Christians and local churches to interpret scripture as the Holy Spirit leads them. The ABCUSA affirms the ordination of women. [9]

The LGBTQ controversy in the ABCUSA

The LGBTQ issue has been a point of contention in the ABCUSA since the 1987 Biennial Meeting. [10] In 1992, the General Board adopted a resolution that stated, “We affirm that the practice of homosexuality is incompatible with Christian teaching.”

At least seven regions in the ABCUSA - Evergreen, Wisconsin, Rochester-Genesee, Metro Chicago, Metropolitan New York, Massachusetts, and Philadelphia - support full inclusion of LGBTQ persons into Baptist life. [11] Many ABCUSA churches have also partnered with the Association of Welcoming and Affirming Baptists, which was formed at the 1993 Biennial Meeting.

However, several other ABCUSA regions and churches have opposed affirmation of homosexuality, bisexuality, and transgenderism. In 2004, the ABC Central Region reaffirmed the 1992 resolution. [12] At its 2005 annual meeting, the West Virginia Baptist Convention, which had a history of proposing resolutions rejecting the LGBTQ lifestyle, [13] narrowly rejected a proposal to withdraw from the ABCUSA over its refusal to discipline those regions that have supported LGBTQ-friendly policies. [14] The Indiana-Kentucky region has also proposed a change in the denomination’s bylaws that will not allow churches to transfer to another region when removed over the issue of homosexuality. [15]

In 2006, the American Baptist Churches of the Pacific Southwest, believing that "the practice of homosexuality is incompatible with Christian teaching," split from the ABCUSA. The region was renamed Transformation Ministries. [16]

Each local congregation is autonomous and permitted to perform same-sex marriages if they opt to do so. [17] For example, Calvary Baptist Church in D.C., affiliated with the ABCUSA, performs same-sex marriages. [18] In 2013, an ABCUSA congregation in Washington D.C., ordained the denomination's first openly transgender pastor. [19]

The ABCUSA is consistent in its approach and allows each congregation to determine whether or not to perform same-sex marriages or ordain LGBT clergy. [20] The ABCUSA General Board voted in 2005 to amend the statement "We Are American Baptists" to define marriage as "between one man and one woman" and declare that "the practice of homosexuality is incompatible with Biblical teaching." [20] However, the denomination never officially adopted the board's statement and also stated that it will "respect and will continue to respect congregational freedom on this issue". [21]

The American Baptists Churches USA has a congregationalist polity emphasizing local church autonomy. Local churches are organized into 33 regions. The General Board makes policy for the denomination's national agencies. [22] However, General Board resolutions are not binding on local congregations. Three-fourths of the representatives to the General Board are nominated and elected by the regions. One-fourth of the representatives are nominated by the Nominating Committee and are elected by the regions. The General Secretary executes the policies and decisions of the General Board. Rev. Dr. Lee B. Spitzer was called as ABCUSA General Secretary on May 8, 2017. [23]

The ABCUSA consists of 33 regional associations and conventions: