Alachua County is included in the Gainesville Metropolitan Statistical Area. The county is known for its diverse culture, local music, and artisans. Much of its economy revolves around the university, which had nearly 55,000 students in fall 2016.

The first people known to have entered the area of Alachua County were Paleo-Indians, who left artifacts in the Santa Fe River basin prior to 8000 BCE. Artifacts from the Archaic period (8000 - 2000 BCE) have been found at several sites in Alachua County. Permanent settlements appeared in what is now Alachua County around 100 CE, as people of the wide-ranging Deptford culture developed the local Cades Pond culture. The Cades Pond culture gave way to the Alachua culture around 600 CE. [3]

The Timucua-speaking Potano tribe lived in the Alachua culture area in the 16th century, when the Spanish entered Florida. The Potano were incorporated by the colonists in the Spanish mission system, but new infectious diseases, rebellion, and raids by tribes backed by the English led to severe population declines. What is now Alachua County had lost much of its indigenous population by the early 18th century. [4]

In the 17th century Francisco Menéndez Márquez, Royal Treasurer for Spanish Florida, established the La Chua ranch on the northern side of what is now known as Payne's Prairie, on a bluff overlooking the Alachua Sink. [5] Chua may have been the Timucua language word for sinkhole. Lieutenant Diego Peña reported in 1716 that he passed by springs named Aquilachua, Usichua, Usiparachua, and Afanochua while traveling through what is now Suwannee County. In the twentieth-century, anthropologist J. Clarence Simpson assumed that the named springs were in fact sinkholes. [6] The Spanish later called the interior of Florida west of the St. Johns River Tierras de la Chua, which became "Alachua Country" in English. [7]

Around 1740 a band of Oconee people led by Ahaya, who was called "Cowkeeper" by the English, settled on what is now Payne's Prairie. [8] Ahaya's band became known as the Alachua Seminole. In 1774 botanist William Bartram visited Ahaya's town, Cuscowilla, near what Bartram called the Alachua Savanna. King Payne, who succeeded Ahaya as chief of the Alachua Seminole, established a new town known as Payne's Town.

In 1812, during the Patriot War of East Florida, an attempt by American adventurers to seize Spanish Florida, a force of more than 100 volunteers from Georgia led by Colonel Daniel Newnan ran into a band of Alachua Seminole led by King Payne near Newnans Lake. After several days of intermittent fighting, Colonel Newnan's force withdrew. King Payne was wounded in the fight and died two months later. The Alachua Seminole left Payne's Town and moved further west and south, but other bands of Seminole moved in. A second American expedition in 1813 of U. S. Army troops and militia from Tennessee, led by Lt. Colonel Thomas Adams Smith, found some Seminoles, killing about 20, and burned every Seminole village they could find in the area. [9] [10]

In 1814 a group of more than 100 American settlers moved to a point believed to be near the abandoned Payne's Town (near present-day Micanopy) and declared the establishment of the District of Elotchaway of the Republic of East Florida. The settlement collapsed a few months later after its leader, Colonel Buckner Harris, was killed by Seminole; the settlers returned to Georgia. [11]

In 1817 F. M. Arredondo received the 20-mile square Arredondo Grant in the southern part of what is Alachua County. By the time Florida was formally transferred from Spain to the United States, people from the United States and from Europe were settling in the area. Wanton's Store, near the site of the abandoned King Payne's Town, attracted settlers, primarily from Europe, who founded Micanopy. The 1823 Treaty of Moultrie Creek required the Seminole to move a reservation south of what is now Ocala, and the flow of settlers into the area increased. Many occupied former Seminole towns, such as Hogtown.

Alachua County was created by the Florida territorial legislature in 1824. The new county stretched from the border with Georgia south to Charlotte Harbor. The original county seat was Wanton's (the name Micanopy had not been adopted, yet). In 1828 the county seat was moved to Newnansville, located near the current site of the city of Alachua. [11]

In 1854, the new railroad from Fernandina to Cedar Key bypassed Newnansville, and Gainesville, a new town on the railroad, began to draw business and residents away from Newnansville. Gainesville was designated that year as the new county seat. [12]

During the post-Reconstruction period, white Democrats regained control of the state legislature and worked to restore white supremacy. Violence against blacks, including lynchings, rose in the late 19th and early 20th centuries as whites imposed Jim Crow and discriminatory laws, disenfranchising most blacks, which forced them out of the political system. Alachua County was the site of 21 documented lynchings between 1891 and 1926. [13] The first three documented lynchings, in Gainesville in 1891, involved two black men and a white man, who were associated with the notorious Harmon Murray. [14] Ten lynchings took place in Newberry, six of them in a mass lynching there in 1916. [13] These lynchings were conducted outside the justice system, by mobs or small groups working alone. Nineteen of the victims were black; two were white. [15] (A 2015 report by the Equal Justice Institute, based in Montgomery, Alabama, had identified 18 lynchings. [16] The Historical Commission documented three more, including two white men.) [15]

In September 2017, the County Commission approved plans to place markers with the names of the victims in the county. (See linked article for names of these individuals.) [15] They are working with the Historical Commission and cities to discuss how best to achieve this. [13] A state historical marker on the Newberry Lynchings was dedicated in 2019. 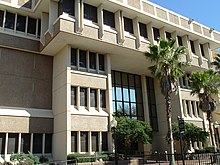 The entire county of Alachua is served by the Alachua County School District, which has some 47 different institutions in the county. Alachua county is also home to the University of Florida and Santa Fe College.

The Alachua County Library District is an independent special taxing district and the sole provider of public library service to approximately 250,000 citizens of Alachua County, Florida. This includes all of the incorporated municipalities in the county. It maintains a Headquarters Library and four other branches in Gainesville. These locations include the Millhopper Branch in northwest Gainesville, the Tower Road Branch in unincorporated Alachua county southwest of Gainesville, the Library Partnership Branch in northeast Gainesville, and the Cone Park Branch in east Gainesville. The district also operates branches in the Alachua County municipalities of Alachua, Archer, Hawthorne, High Springs, Micanopy, Newberry, and Waldo, as well as a branch at the Alachua County Jail. The district operates two bookmobiles which visit more than 25 locations in the county from two to five times a month. [26] [27] [28]

The Gainesville Public Library became a free library in 1918, supported by funds from city taxes from all residents, but it was available only to whites. The building was constructed with the aid of a Carnegie library grant. The library became a department of the City of Gainesville in 1949. It was not until 1953 and opening of the Carver Branch Library that African Americans in the city had access to a library, as public facilities were still segregated. The Carver Branch closed in 1969, after the main library had been desegregated.

In 1958, the City of Gainesville and Alachua County agreed to jointly operate the library for the whole county. Branch libraries were opened in High Springs, Hawthorne and Micanopy the next year, and a bookmobile was put into service. Alachua County joined with Bradford County to operate the Santa Fe Regional Library. After Bradford County withdrew from the Regional Library, the Alachua County Library District was formally established in 1986. The Millhopper and Tower Road branches opened in 1992, and the branches in Alachua, Archer, Newberry and Waldo were all opened by 1997. The Library Partnership Branch opened in 2009, and the Cone Park Branch in 2011. A new, permanent location for the Cone Park Branch Library was opened near the Eastside Community Center in Gainesville on December 14, 2013. [29] [30] [31]

As of March 31, 2021, the county had a strong Democratic plurality, with large Republican and independent minorities. [32]

Like many other counties containing large state universities, Alachua County regularly supports the Democratic Party. It has voted for the Democratic candidate for president in the past seven elections. The county last supported a Republican presidential candidate in 1988, when it narrowly went for George H. W. Bush.