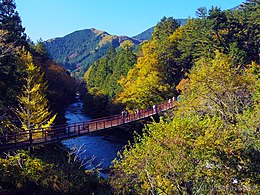 Akigawa River in the autumn

Because of its rich nature and calm surroundings compared to central Tokyo, and because of access to transportation, many tourists choose Akiruno for their vacation. Especially Seoto-no-yo Spa is famous for its high quality alkaline spring and is referred to as the “beautiful skin spa”. Also, Akiruno is one of the most popular place for BBQ, biking and hiking. One of the most famous trail running cups in Japan, The Hasetsune Cup, is held in Akiruno.

Akiruno has a Humid subtropical climate (Köppen Cfa) characterized by warm summers and cool winters with light to no snowfall. The average annual temperature in Akiruno is 13.2 °C. The average annual rainfall is 1998 mm with September as the wettest month. The temperatures are highest on average in August, at around 24.6 °C, and lowest in January, at around1.9 °C. [2] During the winter months, snowfall in the mountainous areas is almost daily. There is a difference in climate between the eastern part near the former Akigawa city and the western part near the former Itsukaichi town, and the temperature in the western part is generally lower than that in the eastern part.

Per Japanese census data, [3] the population of Akiruno increased slowly over the past century,

The area of present-day Akiruno was part of ancient Musashi Province. In the post- Meiji Restoration cadastral reform of July 22, 1878, the area became part of Nishitama District in Kanagawa Prefecture. The town of Itsukaichi was created on April 1, 1889, with the establishment of the modern municipalities system. Nishitama District was transferred to the administrative control of Tokyo Metropolis on April 1, 1893. Itsukaichi expanded through annexation of neighboring villages in 1918 and 1955. Higashiakiru, Nishiakiru, and Tasai grouped together on April 1, 1955, to form the town of Akigawa, which was elevated to city status on May 5, 1971. The city of Akiruno was created on September 1, 1995, by the merger of the city of Akigawa with the neighboring town of Itsukaichi.

Akiruno has a mayor-council form of government with a directly elected mayor and a unicameral city council of 21 members. Akiruno, collectively with the municipalities of Fussa, Hamura, Mizuho, Hinode, Hinohara and Okutama, contributes two members to the Tokyo Metropolitan Assembly. In terms of national politics, the city is part of Tokyo 25th district of the lower house of the Diet of Japan.