African immigration to the United States

From Wikipedia, the free encyclopedia
Individuals residing in the United States who were born in Africa
Not to be confused with American Descendants of Slavery.

African immigrants in the United States come from almost all regions in Africa and do not constitute a homogeneous group. They include peoples from different national, linguistic, ethnic, racial, cultural and social backgrounds. [3] As such, African immigrants are distinct from native-born African Americans, many of whose ancestors were involuntarily brought from West and Central Africa to the colonial United States by means of the historic Atlantic slave trade.

In the 1870s, the Naturalization Act was extended to allow "aliens, being free white persons and to aliens of African nativity and to persons of African descent" to acquire citizenship. Immigration from Africa was theoretically permitted, unlike non-white immigration from Asia.

Several laws enforcing national origins quotas on U.S. immigration were enacted between 1921 and 1924 and were in effect until they were repealed in 1965. While the laws were aimed at restricting the immigration of Jews and Catholics from Southern and Eastern Europe and immigration from Asia, they also impacted African immigrants. The legislation effectively excluded Africans from entering the country.

The Immigration and Nationality Act of 1965 (also known as the Hart-Celler Act) repealed the national quotas and subsequently there was a substantial increase in the number of immigrants from developing countries, particularly in Africa and Asia. This act also provided a separate category for refugees. The act also provided greater opportunity for family reunification.

The Diversity Visa Program, or green card lottery, is a program created by the Immigration Act of 1990. It allows people born in countries with low rates of immigration to the United States to obtain a lawful permanent resident status. Each year, 50,000 of those visas are distributed at random. Almost 38% of those visas were attributed to African born immigrants in 2016. [6] African born persons also represent the most numerous group among the applicants since 2013. [7] The application is free of charge, and the requirements in terms of education are either a high school diploma or two years of a professional experience requiring at least two years of training. 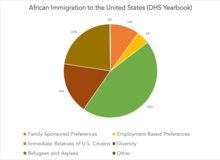 African immigration to the U.S. by broad class of admission

The continent of Africa has seen many changes in migrations patterns over the course of history. [8] The graph below shows African immigration to the United States in 2016 based on class of admission with numbers from the Department of Homeland Security's Yearbook. [9]

The influx of African immigrants began in the latter part of the 20th century and is often referred to as the "fourth great migration." About three-fourths of all out-migration from Africa went to the United States after 1990. [7] This trend began after decolonization, as many Africans moved to the U.S. seeking an education and to escape poverty, and has risen steadily over time. The increase in the rate of migration is projected to continue for the coming decades. [10] Originally, these immigrants came with the sole purpose of advancing themselves before returning to their respective countries. Nevertheless, many immigrants never return. In recent years there has been an increase in the number of African immigrants interested in gaining permanent residence in the U.S.; this has led to a severe brain drain on the economies of African countries due to many skilled hard-working Africans leaving Africa to seek their economic fortunes in the U.S. mainly and elsewhere.

Africans typically congregate in urban areas, moving to suburban areas over time. They are also one of the groups who are least likely to live in racially segregated areas. [23] [24] The goals of Africans vary tremendously. While some look to create new lives in the US, some plan on using the resources and skills gained to go back and help their countries of origin. Either way, African communities contribute millions to the economies of Africa through remittances. Ogbuagu (2013) found that Diasporic Nigerians across the globe reportedly remitted $21 billion (N3.36 trillion-Naira) to the homeland in 2012 alone.

Immigrants from Africa, once they arrive in the U.S., typically settle in heavily urban areas upon arrival. Areas such as Washington DC, New York, Baltimore, Philadelphia, Houston, Atlanta, Los Angeles, Boston, Columbus, and Minneapolis have heavy concentrations of African immigrant populations. Often there are clusters of nationalities within these cities. The longer African immigrants live in the United States, the more likely they are to live in suburban areas.

In the San Francisco Bay Area, there are officially 40,000 African immigrants, although it has been estimated that the population is actually four times this number when considering undocumented immigrants. The majority of these immigrants were born in Ethiopia, Egypt, Nigeria, and South Africa.

African immigrants like many other immigrant groups are likely to establish and find success in small businesses. Many Africans that have seen the social and economic stability that comes from ethnic enclaves such as Chinatowns have recently been establishing ethnic enclaves of their own at much higher rates to reap the benefits of such communities. [25] Such examples include Little Ethiopia in Los Angeles and Little Senegal in New York City.

Those born in Cape Verde (44.8 percent) and Mauritania (60.8 percent) were the least likely to report having completed a high school education. [38]

U.S. immigrants that come from predominantly black nations in Africa are generally healthier than black immigrants from predominantly white nations or from Europe. A study conducted by Jen'nan Ghazal Read, a sociology professor at the UC Irvine, and Michael O. Emerson, a sociology professor at Rice University, studied the health of more than 2,900 black immigrants from top regions of emigration: the West Indies, Africa, South America and Europe. Black people born in Africa and South America have been shown to be healthier than U.S.-born black people. [39] [40] The study was published in the September issue of Social Forces and is the first to look at the health of black immigrants by their region of origin. [41]

African immigrants tend to retain their culture once in the United States. Instead of abandoning their various traditions, they find ways to reproduce and reinvent themselves. [42] Cultural bonds are cultivated through shared ethnic or national affiliations. Some organizations like the Ghanaian group Fantse-Kuo and the Sudanese Association organize by country, region, or ethnic group. Other nonprofits like the Malawi Washington Association [43] organize by national identity, and are inclusive of all Malawians. Other groups present traditional culture from a pan-African perspective. Using traditional skills and knowledge, African-born entrepreneurs develop services for immigrants and the community at large. In the Washington area, events such as the annual Ethiopian soccer tournament, institutions such as the AME Church African Liberation Ministry, and "friends" and "sister cities" organizations bring together different communities. The extent to which African immigrants engage in these activities naturally varies according to the population.

The religious traditions of African immigrants tend to be pluralistic; they are seen not only as religious institutions, but in many cases also as civic centers. These organizations are central to persevering ethnic identity among these communities. [45][ citation needed] African immigrant religious communities are also central networks and provide services such as counseling, shelter, employment, financial assistance, health services, and real estate tips.

Many African communities have created their own churches in the United States modeled on continental African churches. Many African churches are Pan-African, but some consist only of nationals from the country of origin. This allows for worship in the native languages of the congregation.

Muslim immigrants from nations in Africa adhere to diverse Islamic traditions. These include various Sunni, Shia and Sufi mainstream orders and schools (madhhab) from West Africa, the Swahili Coast, the Indian Ocean islands, the Horn of Africa and North Africa.

Many local cable channels are now purchasing programming channels operated by various African communities. For example, the Africa Channel is broadcast in the United States through Comcast, Charter Communications, Cox Communications and also available in Jamaica, the Bahamas, Trinidad & Tobago, St. Lucia, Barbados, Bermuda, Grenada and other islands throughout the Caribbean. [46] The channel is a showcase for outstanding travel, lifestyle and cultural series, specials and documentaries. These programs feature people of African descent and their stories. The network's premiere on September 1, 2005, marked a milestone in U.S. television history. For the first time, American audiences were able to experience the successes, celebrations and challenges of people living throughout Africa and the Diaspora, all via a general entertainment network. The network is broadcast in the U.S. through national distribution deals with the largest cable MSOs in the country, including Comcast, Charter, and Cox. TV news services such as the Nigerian Television Authority, South African Broadcasting Channel and Ethiopian Television Programming are also available in some areas.

Immigrants from Africa have opened restaurants in urban areas. The DC, Atlanta and NYC Metro areas host many eateries belonging to the Liberian, Senegalese, Nigerian, Ethiopian, Tanzanian, South African and other communities.

The New York Times and academic scholar Nnamdi O. Madichie have credited American African artists Kelela and Akon for employing fluidity of their cultural heritage through their U.S. and African identities. Recently, academic scholars have brought attention to the influence of African American music on U.S. culture. According to ethnomusicologist Portia Maultsby, African immigrant artists have impacted the U.S. through fashion and mainstream music by utilizing their cultural heritage as a foundation for their artistry. In "Marketing Senegal through hip-hop-a discourse analysis of Akon's music and lyrics", Madichie cites Senegalese-American singer, Akon, as a first-generation African immigrant musician whose music and lyrics create a confluence of West Africa-styled vocals mixed with North America's East Coast and Southern beats. [47] In Mama Africa and Senegal, Akon builds connections between Diasporic communities and the "homeland" through his music. [47]

An examination of the role of Black American entrepreneurs in the hip-hop industry suggests that young Black people have been able to influence the White dominated music industry through transforming "Blackness into capital, staffing and business connections". [48] The New York Times article, "25 Songs That Tell Us Where Music Is Going" illustrates how African immigrants have used their heritage to influence a new sound of mainstream music in the U.S. [49] Wortham cites Kelela, an Ethiopian-American musician, as an American African immigrant who has impacted U.S. culture by defying the notion that Blackness is monolithic through music that pushes the boundaries of R&B in uninhibited experimentation. [49]

Ethnomusicologist Mellonee Burnim's area of aesthetic significance are style of delivery, sound quality, and mechanics of delivery-qualities common to African-derived music. [50] Style of delivery is one of the most important aspects of Africanisms in music. This refers to the stage presentation and physical appearance of when music is performed. [51] Physical appearance is a fundamental part of the Black cultural expression in regard to African-American music. The sways and sashays as well as the physical appearance of African immigrant musicians has a significant influence on U.S. culture exemplified through fashion trends. [51]

Along with style of delivery, sound quality is another significant tradition of Black music that derives from Africanisms. [52] The sound quality of African-American music distinguishes itself because of its African sentiments that are foreign to Western patterns. [51] Maultsby describes how in Africa and the black diaspora, black musicians have managed to cultivate an array of unique sounds that imitate nature, animals, spirits, and speech into their music. [50] Mechanics of delivery involves improvisation of time, text, and pitch to deliver Black audiences a variety in performances. [53]

Textures can be increased through solo voices or adding layers of handclaps. This technique described as "staggered entrances" derives from the improvised singing of slaves. [53] Time is another basic component that can be expanded by extending the length of notes. Finally, pitch produces juxtaposing voices of different ranges in a single voice. [50]

The following is a list of notable African nationals who have immigrated to and now at least partially reside in the US.

Abakar z. Zaid, decorated veteran of the U.S Marines, there are many others Africans serving in the 6 branches of the Armed Forces.