From Wikipedia, the free encyclopedia
(Redirected from 9 MetroTech Center) 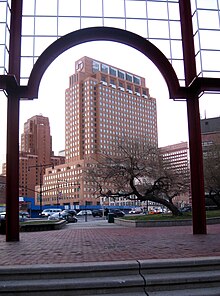 MetroTech Center lies between Flatbush Avenue Extension and Jay Street, north of the Fulton Street Mall and south of Tillary Street, close to Brooklyn's Civic Center ( Borough Hall and the courts) and Brooklyn Heights. The center is above the Jay Street–MetroTech station of the New York City Subway, served by the A, ​ C​, F, <F>​​, and R trains. [1] [2] 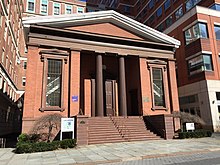 The 1980s and 1990s were a period of major large-scale development activity and renewal in Downtown Brooklyn. The MetroTech Center office complex was at the center of this revitalization and within walking distance of several other major development projects including Pierrepont Plaza, the Marriott at the Brooklyn Bridge, Atlantic Terminal Mall, and Renaissance Plaza. MetroTech was controversial when it was created because it involved the demolition of over 100 homes and 50 businesses. [3]

As part of an effort to resuscitate Downtown Brooklyn in the 1970s, George Bugliarello, a professor at Polytechnic Institute located in the area, had advanced an idea to create a center for research and development along the lines of the development then starting in Silicon Valley in California. About a decade later the American Institute of Aeronautics and Astronautics, like several other scientific and engineering organizations, was unsuccessfully seeking locations for expansion in Manhattan matching their needs and budget. When the AIAA chose to relocate to Washington D.C. due to lack of suitable space in New York, Bugliarello, who had by then become the President of Polytechnic, decided to try again to put his idea of a technology-centered development in Brooklyn into action. [4]

A few years later, New York City agreed to designate what had then become Polytechnic University as the main sponsor of the urban renewal project that would become MetroTech, under the condition that there would be at least two other tenants. The city and Polytechnic chose Forest City Enterprises as the project’s main developer based on its years of experience, commitment to stay in the area, and financial capacity. Forest City's co-founder Bruce Ratner and Brooklyn Borough President Howard Golden put together a public-private partnership and quickly redefined the MetroTech vision from a research and development park to a campus-centered back office complex.

As Forest City negotiated with Morgan Stanley, two other major corporate players were being wooed for the site: the Securities Industry Automation Corporation (SIAC) and Brooklyn Union Gas. The key to SIAC's decision to move to Metrotech was that the site was on a separate power grid from Manhattan's, which meant their operations would be safe if Manhattan experienced a power failure, as had happened in the New York City blackout of 1977. The move that sealed the decision to build the MetroTech vision begun by Bugliarello was convincing Chase Manhattan Bank to relocate its back office operations there.

MetroTech Center was formed in 1992 by making a 16-acre (65,000 m2) rectangle of downtown Brooklyn into a superblock (bounded by Jay Street, Johnson Street, Flatbush Avenue, and Myrtle Avenue), to allow the erection of new office buildings and parking garages. Dozens of older buildings had to be demolished in order to clear this space for the construction of the new center. The entire area was designated a pedestrian zone, and, as a consequence, the north ends of Lawrence and Duffield Streets were closed to automobile traffic.

From 2000 to 2016, the MetroTech complex generated more than $1 billion in new investment, representing more than five million square feet of new space. [5] In 2017, New York University announced that it would invest over $500 million in its Brooklyn Campus that mainly includes the NYU Tandon School of Engineering and Center for Urban Science and Progress. [6]

In 2019, Metrotech featured NYC based painter Annie Viuex as part of her /light wave collection . [7]