Construction originally began in 2010, but was delayed until 2014 because of a lack of an anchor tenant. The building's concrete core was topped out to maximum height in August 2016, with the perimeter steel structure following on October 6, 2016. The building opened on June 11, 2018. The building was designed by Rogers Stirk Harbour + Partners, and is managed by Silverstein Properties through a ground lease with the Port Authority of New York and New Jersey, the landowner. It is 1,079 ft (329 m) high, with 80 stories. As of 2021 [update], it is the Ninth-tallest building in the city. [6]

The Marriott World Trade Center was a 22-story [7] steel-framed hotel building with 825 rooms. It had a roof height of 73.7 m (242 ft) and was designed by Skidmore, Owings & Merrill. Its structural engineer was Leslie E. Robertson Associates with Tishman Construction serving as the main contractor. Construction began in 1979. It opened on July 1, 1981 as the Vista International Hotel and was located at the southwest corner of the World Trade Center. [8] It was heavily damaged in the 1993 World Trade Center bombing and was subsequently closed until repairs were completed the following year. Forty people died when the hotel was destroyed during the September 11 attacks. The hotel's remains were later dismantled to make way for construction of the National September 11 Memorial & Museum. [9]

3 World Trade Center was originally planned for a podium of seven stories for trading floors, with a 73-floor office tower rising from it. The diamond braces initially planned for the front and rear faces of the building have been dropped from the design and the tower is to be built without them. However, the diagonal bracing on the sides would remain. The four spires in the original design gave the tower a pinnacle height of 1,240 feet (378 m), meaning it would have become the third-tallest building in New York City by pinnacle height, [10] but the spires were later removed from the design, thus reducing the height by about 88 feet (approximately 26.8 m). [11] The total floor space of the building is planned to include 2,000,000 sq ft (190,000 m2) of office and retail space. The building's groundbreaking took place in January 2008, and at that time it was scheduled to be completed by 2014. [12] [13] Unusual for a high-rise, the building's concrete core would be built before the rest of the structure was completed. [14] The structural engineer for the building was WSP. [15] Pritzker Prize-winning architect Richard Rogers, of Rogers Stirk Harbour + Partners, was awarded the contract to design the building. [16]

On May 11, 2009, it was announced that the Port Authority of New York and New Jersey was seeking to reduce 175 Greenwich Street to a "stump" building of approximately four stories. [17] The overall plan, which also called for a similar reduction in height for 2 World Trade Center and the indefinite postponement of 5 World Trade Center, would halve the amount of office space available in the fully reconstructed World Trade Center to 5,000,000 sq ft (460,000 m2). The agency cited the recession and disagreements with developer Larry Silverstein as reasons for the proposed reduction. Silverstein opposed the plan, filing a notice of dispute on July 7, 2009. By doing so, the development firm began a two-week period during which renegotiated settlements and a binding arbitration regarding the construction of the four World Trade Center towers could be made. Silverstein Properties, which has paid the Port Authority over US$2.75 billion in financing, noted the organization's inability to meet construction obligations in its official complaint.

In November 2010, three PureCell fuel cells were delivered at the World Trade Center site which together will provide about 30% of the tower's power. [18] 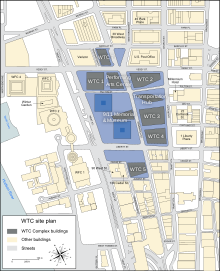 The tower portion of 3 World Trade Center was to be fully built after meeting the requirements. [21] A spokesperson speaking on the issue of rebuilding the site commented: "Three WTC should be up by 2015; although; we do have one milestone to hit: We need to get a 400,000-square-foot tenant in order to get a financing backstop that makes sure we will complete that building. So, that's a question mark, and it's a major priority of Silverstein Properties". [22] The Port Authority believes that the 2010 agreement will allow market demand to drive the construction of the towers and help to limit public investment since the Port Authority has other projects that need attention in the region.

By February 2012, the ground floor concrete was almost done and the lower podium had reached the 5th floor. On May 18, 2012 a construction update was released which stated that the superstructure work was continuing, and that forms, rebar, and concrete placement work was also continuing. Additionally, utilities for the site were being installed. The construction agency expected the lower podium to reach a capped height of 7 stories by September 2012. [23] In late June 2012, David Zalesne, president of Owen Steel, confirmed that construction of the tower would continue and that Owen Steel has been selected to provide the structural steel for the building. [24]

On October 2, 2012, the large advertising and media company GroupM was confirmed by several sources to be in the preliminary negotiations to anchor 3 World Trade Center in a deal that would allow construction to begin on the planned 80-story office tower. The lease would be about 550,000 square feet in size, a large enough commitment to qualify the project for up to $600 million in public benefits in the form of a mix of equity and loan guarantees from the city, the state, and the Port Authority. [25] In December 2013, GroupM was signed on as anchor tenant. [26] This allowed the tower to resume construction in late 2013. [27] In January 2014, Senator Chuck Schumer negotiated a $340 million round of financing through federal Recovery Zone bonds to finance the project's construction. [28] A subsidy, which would have doubled the loan given to the construction of 3 World Trade Center, was postponed by the Port Authority of New York and New Jersey in April 2014 until June 2014. [29] [30]

On June 25, 2014, the Port Authority of New York and New Jersey reached an agreement with Larry Silverstein to finance the completion of 3 World Trade Center, and construction of the tower resumed. The financing included the sale of $1.6 billion of tax-exempt bonds, the largest-ever unrated bond deal in the municipal bond market. Other sources of funding included $600 million in insurance proceeds, $210 million in cash contributions from the New York City and State governments, and $55 million in cash from Silverstein Properties itself. [28] Following the financing, the tower crane returned and a new anticipated completion of late 2017 was announced. [31]

On June 23, 2016, 3 World Trade Center's core was topped out. In a ceremony held at the base of the building, a 2-ton bucket of concrete was signed by workers, and executives, including developer Larry Silverstein, and was hoisted up with an American flag, which was also used with the topping out of 7 and 4 World Trade Center, to the top of the tower. [34] On the evening of August 11, 2016, a construction crane struck one of 3 World Trade Center's windows. There was a heavy wind gust at the time, [35] and construction workers were securing the crane when it veered into a 12th-story glass panel, cracking it. No one was injured. [36]