Local elections were held in Turkey on 29 March 2009. The overall winner was the ruling party Justice and Development Party, although the party saw a decline in its vote relative to the 2007 general election. The leading opposition party, the social democratic Kemalist CHP, increased its vote share, as did a number of smaller parties including the SP, DTP and BBP, whose party leader Muhsin Yazıcıoğlu had died in a helicopter crash four days before the election. The third largest party, the Turkish nationalist MHP, enjoyed a more modest vote surge. [1] The election was not contested by Cem Uzan's GP. [2] The AKP failed to take certain provinces it had publicly targeted, such as Diyarbakır, [3] İzmir and Urfa, [4] and did not achieve its goal of exceeding 47% of the overall vote. [5] There was localized election-related fighting in southeastern Turkey, in which five people were reported to have been killed and about a hundred injured. [5] 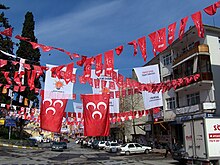 Flags of political parties before the Turkish municipal elections in Şile. The most visible ones are Nationalist Movement Party and Justice and Development Party) flags.