The United States census of 1980, conducted by the Census Bureau, determined the resident population of the United States to be 226,545,805, an increase of 11.4 percent over the 203,184,772 persons enumerated during the 1970 census. [1] It was the first census in which a state— California—recorded a population of 20 million people, as well as the first in which all states recorded populations of over 400,000.

The 1980 census collected the following information from all respondents: [2]

It was the first census not to ask for the name of the "head of household." [3]

Approximately 16 percent of households received a "long form" of the 1980 census, which contained over 100 questions. Full documentation on the 1980 census, including census forms and a procedural history, is available from the Integrated Public Use Microdata Series.

Microdata from the 1980 census are freely available through the Integrated Public Use Microdata Series. Aggregate data for small areas, together with electronic boundary files, can be downloaded from the National Historical Geographic Information System. Personally identifiable information will be available in 2052. [4] 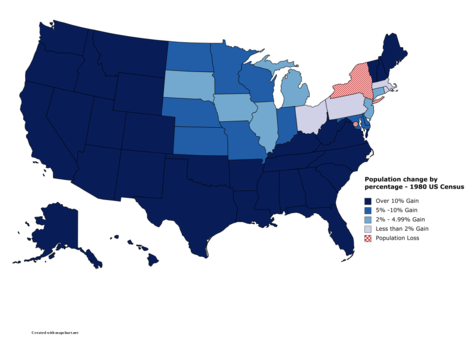