A number of new questions were asked including where people were five years before, highest educational grade achieved, and information about wages. This census introduced sampling techniques; one in 20 people were asked additional questions on the census form. Other innovations included a field test of the census in 1939. This was the first census in which every state (48) had a population greater than 100,000.

The 1940 census collected the following information: [1]

In addition, a sample of individuals were asked additional questions covering age at first marriage, fertility, and other topics. Full documentation on the 1940 census, including census forms and a procedural history, is available from the Integrated Public Use Microdata Series. 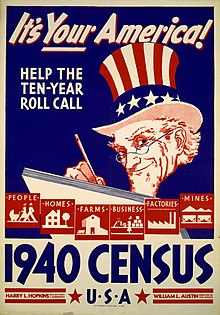 As required by Title 13 of the U.S. Code, access to personally identifiable information from census records was restricted for 72 years. [3] Non-personally identifiable information Microdata from the 1940 census is freely available through the Integrated Public Use Microdata Series. Also, aggregate data for small areas, together with electronic boundary files, can be downloaded from the National Historical Geographic Information System.

On April 2, 2012 [4]—72 years after the census was taken—microfilmed images of the 1940 census enumeration sheets were released to the public by the National Archives and Records Administration. [5] [6] The records are indexed only by enumeration district upon initial release; several organizations are compiling indices, in some cases through crowdsourcing. [7] 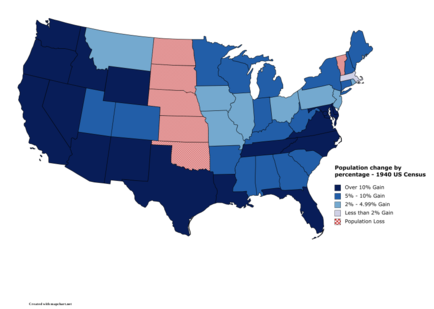 Use for Japanese American internment

During World War II, the Census Bureau responded to numerous information requests from US government agencies, including the US Army and the US Secret Service, to facilitate the internment of Japanese Americans. In his report of the operation, U.S. Army Lt. Gen. John L. DeWitt wrote that "The most important single source of information prior to the evacuation was the 1940 Census of Population." [11] [12] [13]