From Wikipedia, the free encyclopedia
Office skyscraper in Manhattan, New York
Map of buildings and structures at Hudson Yards. Zoom the map and click on points for more details.
This map:

10 Hudson Yards, also known as the South Tower, is an office building that was completed in 2016 [4] in Manhattan's West Side. Located near Hell's Kitchen, Chelsea and the Penn Station area, the building is a part of the Hudson Yards urban renewal project, a plan to redevelop the Metropolitan Transportation Authority's West Side Yard. Coach, Inc. is the anchor tenant. During planning, the tower was known as Tower C. [5]

Hudson Yards, conceived through a large master plan by Kohn Pedersen Fox Associates, is expected to consist of 16 skyscrapers containing more than 12.7 million square feet (1,180,000 m2) of new office, residential, and retail space. Among its components will be 6 million square feet (560,000 m2) of commercial office space, a 750,000-square-foot (70,000 m2) retail center with two levels of restaurants, cafes, markets and bars, a hotel, a cultural space, about 5,000 residences, a 750-seat school, and 14 acres (5.7 ha) of public open space. 10 Hudson Yards, the first building on the site, is expected to help draw visitors to the area. [6] 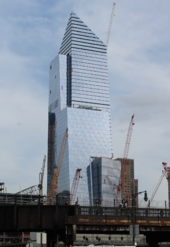 Groundbreaking for 10 Hudson Yards occurred on December 4, 2012, [5] [4] with a provisional completion date of 2016. [7] Foundation work continued through the first half of 2013 and the superstructure work began on the tower in August 2013. [8] During excavation work, 70,000 cubic yards (54,000 m3) of soil was removed and 11,000 cubic yards (8,400 m3) of concrete was poured. [9] The contract to construct the tower was awarded to a subsidiary of Tutor Perini in March 2013. [10] The tower is the first tower in the Hudson Yards complex to have been completed, because it is the only Hudson Yards tower not on the artificial platform over the West Side Yards. [11]

The southern facade of 10 Hudson Yards cantilevers over the 30th Street spur of the High Line, and one of the building's entrances is to be located on the High Line. [9] The architectural firm who designed 10 Hudson Yards was Kohn Pedersen Fox. [6] [9] [18] Thornton Tomasetti was the structural engineer; Jaros, Baum & Bolles performed the MEP engineering; and Langan served as lead civil engineer. [17] In January 2019, the developers unveiled a 30 feet (9.1 m) long sculpture by American artist Jonathan Borofsky for the west lobby. [19]

The first tenants were signed in April 2013. [20] The building is anchored by Tapestry, Inc.'s global headquarters, which covers 737,774 square feet (68,541 m2) on floors 9 to 24 within the tower. [9] [21] The company purchased their space in a complex transaction with Related. Tapestry paid more than $750 million for space in the new building while simultaneously selling their nearby headquarters at 516 West 34th Street. This allowed Related to erect portions of 50 Hudson Yards and the Hudson Park and Boulevard on the site. [22] Coach's space includes a 15-story atrium, double height conference rooms overlooking the High Line, a private cafeteria, and a large terrace with views of the Hudson River. [23] Coach was the first tenant to move into the new building on May 31, 2016. In September 2017, Coach subleased 148,000 square feet (13,700 m2) of space to The Guardian Life Insurance Company of America. [24]

There will also be retail space at street level adjacent to the retail building immediately to the north of 10 Hudson Yards. That building will be designed by Elkus Manfredi Architects. [29] Fairway, a locally based grocer, was expected to build a store in the lower floors of the building, occupying 45,875 square feet (4,262 m2). [9] [30] Additionally, Spanish chef José Andrés will operate a 35,000 square feet (3,300 m2) food hall named Mercado Little Spain which will contain a wine bar, a cocktail bar, and 15 kiosks serving different kinds of tapas. [31] An outpost of fast casual salad restaurant Sweetgreen opened in August 2018 in the base of the tower. [32]

10 Hudson Yards was initially owned by the master developers of the Hudson Yards project, Related Companies and Oxford Properties, in partnership with the Kuwait Investment Authority. Various sections of the tower were sold to tenants as office condos, with Coach purchasing their space for $750 million prior to construction. [33] In August 2016, Coach sold their stake in the tower to Allianz for $420 million. The deal gave Allianz 44% ownership and valued the building at $2.15 billion. [33] [34] In May 2018, the State Teachers Retirement System of Ohio purchased roughly 20% of the tower for $432 million at a similar valuation. [35] [36]