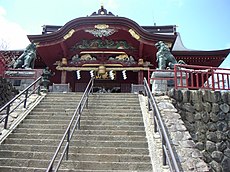 Ōme is located in the Okutama Mountains of western Tokyo, bordered by Saitama Prefecture to the north. The Tama River runs from west to east almost in the center of the city area, and the Kasumi River and Naruki River, which are tributaries of the Iruma River ( Arakawa River system), also flow from west to east in the north. The geography changes from the flat land in the east to the hills and mountains in the west. The highest point is 1,084 meters on Mount Nabewariyama on the right bank of the Tama River in the western end of the city.

The area of present-day Ōme was part of ancient Musashi Province. Ōme developed in the Edo period as a post station on the Ōme Kaidō highway. In the post- Meiji Restoration cadastral reform of July 22, 1878, the area became part of Nishitama District in Kanagawa Prefecture. The town of Ōme was created on April 1, 1889, with the establishment of modern municipalities system. Nishitama District was transferred to the administrative control of Tokyo Metropolis on April 1, 1893. Ōme was elevated to city status on April 1, 1951, by merging with the neighboring villages of Kasumi and Chōfu. Later in 1955, four additional villages (Yoshida, Mita, Kosoki, and Nariki) merged with Ōme.

Ōme has a mayor-council form of government with a directly elected mayor and a unicameral city council of 24 members. Ōme contributes one member to the Tokyo Metropolitan Assembly. In terms of national politics, the city is part of Tokyo 25th district of the lower house of the Diet of Japan.

The city has two public high schools operated by the Tokyo Metropolitan Board of Education. Tokyo Metropolis also operates one special education school for then handicapped.