From Wikipedia, the free encyclopedia
(Redirected from &)
Logogram (&) representing "and"
This article is about the symbol. For other uses, see Ampersand (disambiguation).
This article contains special characters. Without proper rendering support, you may see question marks, boxes, or other symbols.
"&" redirects here. For other uses, see & (disambiguation).
For help with using the ampersand within Wikipedia, see Help:&.

The ampersand, also known as the and sign, is the logogram &, representing the conjunction "and". It originated as a ligature of the letters et— Latin for "and". [1]

The term ampersand is a corruption of and (&) per se and, which literally means "(the character) & by itself (is the word) and." The symbol & is derived from the ligature of ET or et, which is the Latin word for "and."

— Geoffrey Glaister, Glossary of the Book [2]

Traditionally in English, when spelling aloud, any letter that could also be used as a word in itself ("A", "I", and, " O") was prefixed with the Latin expression per se ('by itself'), as in "per se A". [3] [4] [5] It was also common practice to add the & sign at the end of the alphabet as if it were the 27th letter, pronounced as the Latin et or later in English as and. As a result, the recitation of the alphabet would end in "X, Y, Z, and per se and".[ citation needed] This last phrase was routinely slurred to "ampersand" and the term had entered common English usage by 1837. [4] [6] [7]

It has been falsely claimed that André-Marie Ampère used the symbol in his widely read publications and that people began calling the new shape "Ampère's and". [8]

The ampersand can be traced back to the 1st century A.D. and the old Roman cursive, in which the letters E and T occasionally were written together to form a ligature (Evolution of the ampersand – figure 1). In the later and more flowing New Roman Cursive, ligatures of all kinds were extremely common; figures 2 and 3 from the middle of 4th century are examples of how the et-ligature could look in this script. During the later development of the Latin script leading up to Carolingian minuscule (9th century) the use of ligatures in general diminished. The et-ligature, however, continued to be used and gradually became more stylized and less revealing of its origin (figures 4–6). [9]

The modern italic type ampersand is a kind of " et" ligature that goes back to the cursive scripts developed during the Renaissance. After the advent of printing in Europe in 1455, printers made extensive use of both the italic and Roman ampersands. Since the ampersand's roots go back to Roman times, many languages that use a variation of the Latin alphabet make use of it.

The ampersand often appeared as a character at the end of the Latin alphabet, as for example in Byrhtferð's list of letters from 1011. [10] Similarly, & was regarded as the 27th letter of the English alphabet, as taught to children in the US and elsewhere. An example may be seen in M. B. Moore's 1863 book The Dixie Primer, for the Little Folks. [11] In her 1859 novel Adam Bede, George Eliot refers to this when she makes Jacob Storey say: "He thought it [Z] had only been put to finish off th' alphabet like; though ampusand would ha' done as well, for what he could see." [12] The popular nursery rhyme Apple Pie ABC finishes with the lines "X, Y, Z, and ampersand, All wished for a piece in hand". 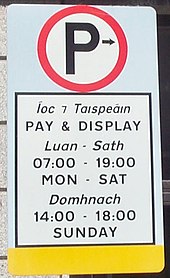 The logical conjunction symbol, ∧ is often pronounced "and," but is not related to the ampersand.

The plus sign + (itself based on an et-ligature [14]) is often informally used in place of an ampersand, sometimes with an added loop and resembling ɬ.[ citation needed]

Ampersands are commonly seen in business names formed from a partnership of two or more people, such as Johnson & Johnson, Dolce & Gabbana, Marks & Spencer, and Tiffany & Co., as well as some abbreviations containing the word and, such as AT&T ( American Telephone and Telegraph), A&P (supermarkets), R&D ( research and development), D&B ( drum and bass), D&D ( Dungeons & Dragons), R&B ( rhythm and blues), B&B ( bed and breakfast), and P&L ( profit and loss). [15] [16]

In film credits for stories, screenplays, etc., & indicates a closer collaboration than and. The ampersand is used by the Writers Guild of America to denote two writers collaborating on a specific script, rather than one writer rewriting another's work. In screenplays, two authors joined with & collaborated on the script, while two authors joined with and worked on the script at different times and may not have consulted each other at all. [17] [18] In the latter case, they both contributed enough significant material to the screenplay to receive credit but did not work together. As a result, both & and and may appear in the same credit, as appropriate to how the writing proceeded.

In APA style, the ampersand is used when citing sources in text such as (Jones & Jones, 2005). In the list of references, an ampersand precedes the last author's name when there is more than one author. [19] (This does not apply to MLA style, which calls for the "and" to be spelled. [20])

The phrase et cetera ("and so forth"), usually written as etc. can be abbreviated &c. representing the combination et + c(etera).

The ampersand can be used to indicate that the "and" in a listed item is a part of the item's name and not a separator (e.g. "Rock, pop, rhythm & blues and hip hop").

The ampersand may still be used as an abbreviation for "and" in informal writing regardless of how "and" is used.

The character in Unicode is U+0026 & AMPERSAND (&amp;, &AMP;); this is inherited from the same value in ASCII.

Apart from this, Unicode also has the following variants:

The last six of these are carryovers from the Wingdings fonts, and are meant only for backward compatibility with those fonts.

In URLs, the ampersand must be replaced by %26 when representing a string character to avoid interpretation as a URL syntax character.

In the 20th century, following the development of formal logic, the ampersand became a commonly used logical notation for the binary operator or sentential connective AND. This usage was adopted in computing.

Many languages with syntax derived from C, including C++, Perl, [21] and more differentiate between:

In C++ and PHP, unary prefix & before a formal parameter of a function denotes pass-by-reference. [24] [25]

In Pascal, the & as the first character of an identifier prevents the compiler from treating it as a keyword, thus escaping it.

In Fortran, the ampersand forces the compiler to treat two lines as one. This is accomplished by placing an ampersand at the end of the first line and at the beginning of the second line. [26]

In many implementations of ALGOL 60 the ampersand denotes the tens exponent of a real number.[ citation needed]

In Common Lisp, the ampersand is the prefix for lambda list keywords. [27]

Ampersand is the string concatenation operator in many BASIC dialects, AppleScript, Lingo, HyperTalk, and FileMaker.[ citation needed] In Ada it applies to all one-dimensional arrays, not just strings.[ citation needed]

BASIC-PLUS on the DEC PDP-11 uses the ampersand as a short form of the verb PRINT.[ citation needed]

Applesoft BASIC used the ampersand as an internal command, not intended to be used for general programming, that invoked a machine language program in the computer's ROM.[ citation needed]

In some versions of BASIC, unary suffix & denotes a variable is of type long, or 32 bits in length.[ citation needed]

The ampersand was occasionally used as a prefix to denote a hexadecimal number, such as &FF for decimal 255, for instance in BBC BASIC.[ citation needed] (The modern convention is to use "x" as a prefix to denote hexadecimal, thus xFF.) Some other languages, such as the Monitor built into ROM on the Commodore 128, used it to indicate octal instead, a convention that spread throughout the Commodore community and is now used in the VICE emulator. [28]

In MySQL, & has dual roles. As well as a logical AND, it additionally serves as the bitwise operator of an intersection between elements. [29]

In more recent years, the ampersand has made its way into the Haskell standard library, representing flipped function application: x & f means the same thing as f x.[ citation needed]

Perl uses the ampersand as a sigil to refer to subroutines:

In MASM 80x86 Assembly Language, & is the Substitution Operator, which tells the assembler to replace a macro parameter or text macro name with its actual value. [33]

Ampersand is the name of a reactive programming language, which uses relation algebra to specify information systems. [34]

In SGML, XML, and HTML, the ampersand is used to introduce an SGML entity, such as &nbsp; (for non-breaking space) or &alpha; (for the Greek letter α). The HTML and XML encoding for the ampersand character is the entity &amp;. [35] This can create a problem known as delimiter collision when converting text into one of these markup languages. For instance, when putting URLs or other material containing ampersands into XML format files such as RSS files the & must be replaced with &amp; or they are considered not well formed, and computers will be unable to read the files correctly. SGML derived the use from IBM Generalized Markup Language, which was one of many IBM-mainframe languages to use the ampersand to signal a text substitution, eventually going back to System/360 macro assembly language.

In the plain TeX markup language, the ampersand is used to mark tabstops. The ampersand itself can be applied in TeX with \&. The Computer Modern fonts replace it with an "E.T." symbol in the cmti''#'' (text italic) fonts, so it can be entered as {\it\&} in running text when using the default (Computer Modern) fonts. [36]

In Microsoft Windows menus, labels, and other captions, the ampersand is used to denote the next letter as a keyboard shortcut (called an "Access key" by Microsoft). [37] For instance setting a button label to "&Print" makes it display as Print and for Alt+P to be a shortcut equivalent to pressing that button. A double ampersand is needed in order to display a real ampersand. This convention originated in the first WIN32 api, and is used in Windows Forms, [37] (but not WPF, which uses underscore _ for this purpose) and is also copied into many other toolkits on multiple operating systems. Sometimes this causes problems similar to other programs that fail to sanitize markup from user input, for instance Navision databases have trouble if this character in either "Text" or "Code" fields.

Some Unix shells use the ampersand as a metacharacter:

Some Unix shells, like the POSIX standard sh shell, use an ampersand to execute a process in the background and to duplicate file descriptors.

The generic URL (Uniform Resource Locator) syntax allows for a query string to be appended to a file name in a web address so that additional information can be passed to a script; the question mark, or query mark, ?, is used to indicate the start of a query string. [39] A query string is usually made up of a number of different name–value pairs, each separated by the ampersand symbol, &. For example, http://www.example.org/list.php?order=ascending&year=2022.

Look up ampersand or epershand in Wiktionary, the free dictionary.